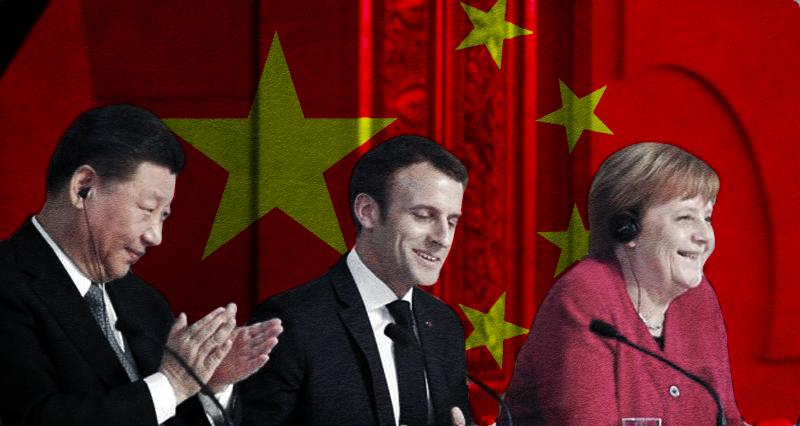 The President of P.R. of China, Xi Jinping, the Chancellor of Germany, Angela Merkel and President of France, Emmanuel Macron have held a trilateral summit on July 5. The three sides had already convened in April for a trilateral meeting.

The meeting covered a wide range of issues. The Spokesperson of the German Chancellor, Stefan Seibert stated that international trade, climate change and protection, specifically the need to limit CO2 emissions were on the agenda as well as the struggle against the COVID pandemic and the global distribution of vaccines.

The French foreign ministry provided details on the climate protection talks, mentioning “the end of finance for coal-fired power plants, that are needed to meet the objectives set for the evolution of greenhouse gas emissions and achieving carbon neutrality”.

The European side “welcomed China’s commitment to contributing to the restructuring of the debt of vulnerable countries within the Common Framework agreed at the G20. It is now urgent to implement this initiative and move forward on reallocating International Monetary Fund (IMF) special drawing rights, with the goal of raising $100 billion”, stated the French Presidency.

It also remarked that the three sides discussed the latest developments in Iran and Myanmar, and “The French President and the German Federal Chancellor mentioned their serious concerns as regards the human rights situation in China and recalled their requirements when it comes to fighting forced labour”.

President Macron and Chancellor Merkel reaffirmed European expectations as regards access to the Chinese market and conditions of fair competition.

“Noting the persisting severe situation of COVID-19 globally and the uncertain prospect of economic recovery, Xi Jinping said, the world more than ever needs mutual respect and close collaboration, rather than suspicion, antagonism or zero-sum game, calling on China and Europe to expand consensus and cooperation for the two sides to play an important role in properly responding to global challenges”, reported the Chinese Foreign Ministry in its declaration on the summit.

Xi stated that China-EU comprehensive strategic partnership is where “the greatest common denominators converge, proposed to held the 23rd China-EU leaders’ meeting “at an early date” and called to “safeguard the real multilateralism”.

The Chinese president also stated “The Belt and Road Initiative put forward by China is to create more opportunities for common development. China is ready to enhance dialogue and cooperation with all parties, at the same time, it will firmly defend its sovereignty, security and development interests. China hopes the European side can play a more positive role in global affairs, genuinely demonstrate strategic independence, and jointly safeguard world peace, stability, development and prosperity.”

The Chinese Foreign Ministry reported that the French President acknowledged China’s “great achievements in development”, emphasizing that France is committed to the “conclusion of the EU-China investment agreement, welcoming Chinese companies to invest in France”.

Reporting on the summit, the German daily newspaper Süddeutsche Zeitung reminded that in her youth, Angela Merkel had participated in classes of Marxism-Leninism in the Democratic Republic of Germany, concluding with pretty bad marks. In spite of that, the newspaper described Merkel’s policy as maintaining good economic relations with China, a policy that will not be very welcomed by the Biden administration. The latter has spent much of his recent tour thourgh Europe to build “an alliance of democracies against the authoritarian China”, reminded the German newspaper.

The German chancellor will visit the White House in the coming week.

The US newspaper Washington Post on the other commented the conclusion of the EU-China Investment agreement, titling “not so fast”. The newspaper mentioned that the agreement still needs approval by the European Parliament, some of whose members are actually sanctioned by China due to declarations on Xinjiang Uighur Autonomous region.

The American news agency Associated Press meanwhile reported that the three leaders agreed on the need to move the negotiations on the JCPOA with Iran forward in order to get a deal “as soon as possible” and avoid the risk of nuclear proliferation, citing a French official.