Super Tuesday: What surprises await Sanders and the Democrats 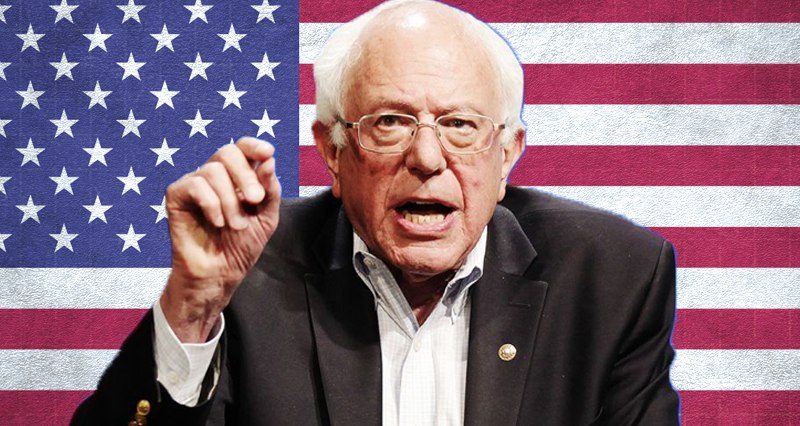 On March 3, the majority of Americans will be glued to TV screens across the US – on this date, President Donald Trump’s Democratic opponent for the 2020 presidential election will likely be announced.

What is Super Tuesday?

Tuesday is the traditional day for primaries and caucuses in the United States during presidential election years. The concept of “Super Tuesday” might be unofficial, but it has been used by journalists to describe this momentous day since about 1976.

Super Tuesday is the most important day for the primaries because it represents the moment when several key states all identify their potential candidates in advance at once.

Super Tuesday is the main political test for candidates running for president from their party. The large number of states holding primaries on the same day represents a huge challenge for presidential hopefuls, and can often either play into the hands of the candidates or wipe out their entire campaign.  This is considered the first truly national test for US presidential candidates. 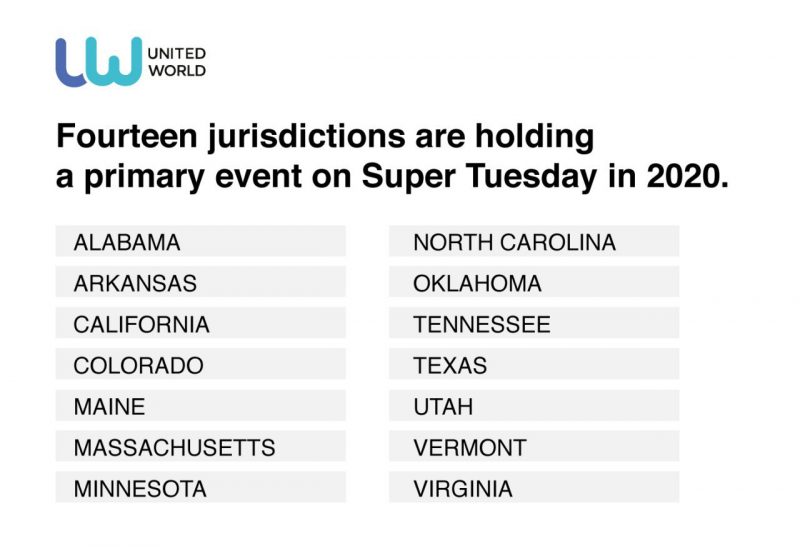 What will happen on Super Tuesday 2020?

Fourteen jurisdictions are holding a primary event on Super Tuesday in 2020:

So far, only four states have conducted caucuses – Iowa, New Hampshire, Nevada and South Carolina, which were the major first major stress tests for the Democrats.

Super Tuesday marks the day in the primary election cycle when it is possible to win the majority of delegates. This year will see 1,357 potential Democrats compete, more than a third of all delegates to the Democratic National Convention are up for grabs on a singular day (34% of the total number of delegates – 3,979).

So far, 101 delegates have been elected. The South Carolina primaries will be held this Saturday with 54 delegates, meaning a total of 155 delegates will have already identified on the eve of Super Tuesday. 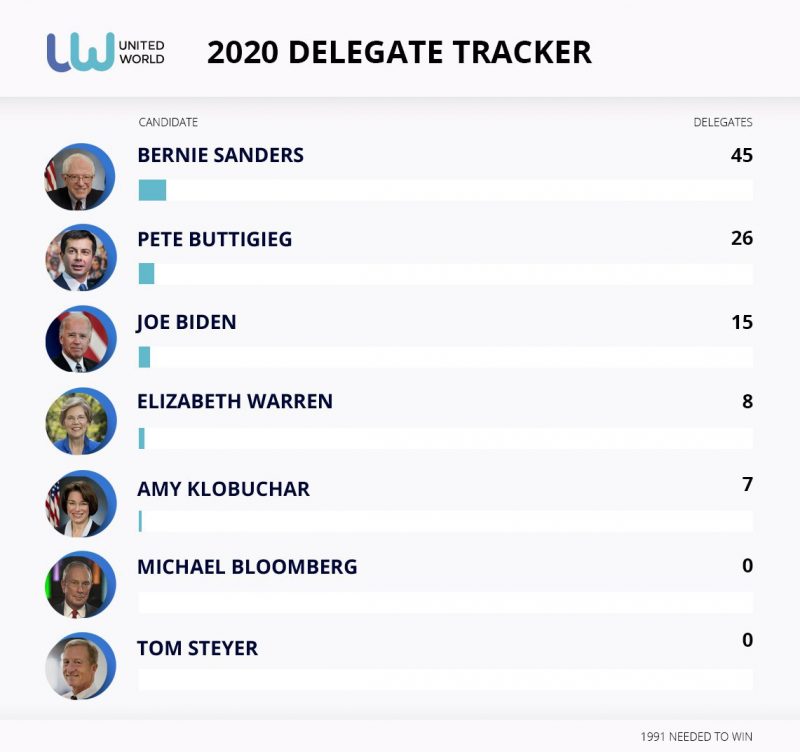 In order to win the Democratic Party’s presidential nomination, a candidate must gain 1,991 delegates out of 3,979 delegates.

Each state is represented at its party convention by delegates in proportion to its population. A single presidential candidate is chosen by a two-thirds vote of delegates to the Congress. State delegates to a national convention are chosen in two ways: primaries and caucuses.

For example, in the 2016 Republican race, Donald Trump won seven of the ten contested states on Super Tuesday, which was the key to success in the main elections.

Republicans can also vote in the presidential primaries in most Super Tuesday states, but since Trump has no competitors, all eyes are on the potential rival democrats.

Against Sanders and Bloomberg?

Recent polls show that Sanders has caught up to former Vice-President Joe Biden after a strong performance in Iowa, New Hampshire and Nevada.

Bernie Sanders remarkable victory in Nevada on February 22 was particularly startling for his rival, particularly given his success among Latin American voters. After his victory, the media began to say that it is likely Sanders will leave the Super Tuesday competition with a clear advantage.

My opponents would like you to think the ideas that we're talking about are radical. They're not. They're what the American people want. #DemDebate pic.twitter.com/dFlKPWWIgu

On February 14, a survey on YouGov showed that Sanders has an advantage over his opponents, especially in a potential one-on-one fight.

Sanders has a strong fundraising base and campaign organization that has made him popular in most of the states that will be deciding on March 3. Sanders is very popular in his home state of Vermont and is also a leader in polls in California and other states.

Nonetheless, in several states, he will face stiff competition from former New York Mayor Mike Bloomberg and possibly from Joe Biden, despite several recent blows to his campaign.

The presidency is a job that requires strong leadership and management.

It’s not about who can shout the loudest.

It’s about building a great team and delivering results — and I’ve proven as a mayor and a CEO that I get the big things done. #GetItDone#DemDebate

The Battle for South Carolina and black voters

Another important vote for the Democrats will be held before Super Tuesday. On February 29, primaries will be held in South Carolina. On the eve of the big battle, the candidates have already had debates there.

The debate was so chaotic and directed against each other that Trump was hardly even brought up until the last moment.

Former Vice President Joe Biden hopes to win, having secured the support of a large number of African-American voters in the state, which would help him return to the race and moderate the voter base’s passion of Sanders. More than half of the electorate in the primaries this Saturday will be black voters.

In the penultimate debate in South Carolina, Bloomberg was the main target of attacks, although Sanders face his share of animosity as well. Bloomberg is criticized for seemingly buying his way into the elections late in the game, the other candidates criticizing his high spending and attempts to fuel a split in the Democrat’s ranks, while Sanders is criticized for his “ideologism” and populism (recently, his opponents have even tried to accuse him of receiving support from Russia, just as Trump had been accused).

A survey conducted by NBC News/Marist College in South Carolina on Monday echoes what other poles have shown: Joe Biden still has the advantage and could potentially win the support of 27% of democratic primary voters, compared to 23% for Sanders and 15% for Tom Steyer. According to the survey, Biden could win about 35% of black voters with about 20% for Sanders and 19% for Steyer. However, there is always room for surprises…

This state will make or break Biden’s campaign. He is likely to try to make a pact with Clyburn (one of the most powerful democrats in the state). Clyburn’s support would help Biden achieve a much-needed victory before Super Tuesday.

If Biden proves popular with South Carolina voters it could improve his chances in other southern states where Super Tuesday polls will be held: Virginia, North Carolina, Tennessee, Alabama, Arkansas and Texas.

Naturally, Biden is going to do his best to keep Sanders from getting ahead in this critical state. Others, like Pete Buttigieg, are not even competitors there – the gay candidate was shamefully driven out of McDonald’s workers’ strike in Charleston, South Carolina, when he tried to join a protest. The workers demanded $15 per hour of minimum wage and chanted, “Pete can’t be our president!” citing Buttigieg’s poor performance in South Bend. About a dozen black women confronted him, saying he had not done enough for the workers in his region.

Meanwhile, Sanders, who has already increased his share of black votes without pandering as clearly as Biden, is betting on winning hearts and minds with attractive policies, including a $1.5 trillion childcare plan for American parents.

Last week, security officials said they had evidence that Russia was trying to interfere in the elections and that Moscow had specifically sought to support Sanders’ campaign. Sanders, of course, denies it.

“I say to Mr. Putin: ‘If president, trust me, you are not going to be interfering in American elections,'” he said at an appearance in California.

Sanders is approaching Super Tuesday with victories in Nevada and New Hampshire, entrenched in the delegations-rich states of California and Texas.

However, even if Sanders proves to be popular among voters, there is a trick that can be used by single parties if Sanders gets more votes, but less than the required majority. As they ended up doing in the last election, “superdelegates” are given a say and former delegates can be “freed” from the procedure. In fact, if Sanders does not win an absolute majority, he can very easily be removed by some very undemocratic party methods. They may invoke Sanders’ “undemocratic” nature, or his weakness before Trump’s candidacy – but in fact, other candidates may share their delegates between each other to nominate a single candidate and defeat Sanders.

“If “superdelegates” swung the nomination to a candidate with fewer votes, it would be confirmation that the country is ruled by elites rather than governed by the people,” the Guardian wrote describing that possibility.

As Sanders gathers momentum, he seems to be coming to a more difficult period. In the last debate in Nevada, most of his rivals chose to bring down the fire of critics on Bloomberg, who spent more than $400 million on television commercials, underestimating Sanders. However, the recent debates in South Carolina have shown that Democrats are most afraid of their leftist rival.

After Sanders’ victory in Nevada, Pete Buttigieg used his nightly factional speech to accuse the socialist of “an inflexible, ideological revolution that leaves out most democrats, not to mention most Americans.”

Joe Biden also attacked Sanders and Bloomberg, saying: “I’m not a socialist. I’m not a plutocrat.” Elizabeth Warren has also increased her criticism of Sanders in recent days, saying she doesn’t want a president who resorts to yelling at people.

Super Tuesday will be the most important indicator for the next Democrat presidential candidate… however, could any of these candidates actually beat Donald Trump? We will have to wait and see.