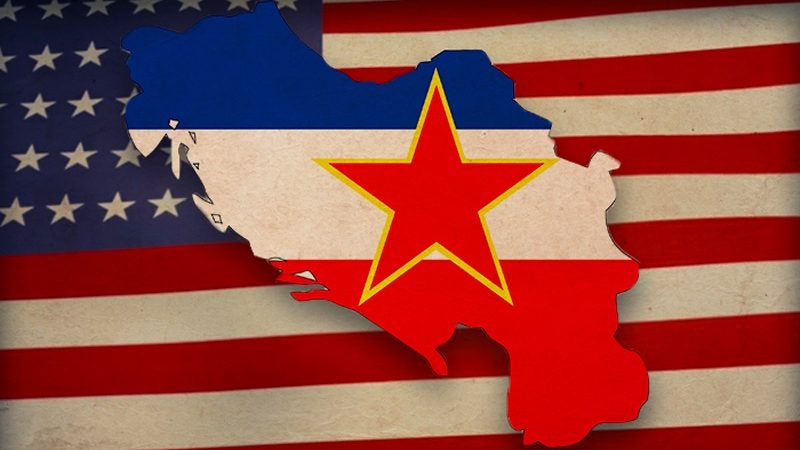 Today, there are three different attitude’s toward sovereignty, although these different outlooks differ not in how they define sovereignty, but the way various states or group of states interpret it.
They are:

– those who call for sovereignty – theirs and others

– those who call for their sovereignty, but disrespect others’ claims to it

The biggest international problems are created by the third outlook I mentioned. Among those who are given the right to execute international law, there are those who submit to it and those who do not.

Sporadic breaches of international law by individual states have shown that these types of problems can be solved. Even if there are several violations by a number of state actors, they can be still treated as unrelated events which are possible to handle individually.

But, what happens when large and powerful states – all of them Western, former or present colonizers – do not submit to international law, yet at the same time take part in building supranational institutions allegedly based on international law? What happens when they breach international lw somewhere in the world, and then try to defend their actions under the pretext that they are simply imposing the rule of international law? This is exactly what is happening today. Our contemporary international-political madness has been created by an interpretation of legal norms crafted by the same actors who called them into being in the first place: “law” has become an expression of arbitrary authority rather than due process. The entire international legal system is beginning to look something like Kafka’s ‘The Trail’ where those states without power play the role of Jozef K. The most obvious examples today are Ukraine and the artificial state of “Kosovo”. This kind of dead end situation raises many questions. Some of the most important are: who is doing what, on what basis and what is the purpose of their actions?

There are endless types of networks between states – bilateral, multilateral, humanitarian, cultural, regional, industrial, etc. all of which are devolving further and further into chaos by the day. This chaos  in turn  enables the dismantling and relativization of all universal concepts and phenomena, the degradation of their true meaning.

Even if supranational institutions define certain concepts and legal relations, this does not mean that their suggestions are meaningful – especially if those concepts and norms suggest or demand a country violate their tried and true laws in favour of some abstract, sterile and undefined unity or alliance (which is still in its own process of self definition, making its trajectory rather unclear).

It would be difficult within the scope of this essay to state any conclusive definition of sovereignty, especially given that I am from Serbia. There is no better example than Serbia for revealing the west’s double standards on these questions. The Serbian example shows clearly that the so-called international community (which is only a euphemism for Western powers) has no standard interpretation of the concept of the state, sovereignty, war, peace, territory, or occupation.

Serbia is one of the founders of many key international organizations and one of the first signatories of various international legal agreements – be it as the Serbian Kingdom, or Socialist Yugoslavia after WW2 or as the modern Republic of Serbia… yet, this has not stopped the so-called international community from applying whatever “solutions” they want, often in open defiance of the legal precedents they had agreed to.

Does contemporary international legality actually serve to thwart sovereignty, and even morality?

When the ‘rule of law’ is invoked (The West’s favorite phrase to use when they intend to violate local countries’ sovereignty), there is often a serious breach of ethical norms. The new supranational institutions, like European Union, often break both formal and ethical laws in the process of “humanitarian intervention”. It is worth noting that the imposition of these new laws and standards in Eastern Europe are both discussed and enforced in English. This raises the question, where does the sovereignty of the European Union itself then comes from?

The Neo-liberal model of governance was founded in England and exported to its colonies, and then the rest of the world. The ideology implies the rule of world financial institutions, investment banks, hedge funds, insurance companies, powerful multinational (actually, private) corporations – all operating in connection to the private security and military apparatus. When it comes to light that a state security apparatus is corrupt and has stopped working for the benefit of the people and the state, the implication is that these entities have started to work for the globalists’ neo-liberal apparatus instead. This is what is meant by the mysterious term the “deep state”. The “deep state” does not actually have physical substance…  it only exists within the processes and interconnections of the aforementioned political actors.

In the newest forms of warfare against sovereign people and nations, the economy has became the primary tool of neo-liberal ideology and practice. As recently stated by the Director of Defence Studies of The Centre of National Interest (USA): “Economy becomes a source for getting power parity.” This statement is aimed at China first of all, but it also shows the strategic approach of the neo-liberal apparatus which mobilizes economic measures as a mean of warfare against militarily and financially weaker countries – sanctions are one measure which have become very popular in the past few decades. That is why the neo-liberal model is a deceptive one for any state – it operates through dissolving the state in question from the inside, under the cover of democracy, human rights, rule of law, equality, and the free market (whatever that means). That is why the neo-liberal model has developed extensive fiscal networks based on increasingly complex economic operations, including the new crypto-currency market – in order to hide the incapability of current the so-called New World Order to actually handle the economy it has created.

Apart from the security sector/state apparatus and the economy, there are also other interconnected tools which the neo-liberal model uses to siphon power from a sovereign country: the media, NGOs, marketing and advertising agencies, parts of academia, the global entertainment industry – all of these actors are on the payroll of the neo-liberal apparatus. They all work to persuade people that life is about the individual living in the “now”, totally erasing any sense of collective identity or history. They keep their victims in constant state of anxiety and immediate temporality.  The ideology of “living in the now” is unconsciously underlined with the fear of death and transience. The concept of ready-made, instant, and momentary life deprives human beings of anything aside from the material. It is as if contemporary global pop culture, uniformity and repetition has short-circuited memory in order to keep the population in a constant state of anxiety, hysteria and disconnection from their roots.

The uprooting of humans from their native soil and natural habitat results in their disconnection from civilization and the beginning of a new mythology. The new myths are spread by cultural Marxists, cosmopolitans, and alliances of brainwashed elites who are in a state of constant antagonism with the majority of society. The Neo-liberal model aims to end the era of human rootedness and all connection to ones’ homeland and soil. Disconnection becomes the only way to exist, survive and prevail. Loud, hysterical and screaming elites worldwide try to overpower the majorty, who still do not fully understand what is happening, having been deceived  and distracted by global media and pop culture.

Human beings are not fish. Human beingscan not rule the sea. Human beings can not even keep afloat, only sail, supported by technical and technological advancements. While at sea, human beings encounter natural challenges they are not ready for. This results in frustration, since they believe themselves to be special and exceptional. The seas and oceans were not crafted for human beings to rule and occupy. The fact that three quarters of the Earth are covered in water should make people aware that there are natural boundaries and borders for humankind.