Is a Turkish-Russian gas hub to deliver energy to Europe feasible? 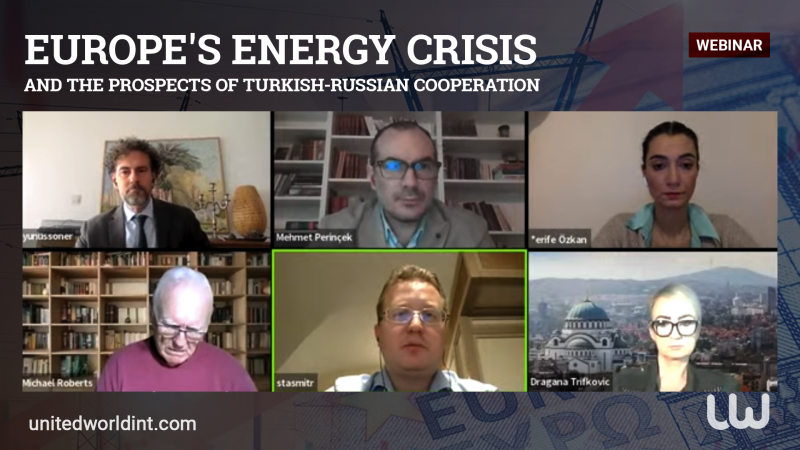 The experts discussed the proposal of Russian President Putin to establish a gas hub in Turkey and thus provide energy transfer to Europe, a proposal that was already highly welcomed by the Turkish government.

Russian expert Mitrakhovich: Are Europeans willing to buy Russian gas at all?

Stanislav Mitrakhovich delivered the opening statement. He emphasized that currently all rules of international trade were being destroyed. For Mitrakhovich, the proposal of a gas hub in Türkiye is indication that the Russian President Putin wants to fight for the European market. But he questioned whether Europeans were willing to buy Russian gas at all. Currently, he added, has Europe decreased its gas imports from Russian from 40 to 8%. The continent is seeking alternatives in countries like Qatar, Azerbaijan, Nigeria and Algeria. But it tries to impose the planned price cap on these countries as well, which results in a loss of confidence towards the European Union there.

Europe is not freezing and will come through this winter, but increasing prices and forced savings have already reduced the continent’s competitiveness and caused industrial migration to other parts of the world. Notwithstanding, Europe blocks the transfer of needed technology to Russia. German companies that have been active even in times of the Russian Empire have cancelled all cooperation. Even if its domestic problems may change Europe’s policy within 1 or 2 years, said Mitrakhovich, but even than would just the repair of Nordstream take a year alone. As for the gas hub, if there is the according political will Europe, a working mechanism will be found, concluded Mitrakhovich.

Turkish expert Nesimioğlu: Obstacles remain, but the hub would be a “dream coming true” for Türkiye

The second expert to speak was Dr. Şerife Özkan Nesimioğlu from Türkiye. After briefly describing the process that led to the gas hub proposal, Nesimioğlu stated that Russia was already planning alternative energy delivery routes. Nesimioğlu said that from Russian perspective, the hub would enable Russia and Türkiye to set gas prices and mix Russian gas with energy from other sources. From Turkish perspective, it would respond to the fact that natural gas is the country’s weak link in national energy security.

Nesimioğlu stated that the project received strong support from the Turkish government, but some questions still remained: She calculated that 3 to 4 years were necessary to build the necessary infrastructure, being unclear that, even if built, someone would by the gas. She also said that the Turkish energy market had liberalization and legal issues that needed solution, and that neither the Kremlin nor Gazprom had yet delivered a cost-estimate. Despite these questions, Nesimioğlu said, the establishment of such a gas hub would mean for Türkiye “that a dream comes true”.

Serbian expert Trifkovic: There is no alternative to Russian gas

The third speaker was Dragana Trifkovic. “There is no substitute for Russian gas neither in Serbia nor in Europe” claimed Trifkovic, and added: “We think that the US administration is using the Ukrainian crisis to cease energy suppliers of the old continent from Russia. The International Energy Agency, world experts and energy companies warned that there are not enough stocks on the planet that could compensate for any shortage of Russian gas on the European market.”

Trifkovic also described the situation in Serbia as follows: “In the foreseeable future there is no expectation for the diversification of gas supply sources which should make competitive market and energy independence possible. In addition Serbia has neither infrastructure nor technology for eventual delivery, processing and storage of liquefied gas, and it is estimated that would cost slightly lesser than 1 billion dollars. In the next 10-15 years there will be no alternative to Russian gas for Serbia, so it is impossible for our consumers to replace it with something else.”

British expert Roberts: Construction start within 2-3 years not probable – but the world is in rapid transition

The last speaker in the webinar was Michael Roberts from the United Kingdom. Roberts stated decidedly that the West is not going to by any energy from Russia in the coming decade, with the political purpose being to strangle Russia’s energy position and income with sanctions, price caps. He said that the storage capacity was at maximum this winter, thus no freeing was expected.

But the prospects were fully unclear for the coming years, with alternative energy sources creating huge costs, Roberts said, adding this would cause a great worsening in people’s living standards and accelerating the already visible trend to economic recession. Roberts said that for instance the German GDP was expected to decrease by a historic 3%, causing a significant economic hit that will not be revolved soon. As for the gas hub, Roberts was suspicious on whether the project was realistic as long as the war in Ukraine continues. He added that technology transfer problems were affecting pipeline construction, concluding that a construction in the next 2-3 years was not probable. Despite that, Roberts also stated that the world was in transition and especially the Gulf countries changing axis in favor of Asia, thus making sudden changes in Europe’s energy policy also possible.