Kosovo and Serbia: The background of the dispute and the US plan for the annexation of Kosovo to Albania 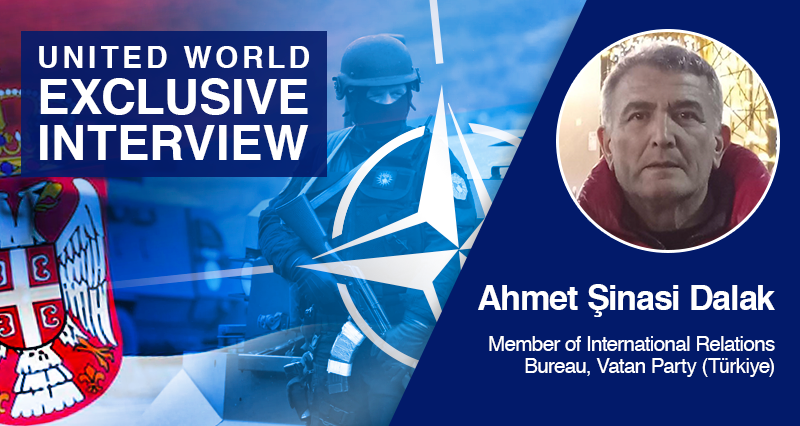 “It is not surprising that these provocations are taking place because Serbian Prime Minister Aleksandar Vucic has declared that Serbia does not support and will not participate in US and EU sanctions against Russia. Vucic also said that NATO bombed and divided Yugoslavia, that many people lost their lives during that time and that they did not forget what they went through, that they are grateful for the help of Russia and China in those difficult days.”

The tension between Serbia and Kosovo escalated on 31 July, ahead of the new Kosovar law set to come into effect on 1 August, making it mandatory for everyone, including Serbs living in Kosovo, to have a Kosovo identity card and number plate. Serbs living in Kosovo parked trucks, tankers and other vehicles near two key border crossings with Serbia, forcing police to close the two crossings to protest the new rules. After escalating tensions, Kosovo agreed to delay the new rules for 30 days.

Serbian President Aleksandar Vucic Vucic said the following: “No matter how difficult it is, there will be no surrender and Serbia will win. … I almost knelt in front of them and begged them. In the end I got a promise. The situation is much more complex… We will try to preserve peace at all costs, I ask the Albanians to come to their senses and that the Serbs do not fall prey to provocations.”

Vucic also thanked Russia and other countries for their support to Serbia: “I want to thank those who supported Serbia…I especially want to thank the representatives of the Ministry of Foreign Affairs of the Russian Federation, who reacted in a very correct way.”

On the other hand, Kosovo Prime Minister Albin Kurti defended the planned measures: “There is no place for tensions, there are no possibilities for instability because we are doing something legitimate and legal. Those who speak of violence, blockages, instability and tensions are speaking about themselves, not for us.”

NATO’s peacekeeping mission in Kosovo, KFOR, on the ground since June 1999, with a mandate to maintain peace and security in the region, on Sunday evening said that it is “prepared to intervene if stability is jeopardized in the North of Kosovo”.

The Kosovo Force NATO-led international peacekeeping force in Kosovo (KFOR), announced that it is “ready to intervene when stability be at risk”, and “it will resort to all necessary measures to maintain stability”.

Russia called on Kosovo, US and EU, to stop “provocations” and to respect Serbs in Kosovo. It is stated that “Kosovo’s new rules on personal documents for local Serbs is another step toward their expulsion from Kosovo” in the statement released by Russian Foreign Ministry.

We asked Ahmet Şinasi Dalak, a member of the Vatan Party’s International Relations Bureau, who has been living in Serbia for many years and closely keeping abreast of the political developments in the Balkans, about the dispute in Kosovo, its background and the attitude of the US, EU and Russia on the issue.

What is happening between Kosovo and Serbia? Can yo explain it with its background?

There is a region called Kosovska Mitrovica, where Serbs live in Kosovo. There have been such provocations in this region in the past too. There are people here who have Serbian identity cards and cars with Serbian number plates. The Kosovo government had announced a deadline for replacing them with Kosovo identity cards and Kosovo number plates. The deadline was July 31st. These are various provocations for Serbia to recognize Kosovo as a sovereign state.

A group of Albanians living there are holding demonstrations. These groups are threatening Aleksandar Vucic, saying “you will end up like Saddam.” There are also Riot Police units in this area at the moment to ensure security. In addition, the Serbian government is blocking the roads in and out of the area to prevent any provocation.

The reason behind: Serbia’s rejection of sanctions against Russia

What will be the outcome if Kosovo insists on replacing Serbian identity cards and number plates with Kosovo ones?

Kosovo cannot achieve Serbia’s recognition of Kosovo in this way. There have already been negotiations between the two countries on this issue recently, but nothing has been concluded.

It is not surprising that these provocations are taking place because Serbian Prime Minister Aleksandar Vucic has declared that Serbia does not support and will not participate in the US and EU sanctions against Russia. Vucic also said that NATO bombed and divided Yugoslavia, that many people lost their lives during that period and that they did not forget what they went through, that they are grateful for the help of Russia and China in those difficult days.

Russia will not remain neutral on the issue; it will support Serbia. They have already made a statement in this sense. Russia stated that what is happening in Kosovo is a provocation. There is a big US base in Kosovo. There are also forces from the European Union there. Russia, of course, is well aware of this.

Kosovo’s dependence on the US

Then, can we safely argue that the Serbia-Kosovo dispute is also a US-Russia one?

Of course. In fact, it would even be more accurate to call it a dispute between the US-NATO-European Union and Russia. Such provocations, such attempts are not the kind of actions that Kosovo can decide and implement on its own. Kosovo has no such determination and power. Kosovo cannot act without the support of the US behind it.

The plan for the annexation of Kosovo to Albania

Also the US, NATO and the EU are planning Kosovo’s annexation to Albania. They want to detach Kosovo from Serbia completely and annex it to Albania. By doing so, they aim to extend the corridor towards the sea. If a referendum were held in Kosovo today, the vast majority of the people would vote for unification with Albania. Needless to say, propaganda and the people in the media, who specifically strive for this, have a tremendous influence on the public.

Extending the corridor towards the sea

You mentioned a plan to extend the corridor. Could you give some details about this?

Kosovo has no access to the sea. The idea is to provide logistical support to Kosovo from those areas connected to the sea. These connecting points are ports like the Albanian port of Tirana. Other components of the plan are to leave Bosnia a small corridor and to create a port by dividing Croatia.

The need to re-evaluate the Balkans

Current developments in the Balkans need a fresh outlook. The period after the collapse of Yugoslavia should be analyzed well. Just to give an example; the whole coast has been given to the Croats. The most beautiful and touristic places on the Dalmatian coast belong to Croatia. These coasts are well connected to Europe by highways and are vacation destinations for the whole of Europe. Croatia generates a huge amount of income from it. And unlike Croatia, Bosnia and Herzegovina, Kosovo, Serbia and Macedonia do not have access to the sea.

What do you think will happen next?

At the moment, people in Serbia are at ease because they know that this is a provocation. Unless these provocations escalate to a deadly level, Serbia will not intervene in the region. The Serbian government is experienced and cautious in such cases. More serious incidents took place in the past. These provocations are meant to keep the Kosovo issue on the political agenda. Another goal is to drive the Serbs out of Kosovo. Naturally, there is also a struggle against it by the Serbs living in Kosovo.

Şafak Erdem was born in Istanbul in 1993. He completed primary and secondary school in Istanbul, then studied philosophy and sociology as an undergraduate at Boğaziçi University. He is currently doing a master's degree in philosophy at Leibniz University Hannover.