Past and future of the Alba Movements 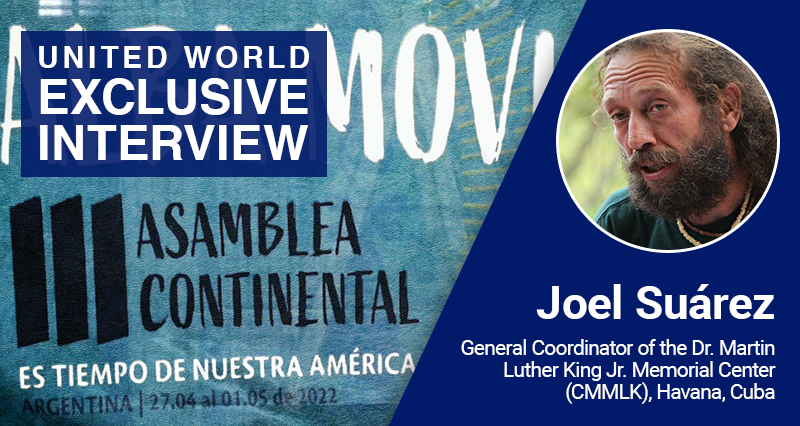 The III Continental Assembly of ALBA-Movements was held in Buenos Aires, Argentina, from April 27 to 1st. May 2022. It is an articulation of social and popular movements that belong to countries that are not part of the Bolivarian Alliance for the peoples of Our America (ALBA). ALBA was founded in 2004, promoted by Hugo Chávez and Fidel Castro, within the framework of the rejection of the FTAA, which the United States tried to impose in Latin America.

In this framework, one of the civil society actors that has accompanied the formation of this space of articulation, since its inception, is the Martin Luther King Center in Havana, Cuba. United World International had an opportunity to make an exclusive interview with General Coordinator Joel Suarez Rhodes, who spoke to us profoundly about ALBA-Movements, its history, its difficulties and its importance.

Joel Suárez is the General Coordinator of the Dr. Martín Luther King Jr. Memorial Center (CMMLK), which is part of the International Council of the World Social Forum (WSF), and is a member of international networks such as Jubileo Sur and La Vía Campesina. Beyond the borders of Cuba, in particular in Latin America and the Caribbean, the Martin Luther King Center supports initiatives that come from the people, as well as their struggles against neoliberal policies, free trade, debt and militarization, social exclusion, climate change, racism, homophobia, xenophobia, and gender discrimination, among other causes.

What is the ALBA Movement?

The ALBA Movement is a space for articulation of social movements, hemispheric popular movements; it includes groups from the United States and Canada, but we have a much greater power in Latin America and the Caribbean.

The ALBA Movement was born out of an attempt to settle a debt with Chávez; when Chávez and Fidel launched the Bolivarian Alternative of the Americas (ALBA) in 2004, as a regional integration mechanism. And of course governmental in that political, revolutionary and progressive map, who lived in Latin America, Chávez had the common sense that this mechanism should not only be of the governments, but should also integrate the peoples.

In this context, Chávez planned two political innovations. Since it was an innovation, that carried a risk, he runs the risk of dying while trying or being carried out. The first innovation is that it is not only a governmental integration but also an integration of the peoples. And the peoples, not only, express themselves through their popular and social organisations. And this cannot be specified.

Chávez adds a second innovation to this conception; it is not only that social and political movements of the ALBA member countries are involved in this integration, but there are also other countries whose governments are not part of the ALBA integration mechanism. Therefore, the governments of the countries outside ALBA were never going to be able to get through government channels to integrate ALBA, and, in this way, Chávez tried to spread ALBA from the peoples.

What were the difficulties of that ALBA process from the peoples?

In the first place, popular movements are not homogeneous and unique expressions in our societies; rather they express the tensions of the popular camp, of the left-wing camp and each historical process in each country, as well as their sectoral differences… And, in some ALBA member countries, relations between governments and social movements were not really favourable. So, Chávez’s innovation of setting up a Council of Social Movements of ALBA, which -moreover- had almost the same level of hierarchy as the Council of Ministers of the ALBA governments, could not materialise in practice.

Evo Morales had emerged from the movement

In this regard, speaking of Hugo Chávez and Evo Morales, as two presidents who had a relationship with social movements within the government structure created in Alba, let me remind that Evo had emerged from the movement (coca growers), he was the founder of the Latin American Coordinator of Rural Organizations (CLOC), of La Vía Campesina (LVC) in Bolivia. Then, together with the movements, we decided to build a space with relative autonomy or, in parallel, with autonomy from the construction of the governmental ALBA. That’s why the space is called: Articulation of Social Movements -not from ALBA- but towards ALBA.

What is the outstanding feature of constituting the articulation of social movements towards ALBA?

This refers to the years starting from 2006 until 2009; when the Charter of the Social Movements towards ALBA was presented for the first time at the World Social Forum in Belén do Pará. It is a process of permanent construction because we are a political transnational structure that receives funding neither from governments nor from foundations. And, therefore, we rely on the great voluntary contributions by the social movements that made it up. Within this framework, the Secretary of the Movements towards ALBA spent time in Brazil, with the support of the Landless Movement (MST), and now she has moved here, to Argentina.

So, with the difficulties of seeing popular and social movements as a continental agenda and beyond the borders of the American continent, it should be noted that there is a permanent mechanism for updating our strategic lines of action, our lines of work.

What are the fundamental axes along which ALBA works with the peoples?

There are the fundamental axes such as education, political training, communication, the battle of ideas, discussions from the grassroots and logically in social networks as well. Another very important line of action is internationalist solidarity and the issues that we left a little behind. But we are committed to promote; many of these social and popular movements that are gathered here come from practices, experiences, and work at the territorial level, including the experiences of the popular and solidarity economy. As in here, in Argentina, in Uruguay, Brazil, like the MST, which is not only a popular movement for the struggle for agrarian reform but also for its settlements, they have outstanding agro-ecologically based production.

ALBA is a process in itself

Therefore, this transnationalization of popular and solidarity economy, which must play with the logic of the international market, but is also driven by the logic of cooperation and solidarity, must be promoted. For all these, ALBA is more than a congress of established organisations, it is always a process of institutionalisation, construction, renovation… And, in this sense, its lines of action are also being renewed, because we are very attentive to social, political, economic realities etc. that crosses the American continent and the world.

What is the role of social movements in the current regional and global context?

We know what happened after this map and political territory created by progressive governments, frankly, there was a strong attack from the right, from US imperialism, and we suffered major setbacks. In this sense, movements act between resistance, hopes and alternatives. Now there is a political scenario that could be different in Latin America right now: the victory of MORENA and López Obrador in Mexico; the victory of Xiomara Castro in Honduras; despite all the limitations these governments might have, Gustavo Petro’s probability of winning in Colombia and Lula’s return to Brazil.

So, the sustainability of all these political processes will therefore depend on mobilisation, on what the social movements can promote, and whether or not today’s (and future’s) progressive governments promote it. Therein lies the vital importance of social movements throughout Latin America and the Caribbean.