Lula’s Presidential Campaign: Launch of the Popular Committees of Struggle 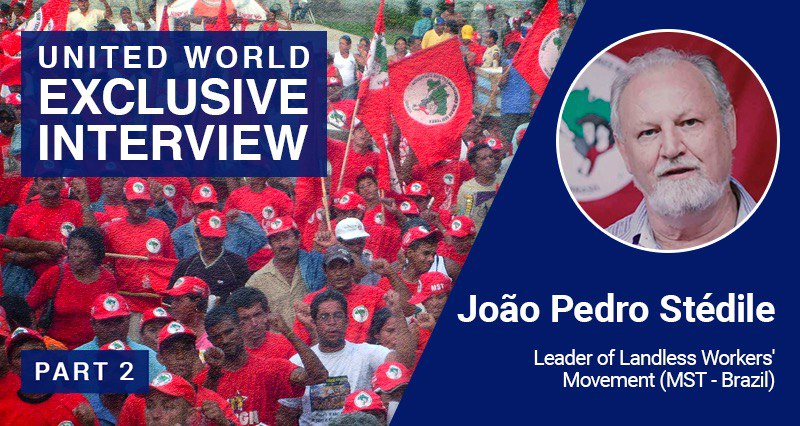 During the end of March and April, United World had an incredible opportunity to share the intense political agenda of Joao Pedro Stédile, accompanying him through various locations in, one of the most representative states of the Brazilian northeast, Rio Grande do Norte (RN). The leader and National Coordinator of the Landless Workers Movement of Brazil (MST) carried out several political activities of great relevance, among which we highlight the launch of the Popular Committees of Struggle to debate from the grassroots the Popular Project for Brazil and to guarantee Lula’s victory in the next presidential elections, to be held in the South American giant on October 2, 2022.

UWI: What are the Popular Committees of Struggle?

JPS: The Popular Committees are a historical experience, which is not copied from anyone or any other country, since historically, all peoples have been organized in nucleus. And we have also done the same throughout the class struggle, here in Brazil. The recent examples are the “Free Lula”, “Fora Bolsonaro” committees, the “Popular Brazil Network”; at that time, it was about keeping the continuity in organizational methods that have given us good results.

The Popular Committees are the meetings that brought together all people who want to elect Lula as president of Brazil in 2022 and contribute to improving the lives of the Brazilian people. The Committees can be organized by street, by community, by neighborhood, city, by place of study or work, by sectorial struggle, digital committee and around pre-candidates, parliamentary mandates and all possible forms of organization that facilitate the person meeting..

Therefore, all people of all ages, genders, sexual orientations, races, party affiliations, religious beliefs etc. can participate in the Popular Committees; people who hold some kind of leadership in the communities, be it popular, social, political, religious, and cultural. In short, all those people who are willing to participate in a massive campaign process to achieve our goals can join.

What is the importance of the Popular Committees in the current context?

We should encourage mass struggle as much as possible. We cannot make the mistake of telling the most needy people in Brazil, those who have tangible financial difficulties, that “Lula will solve their problems.” No. Problems will be solved through popular mobilization, if the people fight for their rights. On that way, mass struggle is a necessity; because, it is the mass struggle that raises awareness among the populations. The housing problem, the problem of hunger, employment, and land can be solved struggle of the masses.

In short, in order to carry out the class struggle, transform the mass campaign that will lead Lula to the presidency, the organization of the people is fundamental. Therein lies the essential and concrete importance of the Popular Committees.

What are your main objectives and what do you pursue with them?

As we have been saying, in addition to discussing a popular project for Brazil and contributing to raise the political consciousness of the Brazilian people, we want to build a popular organizational structure, throughout Brazil, that stimulates a broad, plural, organized and combative campaign around the official presidential candidacy of Lula da Silva.

Before the month of August, the Workers’ Party (PT) cannot carry out an official campaign for Lula, no political party can do it. However, we can; the organized people can. Moreover, the people who do not belong to any party, or those militants of other parties that are not of the PT, for example, the militants of the Partido Libertad y Socialismo (PSOL) or other allied parties, do not have the obligation to join the PT; to discuss a government program, they can do it in the Popular Committees of struggle.

The discussion notebook establishes some objectives of the Committees, for example:

– Building popular committees of struggle, actions and activities in the neighborhoods, municipalities and regions of each of the states and the federal district of Brasilia.

– To resume and value the grassroots work to listen and dialogue with the Brazilian people.

– Discussing the proposals of a popular project for Brazil,

– Organizing people in such a way as to carry out the necessary struggles to defend their rights and democracy.

– Contributing to the political formation of the militancy through studies and practical tasks.

– Working for unity between social, popular and partisan forces.

– To fight for the defeat of neo-fascism, denial, right-wing hatred and violence campaigns, and frankly, defeat their candidates at the polls.

– Contributing to the election of progressive governors and a broad group of parliamentarians in the state Legislative Assemblies and in the Brazilian National Congress.

– Giving a battle of wits, contributing to the popular fields in the communities and generating strategies of territorial and cultural dimensions of Brazil.

Finally, what stands out from this organizational stage?

The Popular Committees of Struggle, whether from the MST or from the CUT, cannot be just a meeting of militants, who gather to discuss Lula’s campaign, pamphlets, agitation and propaganda… No, the debate should also lead us to discuss what we will do with our country Brazil. And this unfolds into two planes: 1- Emergency Plan, or what Lula must begin to do when he assumes the presidency, on 1 January 2023. The people must discuss this emergency plan. 2- Popular Project Plan for Brazil; this plan has a sense of structural change for our country. It is not an emergency, but a profound change of paradigms, to debate about: What is the Country Project? What does it mean to develop the country? How to built an egalitarian society? What are the Brazilian cities going to be like and how transportation is going to work? That is a new type of human relations.

The Committees are then going to mark the political agenda of Lula’s presidency, because they are going to contain the changes that the people are demanding from the State, from the Brazilian government today and historically. Our idea is to hold a great national demonstration, already in August 2022, and deliver the result of the debates of each popular committee to Lula. But it is clear that Lula in four years will not be able to solve the problems of the capitalist crisis. Having said that, Lula can manage the necessary structural changes to move Brazil forward to a better future, we cannot have illusions that are unfeasible. We are determined and hopeful in this.