“Turkey holds the key to relations with Egypt” 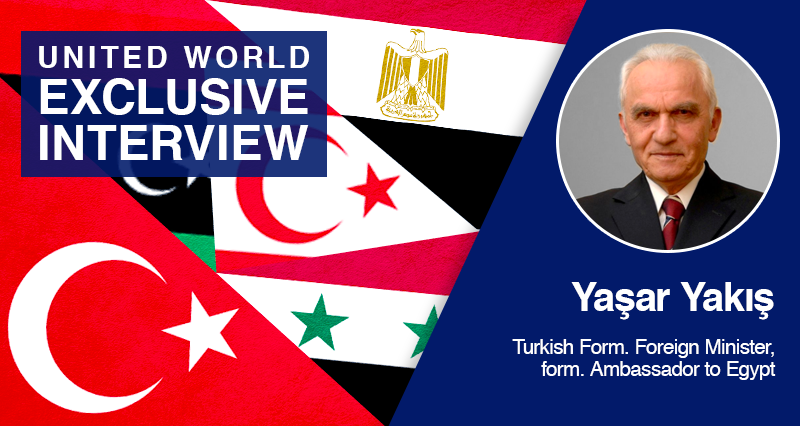 Yaşar Yakış, born 1938, is a founding member of Turkey’s governing Justice and Development Party. Yakış has been Minister for Foreign Affairs 2002 – 2003 and Member of the Turkish Parliament between 2002 and 2011.

Yakış entered the Foreign Ministry in 1962 and served different posts in Belgium, Nigeria and Syria as well as being part of the Turkish NATO delegation and UN representation.

Yakış was appointed Ambassador to Saudi Arabia in 1988 and Ambassador to Egypt in 1995. After retiring from the Foreign Ministry in 2001, Yakış became founding member of the Justice and Development Party, where he has held positions of Deputy Chairman and member of Executive Committee.

Yakış answered the questions of United World International in Ankara.

How do you interpret the comments made by the Turkish Government on Egypt recently?

As with the Turkish-Egyptian relations, Egypt had no problem with Turkey. It was Turkey that created the problems. Now, Egypt has done something right that they had to do anyways. If you ask me, whether this will make the past be forgotten immediately, I would say ‘maybe not immediately’. The biggest problem between the countries is Turkey’s support for the Muslim Brotherhood. As long as this policy continues, Egypt’s hesitations will continue too. The recent gesture of Egypt and softened talk of Turkey will not solve the problem immediately.

Turkey and Egypt are two key countries in the Eastern Mediterranean. What effects are to be expected if they sign an agreement on Exclusive Economic Zone (EEZ) border limitations? How would such an agreement change the political balances?

Turkey should have started earlier to work on the EEZ border limitations. When mutual diplomatic representation was lowered from the level of ambassadors to charge d’affairs, the probability of limiting EEZ borders also decreased. Simply, as a result of diplomatic relations being cooled down. Egypt still has waited a long time for Turkey. Their position was ‘let us wait till Turkey and Greece limit their EEZ borders, and than we will act accordingly’. Mr. Abdurrahman, former Egyptian Ambassador to Turkey, explicitly stated this in a Turkish TV channel program. He said: “We have waited a long time for Greece and Turkey to determine their own EEZ borders. But when we saw that they did not do it, we were forced to make EEZ demarcation agreements among the four of us, Israel, Greek Administration of Southern Cyprus, Greece and Egypt.”

Besides all that, there is a striking situation in the Eastern Mediterranean: The 10 km2 big island of Meis (Kastellorizo in Greek) receives an EEZ of 40 thousand km2. Why? Because the island belongs to Greece. This is a striking example. Egypt has not accepted that approach. When they agreed with Greece on mutual EEZ, they expressed that the situation of Meis Island is excluded from the agreement. They made the gesture by saying ‘we don’t accept the border line here’. If Turkey and Egypt had agreed upon the EEZ from the beginning on, than Egypt would have gained a lot too.

But as this has not happened, Greece won. But Egypt still maintains its position on the island of Meis. Cairo has sent Athens the following message: “The island of Meis does not entitle you to gain maritime space four times the size of your country.” Right now, Turkey is trying to make sense of this message. And that depends on how the Turkish-Egyptian relations continue from now on.

Can the Egyptian message to Greece also be understood as a message to the US too? Is Egypt able to develop cooperation with Turkey independently from the US?

The Egyptian foreign policy is a quite strong one. If you ask me to name the important states of the Middle East, I would count three: Egypt, Turkey and Iran. It is not much taken into account, but Egypt is a leader of three different international organizations. First of all, it is the undisputed leader of the Arab League. Secondly, it is one of the most important countries of the African Union. And thirdly, it is one of the three leaders of the Non-Aligned Movement, tough this has lost somewhat its importance today. In my tima as Permanent Representative of Turkey to the UN in Vienna, I witnessed a striking situation:

When a speech was to be held on behalf of the Arab League, some one from the Egyptian Embassy spoke. When a speech was to be held in the name of the African Union, the same man stood up and held the microphone. And then, he took the floor again in the name of the Non-Aligned Movement. And of course he spoke on behalf of Egypt, too. So, the same person was holding speeches in the UN Vienna representation on behalf of four different institutions. Now that provides a certain diplomatic weight, naturally. Thus, Egypt would not give up its own interests just because the US wanted, and it will not do so.

Therefore, in the current circumstances, Turkey holds the key for the bilateral relations in its hand. If Turkey does not limit to certain, acceptable level its support for the Muslim Brotherhood, then it’s not right to expect a reconciliation.

There was a coup d’état in Egypt. Sisi has overthrown a government, which was dominated by the Muslim Brotherhood, and took over the power. All countries of the world have invited Sisi to official visits. The whole world pursues relations with Egypt to some extent; Turkey is left behind as the only country resisting this. And when we take into account that our diplomatic representation in Egypt is below the level of ambassadors, this stance still continues. Currently, declarations only are all that’s made. It was said that intelligence agencies were meeting up, but this has not yet led to an official meeting of the Foreign Ministers.

The threat of Muslim Brotherhood emanating from Libya

Let us take a look at how the new government in Libya was established. Turkey made here very differentiated and balanced declarations, welcoming the according relations and its result. Egypt did the same. So at the end, the winner of elections was not Fethi Bashagha, who is close to Turkey, nor Akile Saleh in Tobruk, who is close to Egypt. Both Turkey and Egypt have recognized and greeted the electoral victory of a third party.

Turkey supports the UN recognized legitimate government in Libya. There, Turkey stands at the right side. But the same Turkey does not recognize the Bashar Al Assad Government in Syria, which also is a UN recognized government. If the same criteria is to be applied, than Turkey has to recognize the Assad Government just as it recognizes the Tripoli Government. That difference, that contradiction needs an explanation. Our view on the PKK threat from Syria is just and exactly the same as Egypt’s view on the Muslim Brotherhood threat emanating from Libya. This is the reason why they have so close relations with Hafter. Because Hafter operates right across their border.

And how can a common ground be found?

If the current established government accepts the results of the upcoming elections, if these elections bear a strong, threefold government, and if Turkey and Egypt support that government, then a compromise can be found.

And Turkey has signed de EEZ demarcation agreement with Libya…

The agreement between Turkey and the Tripoli Government on EEZ demarcation is very important. With this agreement, we have opened a window south of Crete. We signed this agreement with the legitimate government. That was a very good step. Now, everything depends on the current process, on the picture that emerges following the elections. For the time being, the process seems to evolve normally. Both countries support the interim government. Therefore, reconciliation can be expected. Turkey has a strong standing in Libya. Ankara says “I have sent soldiers to this country following an agreement with the legitimate government, thus, their presence is legitimate”. Turkey has to continue this strong standing, and it is possible to do so until the elections are finished. The situation afterwards depends on the position of the then elected government.

Steps would affect the Eastern Mediterranean too

In summary, in your opinion, what are the steps Turkey needs to take?

My guess is that, the Egyptians demand primarily an end to Turkish support for those activities they consider harmful. Therefore, events in the Eastern Mediterranean are connected to this first step. The US supports the PKK in the north of Syria. If Washington stops supplying arms to the PKK, than part of Turkish demands will be fulfilled. Likewise, if Turkey diminishes its support for the Muslim Brotherhood, than Egypt may start a process of reconciliation. Turkey holds the key.

How would Turkish-Egyptian cooperation affect regional countries, for instance the Turkish Republic of Northern Cyprus or relations with Syria?

Egypt considers Syria as part of the Arab world. There is a saying in the Middle East: “In the Middle East, no war be fought without Egypt, and no peace can be made without Syria”. I have witnessed all different periods of Turkish-Egyptian relations, and I have served as Ambassador to Egypt and than as Foreign Minister. Based on this, I can state clearly: Both Ankara and Cairo has a lot to gain from Turkish-Egyptian cooperation.

Egypt as the leader of the Arab world can play a positive, constructive role in the events in Syria. Any political project in Syria is difficult to realize, even if the US is behind, even if Russia is behind it, when it’s opposed by Egypt. When there’s a problem with the Arab League, Egypt takes the lead.

Concerning the Turkish Republic of Northern Cyprus (TRNC) has Egypt from the beginning on sided with the Greeks and Greek Cypriots. The Turkish-Israeli relations are now at the desired level, the Turkish-Azerbaijani relations are perfect, and the Israeli-Azerbaijani relations are good. So, Israel tries to repair its relations with Turkey via the Azerbaijan. If we are able to place the TRNC into this package, of course primarily on Azeri side, in we can convince Azerbaijan to support the TRNC’s recognition as an independent state, than we can also convince other countries to recognize the TRNC. This idea is circulating. Of course Egypt does not appear in this equation. If Egyptian-Turkish relations develop to become very close, and other countries in the world recognize the TRNC, than Egypt in time may follow too.

How are the economic prospects in the bilateral relations?

Mubarak’s Minister of International Economic Relations, Rashid Muhammad, had established an exclusive industrial development zone only for Turkish companies, in order to incentivize them to establish factories in Egypt. That zone was located outside of Alexandria, in the neighborhood of Burj el Arab. That was a project unseen in the world. Our business people have established 72 factories there. These relations continue till today. But on the other hand, if an Egyptian bureaucrat receives paper that demands his decision concerning the activities of a Turkish factory in Burj el Arab, well, than he might say “yes”, or he might say “No”. The economic relations were established perfectly formerly, today, they are not like that anymore.