US’ lies about China’s Xinjiang debunked 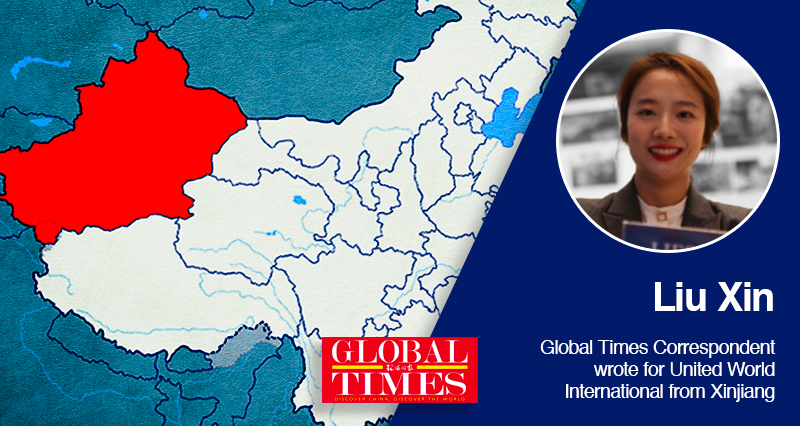 Recently, the international community has witnessed a new round of hype in some Western countries on the topic of the Northwest China’s Xinjiang Uighur Autonomous Region. This time, the US and its Western allies are trying to label China’s actions as “genocide” – a severe accusation against humanity, but one that also unveils the political purposes behind the accusation.

Foreigners who have never been to China’s Xinjiang may be easily fooled by reports circulating on Western media, with many so-called “victims” crying about their “tragic experience” in Xinjiang. But if readers are willing to take a deeper look into their stories, they will find that many of their remarks are self-contradictory and shallow lies.

Tursunay Ziyawudun, the only one who claimed to be a “victim” of “gang-rape” in the BBC report, said that she lived with her husband in Kazakhstan and her passport was confiscated when she returned to Xinjiang. She went to the training center in 2018 and left it at the end of that year. She then went back to Kazakhstan and fled to the US.

Funds change testimonies, people turn into victims entering the US

After a small digging, I found that this is not the first time that Tursunay appeared in Western media reports. When Tursunay was first interviewed in Almaty, Kazakhstan on October 15, 2019, she made no allegations of rape or overly harsh treatment.

Then, in an interview with the US-based Buzzfeed News on February 15, 2020, Tursunay said, “I wasn’t beaten or abused.” These remarks contradicted the BBC’s report of many “distressing” details.

In the BBC report, Tursunay claimed that her earrings had been “yanked out” causing her ears to bleed. But in the Buzzfeed report, this part was described as the police asking the women to take off their earrings.

A website named Moon of Alabama listed all the changes in Tursunay’s “testimonies” and noted that it was when the US-based and funded Uyghur Human Rights Project found her and helped her go to the US in September 2020 that the woman suddenly became a victim of “gang-rape” in a “camp” in the BBC report.

The changes of Tursunay’s “testimonies” showed us how untenable her remarks were. It also showed that BBC, who boasts itself as “objective and fair” media has abandoned professionalism when reporting China. This is also the reason why it has been barred from airing in China.

Another story shows how biased BBC’s Xinjiang reports are. In a report released on December 15, the BBC claimed that “New evidence suggests that upwards of half a million minority workers a year are being marshalled into seasonal cotton picking under conditions that again appear to raise a high risk of coercion.”

However, data released by the agriculture department of Xinjiang in 2020 showed that the total cotton plantation area in Xinjiang reached 24.19 million mu (1.6 million hectares) and around 16.90 million mu were harvested by machines, accounting for 70% of the plantation area. Also, 95% of the cotton in northern Xinjiang was harvested by machines and the mechanization rate in southern Xinjiang has increased steadily.

Aside from factual mistakes, the BBC’s report contains a massive amount of guesswork. The BBC report claimed that its reporters including John Sudworth were “stopped” when “filming the perimeter of the complex.” Sudworth and his team released video footage of them arguing with some people outside the factory. Film of a man who tried to cover the camera was uploaded online, and the BBC said that although they filmed in public areas, they were stopped by “officials.”

I went to that factory and learned details of people who were involved with the incident, learning a side of the story that BBC did not tell. Jiang Yong, the man who tried to cover the BBC’s camera, told me that “They totally distorted the facts!” Jiang is not an “official” as the BBC claimed but the deputy manager and head of the logistics department of the Pomegranate Seed Garment Co.

The BBC reporters never required to go into the factory but they claimed in their report that ethnic groups in the factories are “forced” to work there.

I stepped into the factory and found it is nothing special compared to other clothing factories. I randomly talked to a girl who told me her name is Aliye Ababekri. Aliye said this is her first job and her current monthly salary is 2,500 yuan ($382), which is expected to increase soon. She said that the job helps her achieve a dream from childhood – to learn clothing design.

She also invited me to visit her dormitory nearby the factory – She shares a fully equipped apartment with five other women and they have decorated the walls with paper flowers they cut.

I have visited Xinjiang many times in the past few years and the more I went there, the more I realized how ridiculous the accusations made by some Western media. These stories are only a small part of the net of lies made by the West.

I went to visit Istanbul many years ago and still remember the feelings when seeing people of different colors happily talking in streets and the prayers in the mosques – all show this is a place for people to enjoy a peaceful life. China’s Xinjiang is also a place with gorgeous landscapes and people of different ethnic minorities. Thanks to the government’s anti-terrorism measures, local residents are enjoying a peaceful and better life there.

However, the stable situation in Xinjiang may upset the US and some certain countries and they began to spread disinformation on China’s Xinjiang – from “camps” to “forced labor” and from “sterilization” to “genocide.” These lies were made with the purpose to slander China in the international community, especially in the Islamic world.

Many foreign journalists are not fooled by the lies

Not everyone has been fooled by these slandering. Many foreign journalists, experts and party leaders I have interviewed debunked accusations against China’s Xinjiang and shared with me their own experience in visiting the region.

Last month, I happened to meet a French writer Maxime Vivas. Based on his two visits to Northwest China’s Xinjiang Uygur Autonomous Region in 2016 and 2018, he wrote a book titled Ouïghours, pour en finir avec les fake news (Uygurs, to put an end to the fake news).

He told me that he has observed incredible dynamism in the Xinjiang region during his visits. When I asked him what he thought of the “forced labor” accusation in China’s Xinjiang, Vivas said “Forced labor? Our media have gone too far.”

“They said that in Xinjiang, there are ‘500,000 Uygur slaves in the cotton fields.’ Unfortunately, they could never show us satellite photos by which we would see these “unfortunate” people, probably guarded by hundreds of thousands of armed police! In France, in my region, when the time for the harvest arrives, our wine growers call on grape pickers from Spain, Morocco, etc. They are not called “slaves,” but “seasonal workers,” Vivas told me.

Actually, few people in the West have a clear understanding of where China’s Xinjiang region is and what is the real situation there. Last month, I found a huge error committed by the US-based CNN on its Xinjiang reports.

For US CNN, Xinjiang is a dot near Hong Kong

CNN mismarked China’s Xinjiang – a region that takes up one-sixth of the whole country’s territory – as a small dot near Hong Kong in South China. The small dot is a town in Guangdong with its name having the same pronunciation as Xinjiang. Without even getting the location rights, CNN reporters and US experts are boasting that they care about “human rights” there. How ridiculous!

Lies repeated a thousand of times cannot become truths. I think disinformation on China’s Xinjiang would be gradually dismissed with more foreigners coming to see the region.

I hope more foreigners and those from Turkey can visit Xinjiang one day and see the Grand Bazaar in Urumqi, take a visit to the Id Kah Mosque in Kashi Prefecture, talk to busy but happy workers in yarn factories in Aksu Prefecture, see children enjoying free education in any villages in Xinjiang, get a taste of local food – the lamb and the baked bread with ingredients inside; and enjoy the gorgeous scenery in Altay.