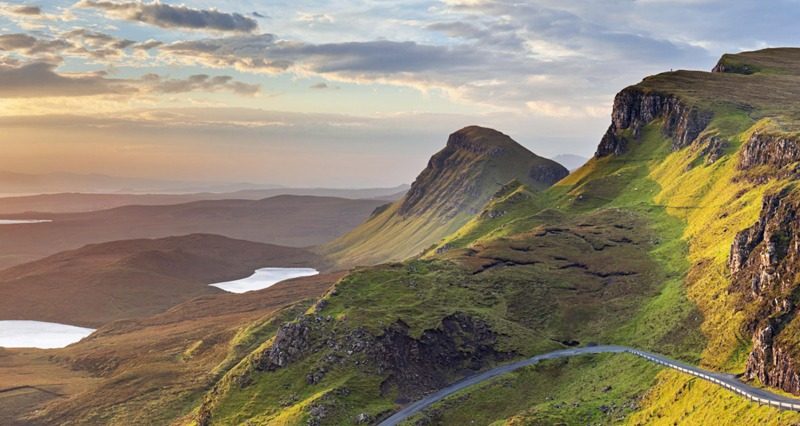 The UK outside the EU – equals Scotland and Northern Ireland outside the UK. Put simply, the United Kingdom will cease to be united, and only England (with Wales, pushing more and more for separation) will continue on. Edinburgh and Belfast (in British colloquial political nomenclature Holyrood and Stormont) will determine their own future.

For Ireland, this means the unification of the entire Green Island, for Scotland it means returning onto the World map 311 years after the Acts of Union (1707), which abolished the real independence of the country, an agreement which was essentially purchased by British gold.

„What force or guile could not subdue,

Is wrought now by a coward few,

The English stell we could disdain,

But English gold has been our bane-

Such a parcel of rogues in a nation!”

– this is how the national poet of Scotland, Robert Burns (whose monuments are nowadays on the streets of cities from Tweed to Shetland) described the loss of his countries independence. Today, in the opinion of the analysts, and most importantly – of already more than half of the population – it is time to settle this treacherous transaction and close accounts with England.

As is commonly known – the Scots are an exceptionally open and friendly people, and one of the few nations that has generated a version of nationalism which does not have even the slightest elements of jingoism or xenophobia… unless of course the foreigner in question is an Englishman …even this, however, is an exaggeration – of course the Scots cheer on anyone playing against the English in any sport, but their historically, politically and economically justified reluctance towards their neighbour have not included any aggressive forms of resistance for some 270 years. Unlike the Irish Republicans (quite similar in other aspects) – Scottish independence supporters have rejected the path of violence, choosing the difficult, long march through the legal politics and social pressure. The result of their patience is not far off.

During the Scottish Independence Referendum (2014) only 250,000 votes were missing to have the change take place. Apart from very serious doubts related to the counting of votes – Westminster used the European argument in the campaign, scaring Scottish voters (including the multitude of immigrants, mainly from Central Europe – Poles, Hungarians and Balts, having the right to vote) that “independent Scotland will be definitely and irrevocably out of EU”, “future Scottish currency will be not convertible”, “the Scottish economy is going to collapse, and of course “all immigrants will be thrown away and expelled”, without any rights to work in the new Republic.

Of course, all of it was trumped up by British politicians and propagandists, but effectively played on people’s fears, especially people who sought participation and cooperation with the European Communities, and so called the New Scots. It is not difficult to guess, that the situation (including the attitudes of this part of voters) has diametrically changed in context of BREXIT.

A stalemate has developed in the UK’s pending withdrawal from the EU. A Soft-BREXIT which sees Britain remaining in the Common Market and Customs Union and maintaining the priority of European legislation, is obviously a problem for the majority of “Leave” voters, implying the formula “European duties without European rights”. However, at the same time, the No-Deal BREXIT scenario is unacceptable for those who had just wanted to reject the political dictate of Brussels, without breaking any others ties with the continent. It is also important to keep in mind the strong anti-BREXIT opposition in Scotland and Northern Ireland, whose residents mostly voted “Remain” (62% in Scotland and 56% in Northern Ireland).

Theresa May’s Government clearly does not know what to do, repeating invariably that “the negotiations will continue”. But even favourable European partners are already responding to London: “What do you want to negotiate, if you do not know what you want?!“.

The Scots, however, do know what they want. The claim for a second Independence Referendum has formally been made by the Scottish National Party (ruling in the Holyrood), and although the Scottish national government has officially suspended these procedures while the progress and results of BREXIT pend – a wide social movement, beyond political parties, and focused around the “YES2” postulate – is not wasting any time.

Smart Enough to be Independent

During the last several months “I Would Walk 500 Miles – March for Independent Scotland” (inspired by the famous song of The Proclaimers,  a band which openly supported Scottish freedom and sovereignty) has been passing through the Scottish cities, through the moors and picturesque scenery known from hundreds of movies and music videos. On the 6th October 2018, over 125,000 Scots stood in the Holyrood Park in Edinburgh at the call of the independence movement, demonstrating unambiguous support for the Second Referendum demand… and the YES supporters are much better prepared this time.

The arguments for independence directed toward the so-far unconvinced and hesitant – are primarily economic. The independence movement points that a free Scotland will not be a “financial black hole” as Westminster suggests. On the contrary – it is enough to remind that the UK today has one main export product: Scottish whisky and one significant natural resource: gas fields on the coast of Scotland. And moreover Scotland produces:

Has there ever been a country better equipped for independence than Scotland? – activists of YES2 Movement are asking this question, the answer to which has become the slogan of their campaign: “Big Enough. Rich Enough. Smart Enough” – to be independent.

Voters should also be persuaded by limitations connected with the present level of Scottish devolution – which is expected to be an event more restricted after BREXIT, together with competences of Stormont and The National Assembly for Wales in Cardiff Bay. Independence activists argue: “As part of the UK, Scotland spends £3bn per year on defence but only £1.7bn of that is actually spent in Scotland. Scotland could afford a secure, effective, nuclear-free defence force & make substantial defence budget savings whilst still inventing more in Scottish forces that the UK does. Scotland pays £2.8bn per year to help finance the UK’s debts. A sensible negotiation on debt, based on solid legal principles and refinancing on Scotland’s terms, could save up to £2 billion pa in interest payments. Westminster spends more than £2.8bn per year on UK governance outside Scotland but “on Scotland’s behalf”. Moving those jobs back to Scotland would save substantially on hiked-up London prices and would result in an economic boost of £400mln-2bn pa in additional tax revenue for Scotland”. And these are serious arguments for the Scots, who are used to counting every farthing. It is understood that in the coming Second Referendum, the most important factor will be the votes of these who voted “No” in 2014, including so called New Scots – and the attitude of past Unionists.

For newcomers from Central Europe, the most important consideration seems to be the same arguments they were threatened with four years ago. Now, it is Scotland that wants to remain in the European Community, and the UK which means uncertainty about the future of immigrants (whether this fear has any ground at all). In Scotland, there is no doubt about the right to work and labour mobility, the flow of capital and goods will be maintained, in other words, everything that economic migrants from the East care about is ensured. Scotland is also unbelievably safe, and it will be even safer in context of international affairs – declaring full neutrality, rejecting participation in any military block, and expelling nuclear weapons from its territory (both British and American). Scotland is finally ready to issue its own, fully convertible currency, and its potential is enough to keep employment and, consequently, to finance the pension system.

For the New Scots – an independent Scotland will be a real home, which Britain (in its depth racist and xenophobic) never could, and would not even like to be.

Much more difficult is the position of past Unionists. Those who had voted against independence, but also against BREXIT are now stuck, because such a viewpoint is not expressed in British politics. So, they have to re-evaluate their point of view, what is happening now, when part of this category of voters declare for Scotland – just because of… rationality. This is also an explanation of a usable approach for Scottish government in regards to the European question. For Scots, it is less an ideological choice, and more a question of pragmatism which will enable them to achieve independence. A Scotsman always will be just a Scotsman first, and a European only when it suits him…

On the other hand, small determined opponents of independence who support BREXIT – are in the worst situation. I am talking primarily about Scottish farmers and fishermen who want to get rid of the muzzle of the EU and are counting on new transatlantic and British Commonwealth markets.

Today, producers of food and fish hear that the competition from the EU on the British market will not stop end in a Soft-Brexit variant, and that the offer of possible US, Canadian, Australian and other partners would not turn out to be as attractive as it was said in 2016. And therefore, their enthusiasm for resisting independence has considerably decreased in the hearts and minds of the deceived faithful subjects of Her Majesty…

Taking all this into consideration, it is in the interest of Holyrood to resist BREXIT, especially the No-Deal version (and that is what Scottish parliamentarians in the House of Commonsimpressively express)…yet, at the same time, silently understanding that things will go on, and in the end… BREXIT will happen, bringing expected and under developments which Mrs. May’s Government has already managed to accumulate.An Independent Scotland (as well as a United Ireland) will be in sharp contrast to this mess as a reasonable, calm and safe alternative. Because today’s Scottish independence is not just a matter of a romantic poem or another emotionally-influenced film or series about a beautiful past (by the way, soon you will be able watch another production about the iconic independence movement figure, the 14th-Century King of Scots, Robert the Bruce). Today, voting “Still YES” is simply a rational choice for the future for everyone living in Scotland.

One response to “A Kingdom Divided”