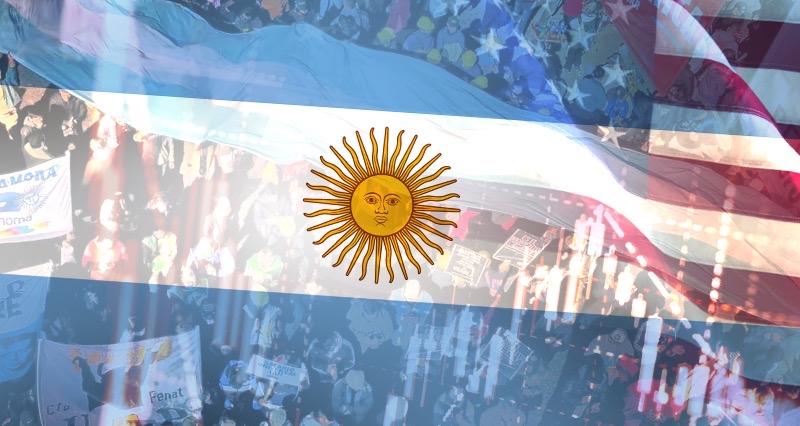 The government of the Frente de Todos in Argentina, which at first promised to be a national and popular restoration against the social and economic ravages of the neoliberal Macrism, ended up being a consolidation of the same model.

At first sight what appears is the defrauding of the electoral contract that promised to disown the illegal and illegitimate Foreign Debt, granted by the IMF even violating its own statutes, in a vain desperate attempt to guarantee the continuity of Macrismo; to end with the lawfare that results in a sort of proscription on Cristina Fernandez, the leader that generates more popular expectation and today is the powerful vice president; to prioritize salaries, retirements and popular consumption over the financial party that was unleashed during Macrismo. None of that happened.

In the last few days, with the arrival to the Ministry of Economy of the lawyer Sergio Massa, a cycle of growing advance of the sectors related to the United States and its model of global governance ended, to the detriment of the small attempts of resistance by some leaders and officials who speculated with the possibility of a government orientation in accordance with the times in the world today.

The daily life of the Argentine people is going through a deep economic crisis as a result of the agreement with the IMF, which results in an uncontrolled inflation, a price boom, a growing and pronounced loss of the purchasing power of salaries, growth of the informal economy, job insecurity, collapse of the productive system resulting in the loss of thousands of jobs. Poverty and indigence have grown at shameful rates in a country with so much wealth. Social protest is growing exponentially although it is still within the limits that allow governability, but there is great discontent.

There is economic growth, exports and imports are growing, but this is the big business of the transnational agribusiness, mining and energy companies that have assaulted the national economic structure and absorb the enormous profits in a country where the concentration of wealth is growing day by day.

The banks are the other winners of this scheme that are dedicated to financial speculation and are the main responsible for the Argentine deficit that grows with each millionaire issue of currency by the Central Bank, whose owner is a lobbyist of the private banks, for the sole purpose of responding to the demands for the execution of bonds held by the banks.

Before taking office, this government had notable conditions that President Alberto Fernandez accepted without major resistance at the time when he had the most power of his own. Important and key officials were imposed to recompose the relationship with the United States, the Federal Reserve and the International Monetary Fund. There, on the one hand, Gustavo Béliz, who resolved to limit the grimaces of autonomism that Alberto Fernández sometimes made in international policy, and the Minister of Economy, Martín Guzmán, whose mission was to guarantee the payment of the debt to the private sector (called vulture funds) and with the multilateral organizations. Other minor officials in the then scrapped Ministry of the National Economy were in charge of deepening the export matrix, facilitating the installation of transnational corporations and reorienting the energy production matrix for exports. It is not obvious to point out that all this resulted in the implosion of the possibility of national productive development.

In the midst of a growing economic uncertainty, in the face of the impossibility of minimum previsions in daily life, and with great discontent, with an uncontainable inflationary escalation, Minister Guzmán resigned.

The situation opened a possibility of general reorientation with the appointment of Minister Silvina Batakis, who was received with great expectations by all sectors, especially those sectors aligned with Cristina Kirchner.

She could not hold her position for more than two weeks and was immediately challenged after her trip to meet with the head of the US Federal Reserve, the head of the IMF, and CEOs of Goldman Sachs and JP Morgan, among others.

The United States decided that the best Minister of Economy for Argentina is Sergio Massa, who has public friendships with the Chief for the Western Hemisphere of the US State Department, Juan González and the current US Ambassador to Argentina, Jack Stanley.

It is a sector of the American establishment that has appointed the current minister who assumes with a refoundational imprint, with the agreement of important sectors of the national economic power and with the blessing of the embassy and the State Department. The great doubt is whether these agreements and blessings of which the new minister boasts are enough to build calmness in the convulsed Argentine economic climate.

In principle, he has increased his prestige and power within the weakened ruling coalition; today he is the coalition’s strong man. He has the agreement and discreet support of Cristina Kirchner. The president has been reduced to a dangerous figurehead. He has no real function.

When we say dangerous figurehead we are basing it on the eventual resignation of the president that would provoke a succession crisis of unimaginable results. The natural successor would be Cristina Kirchner, who is currently going through one of the lawfare trials that are being followed and where she will probably be condemned because the judiciary is absolutely aligned in the production of lawfare.

What is coming in the immediate future is the fulfillment of the ten measures announced by the Minister and the possibility of normalizing the situation or derailing it completely, which would be the final chapter of a government in frank regression.

The announcements were clear and have to do with; resolving the fiscal order, ensuring trade surplus, rebuilding reserves. Fulfilling the goals of reducing the deficit, this is only possible through adjustment; bringing monetary emission to zero; removing subsidies to consumption and public services, which directly impact on workers’ pockets; foreign exchange is expected to be rebuilt from export growth.

The great challenge is on prices and wages and that is a matter that depends on the strength of the business corporations and workers’ unions.

In conclusion, these cabinet changes, which are also contextualized by huge social protests, do not express anything other than the recolonization of Argentina, its alignment to globalist policies, this is a major conditioning factor for the possibility of the development of the BRICS including Argentina in this scheme; it is to have managed to control eventual damages in the event of a victory in Brazil of Lula and his intention to strengthen the BRICS.

It is a regrettable capitulation of a government that was elected to do exactly the opposite of what it has been doing.