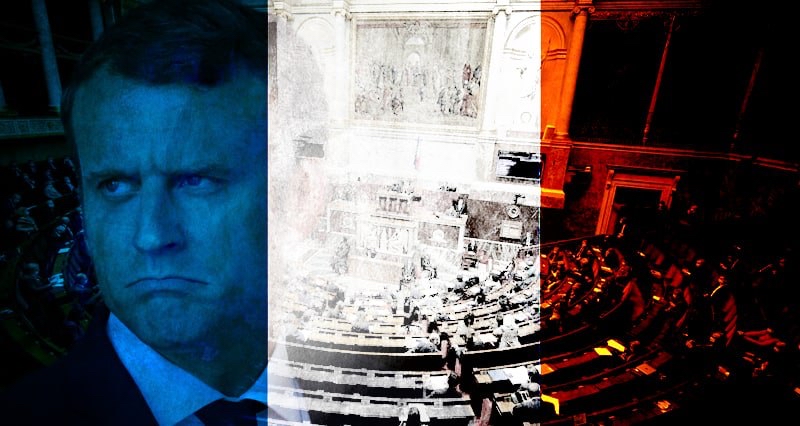 The final result of the legislative elections on June 19 belied all the assumptions made following a presidential election whose outcome was known in advance. Let us recall here that if Macron’s re-election was the result of clever political calculations, it does not represent the real will of the French population. He has succeeded in surpassing Nicolas Sarkozy and François Hollande in the detestation he inspires to his citizens.

Despite this, many observers believed that Emmanuel Macron would win the legislative elections in a repeat of his presidential strategy. However, if this strategy was roughly the same, the result was totally different. His electoral group Ensemble, which includes his party LREM and other groups, won only 245 of the 289 seats needed for a majority. For its part, the Nupes (Nouvelle Union Populaire Ecologique et Sociale), bringing together various left-wing currents, won only 131 seats, an honorable result but far from ensuring the position of strength that Jean-Luc Mélenchon had dreamed of in order to impose his appointment as Prime Minister. Above all, the results for the left-wing parties show a decline of 300,000 votes, not enough to claim victory. As for the former “big” government parties, the Socialist Party and the Republicans (conservative right), their gradual disappearance has been confirmed.

Even more than for the presidential elections, abstention was the great “winner” with a rate of 53.77%, a record to which must be added the invalid and blank ballots. It is therefore less than one citizen out of two who went to the polling station in spite of the numerous calls for mobilization. Is it necessary to recall the reasons for this growing abstention, which affects the majority of young people? A large part of the population no longer believes in the democratic process, the point of no return having been the adoption of the Lisbon Treaty by the legislative Congress after the French people rejected it in the 2005 referendum. The process of disaffection, which had already begun before, has since accelerated significantly. After all, how can elected officials really change policies that are imposed by the treaties that bind France to the EU and align her with Washington, especially when successive governments have organized the loss of France’s sovereignty and the loss of the means to ensure it?

The only genuine surprise of these elections, throwing all the clever calculations of the specialists to the ground, came from Marine le Pen’s National Rally, which succeeded in getting 89 deputies elected, whereas it had only 8 in the previous term. A result all the more significant of the impulses and anger inhabiting the French electorate that Marine le Pen has once again served as a scarecrow intended to guarantee the re-election of Emmanuel Macron.

Thus, what, in the spirit of the Fifth Republic, was supposed to be a confirmation process in favor of Emmanuel Macron in order to give him the necessary majority to govern, has turned into what could become a presidential Berezina. Already several members of the government, summoned to acquire electoral legitimacy by presenting themselves as candidates for the legislative elections, have been brutally eliminated, starting with Christophe Castaner (president of the LREM group in the National Assembly and Jean-Michel Blanquer (ex-minister of National Education already on the sidelines) but also the ministers Amélie de Montchalin, Justine Benin and Brigitte Bourguignon.

The legislative elections functioned as an anti-Macron referendum and confirmed what was latent in the presidential election, but had not been able to express itself, the French having been taken hostage by yet another recourse to the scarecrow Le Pen. By now, the following events confirmed the impossible situation in which the Executive finds itself: postponement of the Council of Ministers of June 21, refusal of the resignation presented by the Prime Minister, Elisabeth Borne – as unpopular as freshly appointed -, total immobility since his re-election. In short, a wind of panic arose in which the terms of “ungovernability” and “dissolution of the National Assembly” came back with insistence.

Above all, Emmanuel Macron’s room for maneuver is shrinking everywhere, even within his own team. Even the untouchable secretary general of the Elysée, Alexis Kohler, the only man with direct access to the President, is now being accused of having inspired him with a bad strategy for the legislative elections by recommending not to campaign and let the others express their incompetence or extremism. But as much as this strategy had worked very well for the presidential election, it was a clear failure in the legislative elections, reinforcing his image of arrogance and showing him approaching this unavoidable democratic moment with an inappropriate casualness.

Deprived of a majority, Emmanuel Macron will not be able to govern, except by rallying the Republican group and “poaching” one by one deputies from other groups, a strategy that he will of course have to pay for and that he is not even sure of succeeding, given the strong resistance.

On June 25, he asked Elisabeth Borne, the Prime Minister, to present him with the constitution of a government. This government will be the alliance of the “reasonable” that he called for in his June 22 speech, that is, excluding the LFI1 and the Rassemblement National, parties that he considers too extreme, except that they are the opposition parties that have received the most votes. As a man of division, Macron can only hope to come out of this with more division and immobility, but with the firm intention of pursuing his program to reform the pension system and what remains of the French social system, whatever the cost… Above all, once he has succeeded in “cobbling together” a majority, he will try to get out of it by wearing down the oppositions in such a way as to discredit them in the eyes of public opinion and propose the dissolution of parliament at that moment. This power to dissolve the Parliament is the main weapon of the presidency given by the French Constitution.

In 1946, General de Gaulle resigned (as he did in 1969 for similar reasons) after losing the legislative elections, because he felt he no longer had the support of the population necessary for his action. France was then under the 4th Republic, which was characterized by a parliamentary system that was harmful to the country. When de Gaulle came back to power in 1958, he had a new Constitution adopted which inaugurated the 5th Republic with the objective of putting an end to this deadly parliamentarianism which saw coalitions as unstable as they were ephemeral. The Constitution of the Fifth Republic explicitly sought to establish a power based on a strong majority and not allowing this game of coalitions.

Yet this is what France is moving towards, and it is with this new parliamentarianism that Emmanuel Macron hopes to keep power by placing himself above the divisions that he will take care to feed. Beyond the ignominy of such an approach, it is a risky gamble, since the French have already realized that he would only be able to remain in power at the price of sordid arrangements. It is widely analyzed as a return to the habits of the 4th Republic but now under a theoretically powerful presidency, an obvious contradiction leading to domestic instability within a perilous international situation.

Delegitimized in France, where he is the target of booing whenever he travels to public events, Emmanuel Macron is also delegitimized abroad, including within the European Union, which he imagined would be a springboard for him to shape history. Here again, increasingly open criticism has been leveled at the man and his way of governing. Human rights associations had already denounced the brutality of police repression against the Yellow Vests. More recently, the scandal of the Champions League at the Stade de France, in which the Minister of the Interior, Gérald Darmanin, blamed the English fans, against all evidence, for the violence that marred this sporting event, exposed to the whole world the incredible bad faith of a minister that Macron has never stopped supporting.

What is left for Emmanuel Macron in this situation and can we expect anything positive from him? His recent statements about not “humiliating Russia” had given hope that he would try to be a force of “reason” in the madness that has gripped Western governments in the conflict between Russia and Ukraine, but his visit to Kiev and his new statements that Ukraine should win the war, regain the lost territories, including Crimea, show a man unable to defend his own principles, not to mention that these words, associated with the delivery of weapons to Ukraine, only add fuel to the fire, unnecessarily prolong a war and increase the risk of slipping into a conflict encompassing the whole of Europe, if not the whole world.

So, has the post-Macron era already begun? Although one is tempted to answer in the affirmative, it is clear that a France under a second Macron mandate can only head towards a period of strong instability, whereas it has precisely the vocation to be this element of balance so necessary today in the face of an extremely serious international crisis. The post-Macron era will only really begin when France will be able to regain its independence and its freedom of speech. It means that the more of two thirds of the French that either abstained or voted for negative reasons find a genuine representative beyond what Charles de Gaulle called “le régime des partis” – the regime of sterile oppositions for opportunistic reasons.