Willian Rodríguez: “New petroleum law is in the making” 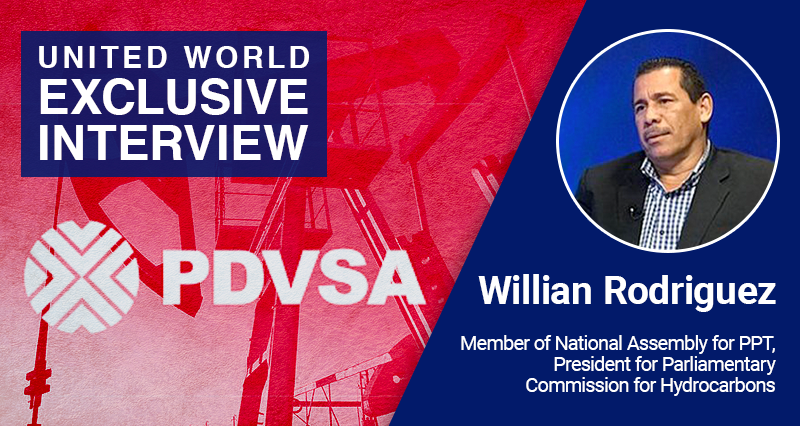 “Our current production is oscillating between 800,000 and 900,000 barrels per day. In December 2021 we reached a production peak of one million 40 thousand barrels”, confirms Deputy Willian Rodríguez, President of the Hydrocarbons Sub-Commission of the National Assembly of Venezuela.

Rodríguez assigns to the workforce of the industry decisive achievements in this goal, the product of extraordinary efforts that have made it possible to solve a large part of the technical and engineering problems.

“We have done truly innovative things: we converted two upgraders at the Jose Chemical Complex (Anzoátegui) into two intermediate refineries,” he reveals.

“That is what allows us today to have gasoline and diesel, because the sanctions have done us a lot of damage and we have made mistakes concerning the development plan of PDVSA: we abandoned our traditional fields and today we have our refineries running thanks to the efforts of President Nicolás Maduro, to the new board of directors, to the Alí Rodríguez Araque commission, of which I am a member as an advisor… But we do not have the crude, because our refineries were designed by the North Americans for medium crude and light crude”, regrets the parliamentarian who heads one of the factions, the Homeland for All (Patria Para Todos).

Rodríguez imposes that to meet the goal of two million barrels per day it is necessary to return to Lake Maracaibo. “It is our natural basin for light crude, and we must return to the north of Monagas with great force.”

He explains that of the 522 measures that constitute the US blockade against Venezuela, 90% were designed to prevent PDVSA from accessing international banks to obtain resources.

“The exploration part needs a lot of investment.”

He says that it also depends on the circumstances produced by the war in Ukraine.

“Obviously, when the United States decides to swallow thick and ignore the sanctions that it has imposed on Venezuela for more than five years, it is clear that for them the war in Ukraine is going to be long-winded. It is not a short war that is going to end in 90 days”.

And that is why they look at Venezuela, says Rodríguez.

“Not so much for crude, because they are only buying from Russia 170,000 barrels a day, which is something that we could be supplying in 60 or 90 days, if the sanctions are lifted.”

“The problem is that they buy 20% of their gasoline from Russia. The United States, which has not built a refinery for more than 35 years, has a deficit in its refining capacity to serve its own internal market.”

“And the only country that has the infrastructure to supply that in a peremptory way is PDVSA, that is, we he Venezuelans.”

“And they have only two options: either they lift the sanctions in a general way, allowing PDVSA to mobilize all its engineering capacity and all its technical capacity to quickly increase to two million barrels per day, or they extend the licenses to North American companies. like Chevron, which has a license that only allows it to operate to maintain its infrastructure in Venezuela.”

A reform of the Law is being considered in the Hydrocarbons Sub Commission?

“No, we are going to make a new Hydrocarbons Law. We started a consultation process last year that is still open and we are about to open a web portal so that people can send, but we have already received important proposals. The workers, through the Jesús Rivero Labor University, submitted a proposal. We understand that the people of PDVSA have a proposal; the Oil Chamber, which brings together private companies that provide services to the Venezuelan oil industry, has submitted a proposal and many personalities and institutions have also made proposals.”

In what direction is this new law directed? What is the core? Is it going to allow the private company to have more market share, that is, to be able to sell?

“With respect to that, I want to say that there are several myths. Everyone is saying that international companies are not coming to Venezuela because they want a greater shareholding, that they want to have the majority of the shares… Our current Hydrocarbons Law prohibits that, although the Anti-Blockade Law approved by the National Assembly allows the Executive to make any type of agreement, even over the restrictions that the Hydrocarbons Law has.

However, I want to say responsibly: today no company, that is in any of the 42 associations that PDVSA has in mixed companies, has made an approach to say that they want a greater shareholding.”

In fact, the parliamentarian admits that a large part of the achievement of raising production to almost one million barrels and of tuning the refining apparatus is the product of the participation of private companies.

“It is impossible to solve that without this productive chain”

But he insists: “There is no transnational demand to have a greater shareholding than Petróleos de Venezuela.”

Willian Rodríguez asserts that the consolidation of the new Hydrocarbons Law awaits the National Executive, which must say what it wants to change, because it considers that there is a part that is key: the tax area, that of taxes and royalties, of the majority shareholding.

“Until now the Executive has not said anything in relation to that.”

Rodríguez believes that the Law under construction has to contemplate the new social organizations that are participating in the oil activity. “For example, the productive councils of the workers. We are convinced that the Law must have a chapter that gives strength to that organization, which is what has allowed us to build the oil industry”.

“And an element that for me is crucial: that the Law reflects the new vision of energy development that we have in the country, because the energy matrix in the world is changing and we have to anticipate what our development and vision may be in the coming years, in 40 and 50 years. Those are the things that could be in the Law.”

Open a well: between 4 and 8 million Dollars

What is needed once the United States decides to lift sanctions?

Essentially financing, because no one increases production if they don’t contract again an important park of drills and the operation of drills in the world is expensive.

Opening a well in Venezuela costs between 4 and 8 million dollars, so many resources are needed to double your production, although there are parts where we can increase production rapidly, for example, in Lake Maracaibo.

We need to make a bold plan there to accommodate our gas injection stations, repair our pumping systems, improve that network of pipes that is in the Lake and make a real effort to incorporate the private company for that operation that is complex.

Rodríguez maintains that the joint ventures (subject to a very flexible law, he says) are the ones that are mainly pressuring Biden to say: well, until when do we stay out of the Venezuelan oil business, which is an operationally safe business.

“Our production, from a cost point of view, is one of the lowest in the continent.”

What is the current situation of the Orinoco Belt?

During a decade of the oil boom we put a lot of resources there and much of the difficulty has to do with that, because we abandoned our traditional fields, we abandoned exploration in our traditional fields and today, we have a large map of crude oil in the Orinoco Oil Belt, but our refineries do not refine that crude, that is why we have this difficulty right now: we do not have enough crude to put our refineries into operation at 80, 90, 100%.

Regarding PDVSA, he affirms that it has to redesign a marketing strategy that is much more daring than the one it has now.

First because the sanctions on Russian oil force Russia to look at our main buyers: India and China. And in the competition for that market, Russia has advantages: it is much closer than us.

The effort that PDVSA has to make must be aimed at obtaining new markets and new clients that are capable of facing the sanctions and the blockade.

What is the future of gasoline consumption in the country?

In our case, as a fraction of the rebellion of the PPT bases, as long as we do not dignify the salary of our workers, we are going to oppose the elimination of the gasoline subsidy. In this country, which is an oil country, we Venezuelans have the right to get subsidized gasoline.