“We can produce a million of barrels per day more” 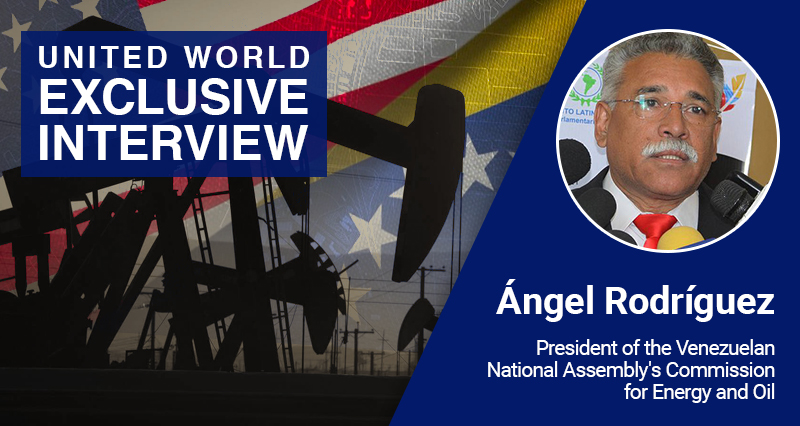 (Photos by Pedro Solano, translation and editing by Yunus Soner)

“We can produce 1 million barrels per day more by the end of the year, and even sooner, if the US lifts sanctions. With major investment in petrochemicals on the way, Venezuela can turn into the energy locomotive of Latin America,” says Ángel Rodríguez.

With the economic recovery after the pandemic and the sanctions on Russia, global energy supplies and prices have gained attention. Eyes have turned, among other countries, to Venezuela. Even more o, after a US delegation made an official visit to Caracas in March after 2 years of not recognizing the Maduro government.

Ángel Rodríguez is a member of the National Assembly of the Bolivarian Republic of Venezuela and President of the parliament’s Commission on Energy and Oil.

His commission is responsible for the auditions, inspection and supervision of the oil sector, gas industry, mining sector and the energy in general.

Rodríguez has been part of the Bolivarian Revolution since its earliest days and has served as Energy Minister under the presidency of Hugo Chávez. But his most striking historical merit is to have introduced current President Nicolás Maduro to Chávez. The latter was imprisoned after his first insurgency in 1992 in the Yare Prison. One day, when Chávez and Rodríguez met, the Commandante asked his compañero to introduce to him a worker who also was a social leader. And there was Nicolás Maduro.

We interviewed Angel Rodríguez in his office in the National Assembly in Caracas.

How do you see the global energy situation in the context of the Ukrainian conflict?

The conflict has huge repercussions. Today, the price of a barrel of oil has risen to 104 dollars in the international market. This has consequences for all oil derivate products: diesel, gasoline etc. And it has consequences for petrochemical products as well. Increasing oil prices will lead to increasing food prices.

In addition, Russia is an important producer of wheat. There are already reports of bread scarcity in Italy. Europe imports 40% of its energy from Russia, some countries even up 60 %. This creates a very precarious situation for broad masses in Europe. The longer the conflict endures, the worse the consequences will be. The current rise in the oil and food prices in unprecedented.

Moreover, Russia is also an important producer of fertilizers and petrochemical products, which also face price increases. Latin America is already feeling the effects, beginning with Brazil, which imports all its fertilizer consumption from Russia.

In that context, it is also noteworthy that the US, which is importing approximately 25% of its gasoline from Russia, has demanded Saudi Arabia and Qatar to jump in – but they rejected.

How do you see the OPEC’s position?

First of all, oil-producing countries will of course benefit from the price increase. The OPEC and OPEC + have production agreements, and they systematically stick to them. They are providing an additional 413 thousand bpd (barrels per day) to the market.

OPEC has been and is also today focused on ensuring market equilibrium. The prices shall not be too high nor too low, to protect both consumers as well as producers of oil.

Where is Venezuela standing in this context?

To begin with, we have the biggest oil reserves in the world. International organizations have examined, confirmed and certified reserves of 323 billion barrel. And there is more in the process of certification.

(According to OPEC data, this makes up one fourth of all global reserves. Second comes Saudi Arabia with 267 billion and third Iran with 155 billion barrels, DB.)

There is the concept of recoverable factor of oil. This refers to certain additional measures such as pumping water and steam to the oil well to maximize extraction. Applying that factor, our reserves could reach up to 600 billion barrels.

This is the reason why the United States has pressured us. That we are a steady, reliable supplier of oil was not enough for them. They wanted to usurp the world’s biggest oil reserves in our country. That is why they organized the coup against Commandante Chávez, why they pursued economic sabotage and imposed a criminal blockade against our country, including robbing our oil tankers on the high seas. They wanted to cause a social explosion in Venezuela and establish a government subordinate to them.

But in spite of all their measure we have reached a production of 1 million 43 thousand bpd with the help of Russia, China, India and Iran. And the goal, announced by our president, to produce 1 million bpd more is possible. We can reach that goal by our own means by the end of the year.

“Optimistic” about an acceptable US proposal

There has been a delegation from the US visiting Venezuela in March and reports indicate talks about a restoration of relations. How do you see these steps from Washington?

In the current meetings and talks, the US has to present a proposal to Venezuela that we can agree on.

Are you optimistic that could happen?

Yes, I am optimistic because of the energy needs of the US. Look, they are currently even selling their strategic reserves to lower the oil and gasoline prices.

And on our side, we now more experience in procurement for refineries, in technology and know how to extract more from the Orinoco Belt. There is already decisive amount of private investment that will help to produce the necessary oil amount.

And as for the talks with the US: We can produce up to 1.8 million bpd in the third trimester if they fulfill our conditions: They have to end the sanctions and blockade, liberate our illegally frozen financial resources. If Latin American and transnational companies, which have been active in Venezuela before, come back and if the limitations imposed on us concerning procurement of chemicals, technology and finance are lifted, we can realize that amount of oil production.

“No discrepancy with Russia”

Venezuela is allied with the Russian Federation. Would such an increase of oil production not affect your relations?

There will be no discrepancy between Venezuela and Russia, because Russia continues to deliver energy to Europe despite the fact the European countries side with Ukraine and deliver even weapons to that country. Weapons that are used by fascist forces there to kill innocent people.

How is the situation in the Orinoco Belt, which is considered to have huge undiscovered oil reserves as well?

As for the Orinoco Belt, there are already investors that guarantee a production of 400 thousand bpd within 1 to 1 and half years.

Look, as Venezuela, we have never wanted to be the enemy of the United States or even much less, its people. Both President Chávez as well as President Maduro have, in their speeches, in the dialogue with the Venezuelan opposition and in international forums always emphasized this position. We always desired a relation based on mutual respect.

Back then, Commandante Chávez had made a gift to President Obama: the book “Open veins of Latin America” by Eduardo Galeano. I think this tells a lot about our position. If the United States abandons the sanctions and blockades, our capacities will multiply.

Petrochemicals are also affected by the Ukraine crisis. How is Venezuela’s situation concerning these?

There are already international agreements in preparation that will allow the construction of up to 10 petrochemical factories within 2 or 3 years. These factories will produce a sum of 203 different products, including the aspirin that you take! These projects are already included into the general development plan for our country.

Besides that, we will inaugurate 3 plants for the production of urea and other fertilizing chemicals in this year. This will help us, if we can agree on the terms, to help and support other countries in need of such products in Latin America. Venezuela will become a major actor of support for Latin American countries in terms of petrochemical products.

Brazil is an immense market for fertilizers. Can there be an agreement on that product with Brazil?

We are already in contact with Brazilian authorities concerning fertilizers. But the fact is that the Bolsonaro government there does not recognize our president as the legitimate government. We will see how that resolves.

“Venezuela can become the energy locomotive of Latin America”

Besides, they are heading to elections in Brazil, which Lula most probably will win. So we will see how these negotiations continue and evolve.

You also have to remember that the US has caused a huge crisis in fertilizer production, when they robbed our company CITGO. CITGO was producing fertilizers for both Venezuela and Colombia. Here we are again at the issue of US sanctions against Venezuela.

If Venezuela increases oil and petrochemicals production, what is the regional consequence?

Venezuela can become the energy locomotive of Latin America and the Caribbean. We have always bet on solidarity and complementarity in the continent.

And with the CELAC and ALBA, the necessary institutional framework is already given today. And with have good relations with the progressive leaders in Latin America. Venezuela is in conditions to play that role.

“Conflict in Eurasia has accelerated the emergence of a different world”

And how do you see the world’s future in the context of the Ukraine conflict?

I think that the conflict may wind down as far as the military dimension is concerned. But the measures put in place against Russia will probably continue, create more confrontation and keep on increasing the price for oil, fertilizers and food.

We on our side have to keep on pressuring for peace and for minimizing the negative impact on the people, which ultimately pay the price.

And we have to unite under the banner of multilateralism and multipolarity, because new powers have emerged. The conflict in Ukraine has shown us that the world is not submitted to the United States. There is Russia that says, “Here I am”. There is China, there is India, there are other countries and a multipolar world is emerging.

The conflict in Eurasia has perhaps accelerated the emergence of a different world with various powers. This is a new order. The US believes it can organize and dominate it. But what I see is: this new order cannot exclude anybody.