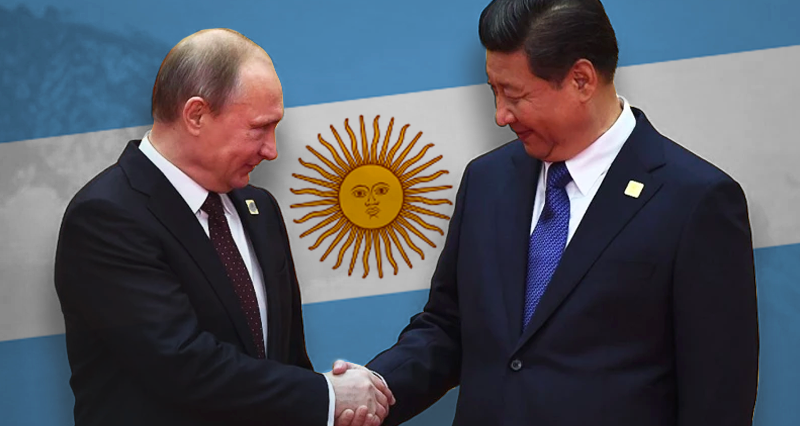 A summit held between Russian Premier Vladimir Putin and Chinese leader Xi Jinping is an unappealable response to the desperate attempt to recover hegemony by the Biden-Harris regime and Global Britain, an effort toward their diplomatic, military, commercial and financial redeployment.

Entire paragraphs of the document signed by both leaders are intended to respond to the anodyne Summit for Democracy that the US president tried to articulate, and to the G7, which expressed concern about the Russian military concentration on the borders with Ukraine.

The document will reject the idea of ​​the United States as a global gendarme, also removing its favorite argument to sanction rogue governments, thus firmly establishing that “a nation can choose the forms and methods of implementing democracy that best suit its state particular, depending on its social and political system, its historical background, traditions and unique cultural characteristics. It is solely up to the people of the country to decide whether their state is democratic.” They set specific limits in a section that will be titled “Democracy and human rights should not be used to pressure other countries.”

The document clearly expresses the crystallization of a New Global Geopolitical Era in which they seek to limit the devastating US hegemonic policy that overwhelms the possibility of realization of the states for the sake of their own interests. It is a forceful document against Atlanticist imperialism and specifically against North American imperialism, also announcing the will to contribute to building a world with global sustainable development and a community of common destiny for humanity.

The text expresses firmness regarding what they understand as attacks by Atlanticist imperialism against their security and against world peace. They unequivocally point out the dangers of North American biological weapons; they state the risks of militaristic nuclear proliferation adventures expressed in the AUKUS agreement with a caveat: they are clear in declaring themselves allies in all fields in the face of possible attacks and warn about global security measures to check Biden’s cavealear adventure. All of this comes in the midst of the Anglo-American provocation in Ukraine.

This is a pristine warning to NATO about its expansionism and the policy of militarily “ringing” the borders of both countries. That is why they remember their fixed place in the UN Security Council in a gesture that seems to warn about intolerance to future adventures of unilateralism.

They affirm the post-war status quo, and are encouraged to reaffirm that, in their opinion, there are no prohibited areas of cooperation, since there is no planned cooperation against third countries.

At the summit between the two presidents, Xi Jimping noted that China-Russia relations have passed tests and “shown vitality.” “The two countries support each other on issues of key interest, have shared interests and act as cornerstones of true multipolarism.”

The articulation between the Eurasian Union and the BRI project, (China’s ‘Belt and Road’ initiative) stating that they also propose to incorporate India, claim APEC, ASEAN, which heralds the consolidation of an economic, financial, commercial and defense that unbalances capitalism as we know it today. This consolidation can serve as the foundation of multipolarism.

They addressed practically all points where the United States tries to block or neutralize the advances of China or Russia, including the issue of international information security, on which the parties believe that the Global Initiative on Data Security, proposed by China, It is a proposal that democratizes and resolves inequalities on this sensitive issue.

In conclusion, the time has come for the strategic alliance that began to be amassed in the first meetings of the so-called Club of the Five and advanced with the Shanghai Cooperation Association to reach its highest point of total alliance between both countries, an open challenge to the ferocious expansionism of ailing Anglo-American imperialism.

Rarely has a strategic alliance had the opportunity to express itself in terms of objectives, agenda, concerns, etc. as in this document signed by both leaders.

The impact of the document in Latin America

For Latin America, the consolidation of multipolarity results in an unprecedented historical opportunity for its own fulfillment and self-determination. This circumstance also occurs at a time of a neo-Monroe doctrine offensive in the region, what we call imperialist redeployment. For this reason, although presented with a remarkable historical opportunity, it is also true that Russia and China are pondering the post-war status quo: they want their zones of influence to be respected, just as they want to respect what is characteristic of other powers. This of course is absolutely dynamic.

NATO’s threats to Ukraine have already triggered a major Russian offensive on Latin American countries beginning with communications with Ortega or Maduro, and followed up with the reception of Fernández and a visit by Bolsonaro.

Cuba, Nicaragua and Venezuela, as the Latin countries that suffer the greatest attacks from North American interference, have direct Russian investments, many of them in the form of military cooperation.

The fabulous Chinese economy does the same in other countries whose political destinies are marked by a debate between self-determination or being permeable to neocolonialism.

The political future of President Castillo in Peru is tied to the possibility of the consolidation of Chinese investments in the country, which is already very present in the powerful mining sector, and which has been growing since the purchase in the 1990s of Hierros Perú from part of Shougang, and continued with the opening of a plant in the Andean country of Chinalco, aluminio.

The same is true of Mexico, with about 400 million dollars of Chinese direct investment. In this case, there has been a certain slowdown due to the tax complex that need to be resolved.

In the Chilean case, two of the largest electricity distribution companies are controlled by China. Since the FTA between Chile and China came into force in 2019, its modernization protocol was published to accelerate investments. According to data from the Undersecretariat for International Economic Relations (Subrei), between January and June, Chilean exports to China totaled a value of 45,377 million dollars and imports a total of 40,017 million dollars. The presence of China is seen in banks, electricity generation companies, mining companies and others that add investments for more than 11,261 million dollars.

Colombia is another country where China has deepened its investment policy fundamentally during the pandemic.

And this is all without mentioning the apparent reactivation of the engineering mega-work that opens a new commercial universe such as the projected bi-oceanic canal in Nicaragua.

China is shaping up to be the main trading partner of Latin America and the Caribbean, above the United States, according to the World Economic Forum (WEF), in less than 15 years.

In addition to this document, which is clearly a reaffirmation of the path that half of the world has taken, the possibility of a military confrontation with Atlanticism shows the possibility of sanctions, restrictions and blockades that will try to curtail this initiative of the Sino-Russian axis; but that is something for history to determine.