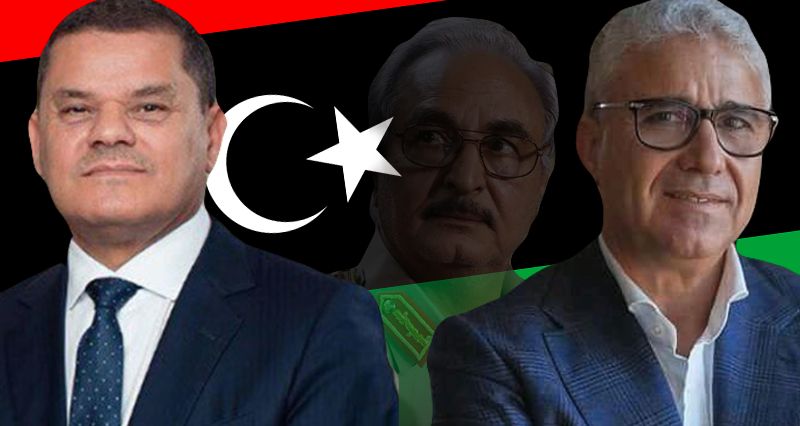 With eastern and western Libya now having elected different prime ministers, the potential for the reignition of a regional conflict has increased. However, even within these regions, internal conflicts are rife, all of which have implications in the international arena.

When elections could not be held on December 24, a new political crisis erupted in Libya. The country now has two prime ministers. In the west of the country, the Prime Minister is Abdul Hamid Dbeibeh of the Government of National Unity (GNU). Fathi Bashagha, prime minister elected by the House of Representatives, claims that Dbeibeh’s term of office ended on December 24.

Five people put their name forward in the election, two of which, including Bashagha, have been approved for candidacy. Before voting, the speaker announced that one candidate had withdrawn from the race. Thus, the House went to the election with a single candidate. Most of the deputies from the western part of the country did not attend the election. The House session was broadcasted as promised, but it was interrupted for a few minutes just as the voting process was taking place. As the broadcast continued, it was declared that Bashagha was elected prime minister by “an overwhelming majority”.

On the other hand, al-Bibas, whose candidacy was approved, claimed that he was manipulatively pushed out of the race in a video message he published on social media. Al-Bibas claimed that he presented the necessary documents to the HoR and that his candidacy was approved, adding “I hadn’t withdrawn from the race. Aguila Saleh lied about my withdrawal in order to leave me out.” This led to the questioning of the reliability of an election which was already of questionable legitimacy.

The situation is similiar to what happened around a controversial election law that was sent to the United Nations (UN) without having been voted for in the House. Khalifa Haftar was the first to react after Bashagha was declared prime minister, stating he was glad to hear his “old enemy” had been elected prime minister. Just two years ago, Haftar’s troops fought against the Government of National Accord (GNA) of which Bashagha was the Minister of Interior. Haftar’s siege on Tripoli was only halted by Turkey’s military support, and then a counter-attack commenced. GNA troops, supported by the Turkish Armed Forces, chased Haftar’s militia all the way back to the Sirte-Kufra line but the counter-attack was halted by the Wagner troops stationed there. This process started a de facto ceasefire and the UN talks accelerated accordingly.

How did we get here?

In the 2020 meetings of the Libyan Political Dialogue Forum, led by the UN, it was decided that the presidential and parliamentary elections were to be held on December 24, 2021. However, parties, namely the HoR and the High Council of State (HCS), could not agree on legislation regarding the legal infrastructure of the elections. The main reason for the disagreement was that the HoR wanted to eliminate any legal barriers preventing Haftar, a US citizen, from becoming the president; a man who had been declared a war criminal by the authorities in Tripoli. As the negotiations ended unsuccessfully, Aguila Saleh hastily and unilaterally sent the legislation to the UN, without a vote in the House. It was impossible to hold an election with a law that Tripoli refused to recognise and to no one’s surprise, the elections did not take place. Today the HoR justifies its election of a prime minister by referring to these unheld elections. Yet, the HoR had already declared that they had withdrawn their vote of confidence on the GNU.

“Forcing their way into Tripoli”

Bashagha, who endorsed the same list of candidates as Aguila Saleh during the 2020 interim elections, has now completed his process of switching “sides” with this declaration of the new prime minister. With this new step by the Haftar-Aguila Saleh duo, aimed at cracking the Western-centric bloc, a new era has begun with two different prime ministers who do not recognize one another’s authority.

Abdul Hamid Dbeihbeh, the former prime minister who held office before the HoR elected a new one, has declared that “he would only allow a transition of power to an elected government.” After Basagha was declared prime minister, Dbeibeh, in a statement to al-Ahrar, called the act “a forcible entry to Tripoli” and added, “I reject Libyans being dragged into yet another war. The people of Tripoli shall defend themselves.” In a statement the next day, he also commented on the electoral process: “We have prepared a plan with the motto ‘What people entrusted to us, shall be returned’ for elections to be held. We shall announce the details of the plan on February 17, the anniversary of the revolution.”

With all this happening, the High Council of State (HCS) assumed a confusing stance. Khalid al-Mishri, known for his close ties to Dbeibeh, or more accurately, to the GNU, described the election of Bashagha as the result of “a rare occasion of agreement between the House and the HCS” and accused the Dbeibeh government “of supporting a campaign against the House and the HCS.” Looking al-Mishri’s statements, one would assume that they would recognise Bashagha as the prime minister, yet, al-Mishri left room for political maneuvering, saying: “They haven’t adopted a final stance on the election of a new prime minister and they may approve objections to it on the next session of the Council.”

“It is not a healthy practice for the HoR to appoint a new prime minister for the government prior to an official session of the HSC,” al-Mishri said in a statement on February 16.

It seems that al-Mishri, although leaning towards HoR and Bashagha, is still refraining from adopting a definite attitude to avoid any reaction.

If HCS maintains its favorable attitude towards the HoR, it could mark the beginning of turbulent times for Dbeibeh in particular, and for the government in the West in general. This would mean that Dbeibeh, unsupported by the HoR and deprived of all legislative support, may not remain as Prime Minister for long.

Alarm bells for the army

Such a development may amount to a catastrophe for the army in Tripoli and the Western policy that depends on it: the resumption of conflict amongst the troops in the West who had been united against Haftar.

The situation revolving around the Misrata Brigades, the elite troops of the Tripoli army, is also important. It was known that the Misrata Brigades, who had achieved significant success in the struggle against Haftar, had close ties to Bashagha when he was the Minister of Interior. Indeed, this is the source of Bashagha’s political power. It is hard to say that all troops in the Mistrata support Bashagha, but it seems he enjoys a great degree of support. After his appointment as the prime minister, Bashagha stated that “they have contacted the army and the security forces and they have received positive reactions.” However, Dbeibeh is also a Misratian politician and it seems some troops in Misrata are reacting against Bashagha switching to the side of the “enemy”. 21 brigades in Misrata made a joint statement in which they described the House session during which Bashagha was elected prime minister as “comedy.” It was also emphasized that “it is unacceptable for the HoR to take individual decisions on constitutional and political processes.” Following the statement, around 200 heavily armed military vehicles left the city and arrived in Tripoli.

Support for the West, greenlight for the East

Meanwhile, President Recep Tayyip Erdoğan made the only statement on the issue from Turkey. Turkey has a significant impact on West Libya but also has been trying to improve its relations with the East. Erdoğan stated that the initiatives against Dbeibeh are upsetting and it would be better for elections to be held instead of installing another interim government. Erdoğan also underlined his positive relations with Basagha and al-Mishri: “We have a good relationship with Fathi Bashagha as we do have with Dbeibeh. We have a good relationship with Khalid al-Mishri as well. The whole issue is how will the Libyan people decide and in favor of whom.”

Considering Erdoğan’s statements, it seems that Turkey is leaning towards Dbeibeh, but it also wants to avoid tensions with the HoR or the political actors who have close ties to it.

In the meantime, Bashagha has 15 days to form a new government after being declared prime minister. He is expected to announce the new government by February 25. Bashagha says he is in contact with various parties, including non-governmental organizations: “I have started the discussions with the Hoıse of Representatives, the High Council of State, and the Chairman and the Vice-Chairman of the Presidential Council.”

“We believe he will allow a peaceful transfer of power,” said Bashagha about Dbeibeh, but Dbeibeh has not stepped back.

The most realistic solution is a consensus without Haftar

After a relatively stable and more or less conflict-free year and a half, the situation in Libya is the same as before. This has been caused not only by ambitious Libyan politicians but also by the intervening countries and especially the UN. Just as the whole world, and especially Russia, is occupied by the crisis in Ukraine, all these developments in the field may prove to be costly in the future. Is there a way to prevent such an outcome, which would ultimately benefit neither the East nor the West?

Undoubtedly, no one can say “yes” for sure, but there may be a common solution to reconcile East and West, as well as Turkey and Russia. However, this solution would require that Haftar, whose position is becoming increasingly weaker and who lost much of his reputation because of the war crimes he committed, must be taken out of the equation. The main responsibility falls on the politicians in East Libya, especially Aguila Saleh, and Russia, which has influence in the East.

Thanks to an initiative by Turkey and Russia, the countries in the region and then the UN may be prevented from giving Haftar political agency. It is known that Russia and the United Arab Emirates (UAE), once having given Haftar the encouragement to attack Tripoli, have now withdrawn their support. Russia gave up on Haftar when he abandoned ceasefire talks in Moscow in June 2020. It is also known that the UAE, which has recently been changing its direction in foreign policy, is now pursuing closer ties with Turkey and the Dbeibeh government. It is no secret that Egypt, in search of alternative power to Haftar, is in contact with Saif al-Islam Gaddafi. Given these options, it is now much more realistic to leave Haftar out of the equation. If Haftar is not a political option, a political solution to the crisis can be found.