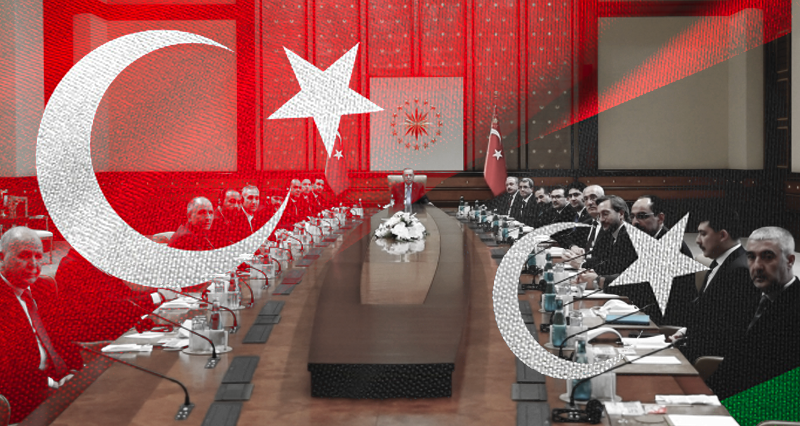 This is how the Turkish pro-government newspaper Yeni Şafak announced the recent diplomatic effort of the Turkish government. While presidential elections, scheduled for December 24, are getting closer in Libya, Turkey has made an important diplomatic opening.

A delegation representing the House of Representatives (HoR), from Libya’s eastern parts, is paying Ankara an official 3-day visit. The Libyan delegation is chaired by Fawzi al-Nuwari, the Deputy Chairman of the HoR.  The visit takes place on invitation by the Turkish-Libyan Parliamentary Friendship Group.

During the visit, President Erdoğan also welcomed al-Nuwari, as the Presidential Communications Department has announced.

The delegation, which is mostly comprised of parliamentarians from the east of Libya, also met with the Chairman of the Turkish National Assembly, Mustafa Şentop.

Until now, Turkey had only recognized the Government of National Unity in Tripoli, while maintaining distance to the HoR, which is considered an ally of General Haftar. The Turkish government repeatedly had accused Haftar of committing crimes against humanity in Libya and of attempting a coup against the legitimate government.

Yeni Şafak reports that the Libyan delegation brought the message to Turkey to “open a new page concerning the east of the country, divided by Hafter’s attacks, and widen the existing Turkish-Libyan cooperation concerning peace, stability and investment into the east of Libya”.

The Libyan delegation invited Turkish businesspeople to return to Benghazi. Al-Nuwari stated we want Turkey to attach greater attention to Libya’s east. The re-opening of the Turkish embassy in Benghazi would constitute an important step reflecting intentions.”

The Turkish side convened to the Libyan delegation its expectations concerning security and technical preparations for the re-opening of the embassy and the re-start of direct flight to Benghazi by Turkish Airlines.

Turkey had closed its embassy in Benghazi in 2014, when the clashes during the civil war had flared up.

The Turkish Chairman of the Turkish-Libyan Parliamentary group of Friendship, Ahmet Yıldız commented on the visit the following: “If necessary, we will continue to defend Libya. We are willing to develop good relations with all of territories in Libya. Concerning the upcoming elections, our expectation is that there is no use of weapons again. We are currently incentivizing companies, but if weapons are used again, than the entire companies stop”.