Turkey and Russia must agree to keep Libya safe 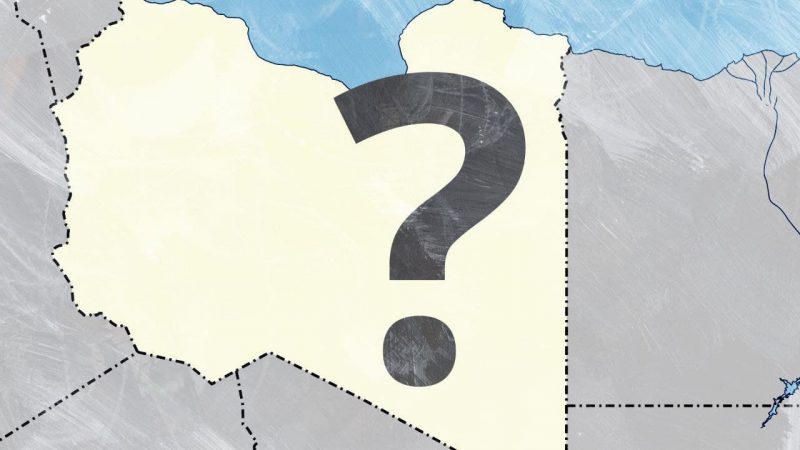 The political process in Libya is once again poised to fail. On Monday, the country’s parliament (House of Representatives – HoR), sitting in the eastern part of the country, passed a law that postponed parliamentary elections by a month.

“The election for members of the House of Representatives will take place 30 days after the presidential vote,” parliamentary spokesman Abdullah Bliheg told a news conference. The law has already been condemned by parties in the western part of the country, as it restricts party rights.

Libya’s presidential elections are due to take place as early as December 24. But it is not yet clear under which rules they will take place. The High Council of State, the legislative body, which meets in the western part of the country, on Tuesday 5 October, rejected the electoral law passed by the parliament which meets in the east.

Back in September, the House of Representatives had passed a no-confidence vote, targeting the unity government of Abdul Hamid Dbeibah (Government of National Unity). The High Council of State rejected the law on presidential elections, back then passed by parliament. The reason for the conflict is simple: political and military factions in western Libya oppose the participation of General Khalifa Haftar in the presidential election, in whose hands most of the real power in the east of the country is concentrated. Legislation passed by the parliament, located in the east, allows Haftar to run. The positions are irreconcilable. The outcome of the conflict could be that elections in different parts of Libya will follow different rules and will not be recognized by either side of the conflict.

Most likely, new elections in Libya will not lead to a de facto unification of the country. Whoever wins, the losers will have an excuse to contest the results. In fact, power will remain in the hands of two centers: a coalition of military and political factions in Tripoli, and General Haftar in Benghazi and Tobruk.

Libya has been in a state of civil war since 2011, following the NATO invasion and the overthrow of Muammar Gaddafi. Two main military and political forces have emerged in recent years: in the east, General Khalifa Haftar and his Libyan National Army; in the west, the Tripoli and the Misrata factions, backed by internationally recognized Libyan governments. Haftar legitimizes himself through the support of the House of Representatives, a democratically elected parliament, whose deputies are mostly from the Haftar-controlled east.

For several years Libya has remained divided into east and west, consistent with the historic division into Tripolitania and Cyrenaica. Libya’s third historical province, Fezzan, has not formed a separate center of power.

The government in eastern Libya is backed by France, the UAE, Egypt and Saudi Arabia. The western region, with Tripoli as its capital and a UN-recognized government, is backed by Turkey. Tripoli has good relations with Qatar and Italy.

Russia and the US are trying to establish relations with all centers of power in Libya. At the same time, Russia is accused of giving more support to Haftar, in whom Moscow sees as a bulwark against the threat of Islamic extremism.

The US is trying to enter Libya

The US, France, Italy and the Persian Gulf countries are trying to play on the contradictions between the Libyan centers of power. The US is playing the most dangerous game. In fact, it was the Americans, represented by former Chargé d’Affaires in Libya, Stephanie Williams, who were behind the establishment of the current Government of National Unity. The US effectively used the UN mechanism to its advantage when it held The Libyan Political Dialogue Forum (LPDF) on terms put forward by Stephanie Williams.

In the end of September, Abdul Hamid Dbeibah, the Prime Minister of the Government of National Unity met with AFRICOM commander General Stephen Townsend. They discussed mounting tensions in Libya ahead of the December 2021 elections, the means to enhance security in the country and ensure the electoral process with the help from AFRICOM units. The US has a particular interest in Libya, seeking to unite the country under its auspices.

What is the aim of the US? To knock Russia and Turkey out of Libya. It is the U.S., along with France and Italy, who have been pushing for the withdrawal of Turkish and Russian military personnel from Libya.

As early as 2021, the U.S. deputy ambassador to the U.N., Richard Mills called “Turkey and Russia to immediately initiate the withdrawal of their forces from the country and the removal of foreign mercenaries and military proxies that they have recruited, financed, deployed and supported in Libya”.

Turkey became a key actor in western Libya after helping to repel General Haftar’s offensive on Tripoli in 2020. Russia has become a key actor, without which General Haftar is unlikely to be able to hold the east of the country unless there is a direct Egyptian military intervention. The balance of power between Turkey and Russia in Libya, on the one hand, prevents either government from establishing control over all the country. On the other hand, it limits the potential for the war to spread to new territories. The key role played by Turkey and Russia in Libya is not to the liking of Western countries, above all the US.

Therefore, the current government of Libya is negotiating with AFRICOM. Libya’s interim authorities are not only demanding the withdrawal of PMC Wagner contractors from Libya. Also, the Libyan Foreign Minister Najla al-Manqoush said in May that it was necessary to withdraw all foreign troops from Libya, including the Turkish.

In fact, it is Turkey and Russia that the US is trying to squeeze out of Libya using pressure. Last week, the US House of Representatives passed a bill imposing sanctions on foreign players supporting the warring factions in Libya. We are talking specifically about Russia and Turkey.

It is indicative that Western partners of both Russia and Turkey in the Libyan conflict are now more likely to support American initiatives to push Ankara and Moscow out of Libya. As Patrick Wintour, a well-known British political journalist and diplomatic editor for the Guardian notes, both the US and Italy and France fear that “Turkey and Russia, both with troops in Libya, will take tighter control of the oil-rich country.”

France is on extremely strained relations with Russia due to the infiltration of Russian military advisers into the French zone of influence in Africa: first the CAR and now Mali. Italy, which has taken positions close to Turkey in the Libyan conflict, has recently intensified contacts with the U.S. on the Libyan issue. On 6 October, US Secretary of State Anthony Blinken and Italian Foreign Minister Luigi Di Maio discussed the matter.

Meanwhile, Mercury Public Affairs is also promoting Mohammed Ali Abdallah as Special Envoy of the Government of National Unity to the United States.

This is the person who led the National Front Party, the pro-Western Islamists close to the Muslim Brotherhood.

Turkey and Russia’s withdrawal – start of a new war?

However, the full withdrawal of the two countries that are now keeping Libya out of large-scale conflict could trigger a new round of war. The United States, having failed in Afghanistan and Iraq, has demonstrated that it is incapable of effectively combating terror and building state institutions. The collapse of French efforts to bring order to Mali and Sahel in general also demonstrates that Paris will fail to in stabilizing Libya.

If Turkey and Russia do not contain both sides of the conflict, a large-scale war of all against all will erupt in Libya. ISIS terrorists will rise again, Libya will become a haven for all types of extremists. This will be the price for containing Turkey and Russia and trying to save the US and European hegemony in the Eastern Mediterranean and Africa.

The withdrawal of Turkey and Russia from Libya, on which Western countries are so insistent, is first of all not beneficial for Libyans themselves, as it will lead not to peace – but to war. It’s effect will not be the unification of the country, but its disintegration into small warring factions.

In such a situation, Moscow and Ankara have common goals of working to remain in Libya on a new legal basis. By doing so, they will ensure both their interests and the security of Libyans.

Security zones – a possible way out

Turkey’s goal in Libya is to ensure the rights and security of the Blue Homeland and its offshore rights. Russia is not opposed to this. Unlike France, which supports Haftar, or the US, Moscow is not fighting for the gas and oil of the Eastern Mediterranean. Both France and Italy (represented by ENI) oppose the rights of Turkey and the Turkish Republic of Northern Cyprus to the gas bearing offshore of the Eastern Mediterranean. Russia, on the other hand, has no particular interest in the offshore.

Unlike the UAE and Saudi Arabia, Moscow is not competing with Ankara for influence in the Islamic world as a whole. For these countries, the conflict in Libya is an episode of global confrontation with Turkey; for Russia, it is not.

Russia supported Haftar in Libya because the previous government in Tripoli (the Government of National Accord) was cooperating with the US at the time, and because Moscow saw Haftar as a contender who could throw the US out, if backed by an anti-US force.

However, Moscow could be persuaded to be satisfied with the status quo. Turkey and Russia have shown that they can negotiate on thorny issues, as happened in Syria. In Libya, the challenge is similar: to establish a negotiation process and to displace, both diplomatically and militarily, the US and Western countries, both France and Italy, from Libya.

In fact, it is the current status quo that is most beneficial for Turkey: Turkey has defended the allied government in Tripoli, which is still friendly to Turkey (as long as Turkish troops, weapons and military advisers are there to protect it from Haftar). The government in Tripoli also recognizes Turkey’s rights in the Eastern Mediterranean. The main challenge is to defend this status quo.

The most logical step would be for Russia and Turkey to agree in principle to preserve Libya’s territorial integrity, with both sides acting as guarantors. Russia could guarantee the security of Eastern Libya, Turkey would assure that of Western Libya. This would be the most realistic prospect for a solution. The border between the two security zones could run along Sirte.

The US and other players have no interest in an agreement between Turkey and Russia. Therefore, Turkey will be incited to stand against Haftar and Russia, in case of Haftar bidding to retake Tripoli. No one will succeed, but the UAE, the French, Italians and the Americans will be able to participate in the conflict. Conversely, if Russia and Turkey agree to peace and keep the necessary forces on the ground in Libya, other players will be kept from entering the game in Libya.

The emergence of two security spheres in Libya, Turkish and Russian, which would coordinate all processes among them, would also contribute to the interests of the Libyans themselves. The number of powers trying to interfere in Libya would be limited. Turkey and Russia are anti-imperialist powers that have never had any colonialist interests in the country.

In Libya, Russia and Turkey are more partners than anyone else. Moscow and Ankara have the same objectives in this country – to maintain their military presence and influence in the country against attempts of the United States and the EU to force them out.