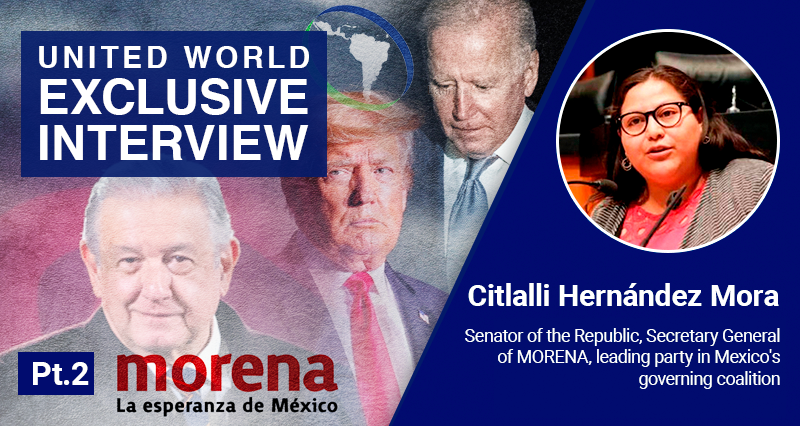 Today we publish the second part pf our interview with Citlalli Hernández Mora, Secretary General of MORENA (Movement of National Regeneration) , the leading party in the coalition governing Mexico.

In this part, Hernández speaks about Mexican-US relations, the new constellation in Latin America and Mexico’s relations with extracontinental powers.

The last US President Donald Trump was widely evaluated as an isolationist, the current President Biden says “the US is back”. How do you see this presidential change in the US? Does Biden have the chance to dominate again, or has the train left?

I am expressing a very personal opinion here. In my view, the presidents of the United States, be they Democrat or Republican, always follow interests when they govern. They always have the imperialist or colonialist position, trying to trample down smaller, developing countries and pursue their own interests.

In that sense, for us, the positions of Trump and Biden are basically not much different from each other, although they follow a different style and rhetoric.

“Domesticating the beast” that shows up in the North eventually

Our President has made it very clear that we will not interfere with their domestic issues, and we expect them not to interfere in ours. We have emphasized the basic rule of diplomacy of non-intervention into domestic affairs and mutual respect for sovereignty. López Obrador made it very clear that we have a sovereign government, which is supported strongly by our people. I think until now our president has succeeded in sidestepping or domesticating the beast, which occasionally the North American government has been historically.

Latin American countries have great expectations from President Obrador, some even seem to desire a Mexican leadership for the continent. What do you think of these expectations for instance in the context of the CELAC?

Latin America and the Caribbean have a common history, face common challenges and have a common adversary. It is not an exaggeration to say that Latin America has suffered extremely under US interventionism, their use of our resources and materials for their development, their fabrication of violence and sustaining of weak governments in order to maintain a certain order on the continent.

In response, various populations in Latin America have been struggling for years to establish governments that are at least more autonomous from the US and more sovereign. There has been a first wave of progressive governments in the continent that modified the relations between Latin America and the United States. And during this wave, alternative models and forums of cooperation, such as the CELAC, were created – as alternatives to those models and institutions that followed US interests.

But today, the presidency of López Obrador creates a great expectation for the geopolitical and economical weight Mexico has on the continent. And López Obrador knows this. Part of our project of alternative nation is to look more to the south, to create a deeper brotherhood with Latin America.

And I think that López Obrador has succeeded to mark a government of sovereignty without confrontation in relations with the US, and he has taken clear stances in crucial moments: he has rejected clearly the coup against Bolivian President Evo Morales. He has rejected the Group of Lima’s destabilizing actions against the government of Venezuela, finally quitting membership in the group altogether. And he opened to debate the functioning of the Organization of American States (OAS), an institution that has played crucial role in all the recent years’ coups. And he supported the strengthening of the CELAC.

In that sense, I think that the given expectations are not only justified but also being fulfilled. And with the elections ahead, if the left wins in Brazil, if the left wins in Colombia, then we will have an interesting reconfiguration in the continent and the world, where Mexico plays a strategic role.

There is a lot of debate about multipolarity. How do you see the role of non-Latin American countries, such as China, Russia or Turkey on the continent?

The almost hegemonic control of the US on the Latin American continent has caused a distancing in relations to other countries. But the new constellation that I described opens the chance for new relations, which allows us different and new connections.

Our President has done that in a very interesting way: He did not only imported North American vaccines, but also has established relations with the Russian and Chinese companies. He did not limit our country to the purchase from a hegemony, but followed a strategy of diversification.

This policy indicates that López Obrador does not want to limit foreign relations to those with the US. He knows that there are other big players.

And although the US is our biggest commercial partner, this is the moment to open us to the new global reality and establish new and deeper relations for instance with Turkey or China or others. In that sense, Mexico can open today open itself up to the globality in this very specific sense of diversifying its foreign relations.

President López Obrador has already stated that when his term is finished, he will retire from politics. What is MORENA’s perspective for the time after?

MORENA as a political party is only 7 years old. In these 7 years, we have achieved great successes, from winning the presidency to getting the majority of the Senate of the Republic and the Chamber of Deputies and the majority of state governors.

López Obrador is without a doubt the central personality. MORENA could not be understood without him, considering his leadership, his tactical intelligence, and his connection with the people. He has the greatest role in this success.

After winning the presidency in 2018, we have had internal debates and conflicts in MORENA, mainly around the question whether we wanted to copy traditional political methods or constitute a genuine political current, based on the organized people, the perspective of a long-haul transformation and a change of consciousness.

The vast of majority of MORENA opted for the second choice, rejecting traditional methods and formulas, which explain the other parties’ failure. To follow their path would mean to take a leave from politics.

We are entering a period of self-definition, where we will have to strengthen our territorial capacity, our formation of cadres, our degree of institutionalization and also intelligently talk about our mistakes to correct them – which political parties often avoid.

And we will continue focusing on the peaceful revolution and the change of consciousness. More than just a political party, MORENA has been founded as a tool for this purpose. And here, we will follow what we call Obradorism, because López Obrador has established a different political thought and method.

My personal view and hope is that López Obrador continues to support us with his experience and wisdom and with teaching our new cadres. But with or without him, we will continue the path of transforming Mexico, because the organized people fuel this process.