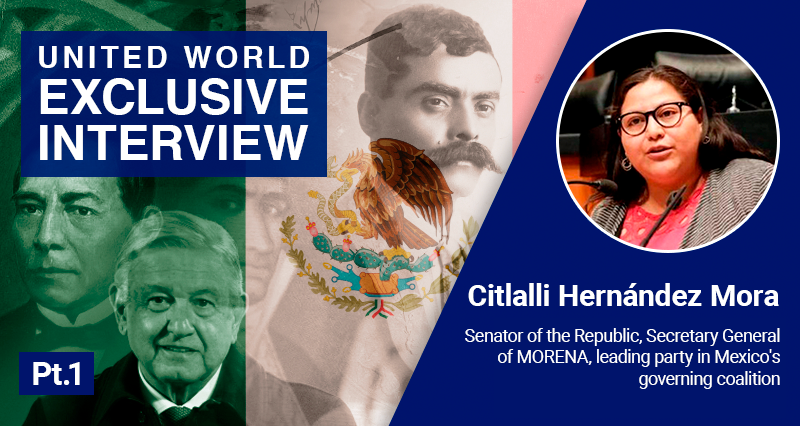 Andrés Manuel López Obrador was elected to Mexico’s presidency in 2018 as the candidate of MORENA (Movement of the National Regeneration), a political party he had founded just 7 years ago. Since the elections MORENA has established itself as the major political force in the country’s political life and succeeded in maintaining its majority in the legislation in midterm elections, although failing to achieve a super-majority to realize constitutional changes.

These days, López Obrador is nearing the midway in his 6-year term of government. He has started his term with declaring to achieve Mexico’s ‘Fourth Transformation’, placing his policies in the tradition of the War of Independence against Spain, the Benito Juarez-led Reform War against the church and landowners in the 19th century and the Mexican Revolution at the beginning of the 20th century.

Renegotiations of NAFTA, temporary presidency of CELAC and domestic reforms followed. López Obrador is currently trying to present the continuation of his presidency to a referendum in March 2022, what the opposition and judiciary rejects. At the same time, the President already has declared to retire from politics when his term ends.

We spoke about the Fourth Transformation, its domestic and foreign adversaries, the institutional struggles and Mexico-US relations with Citlalli Hernández Mora, Secretary General of MORENA and Senator of the Republic. Hernández compared the presidents Trump and Biden, described the changes in Latin America, commented on Mexico’s relations with extra-continental powers and reflected about the future of MORENA when López Obrador leaves.

Below is the first part of our interview focusing on the Fourth Transformation, the struggle against neoliberalism and the adversaries of the movement and the currently hotly debated energy reform.

What does the Fourth Transformation mean for you?

This is a point of rupture with an 80-years-old regime, which was based on corruption, the concentration of power and the concentration of wealth. For our movement, there are three moments that marked the history of our country: The first was the independence, the second was the reform in the 19th century and the third the Mexican Revolution in the beginning of the 20th century.

Following this path, we were not just looking for a change in government but for a break in the history of our country, establishing a new path for our nation. This is the transformation.

In its first and current phase, we follow four goals: The end to corruption, which has become a normal way of governing; reducing the huge gap of inequality with adequate welfare policies; introducing projects of economic development, which liberate our country from the status of being only a raw material producer, thus strengthening Mexico as a big country; and fourth, to pacify a country, which has turned violent due to wrong policies.

These four goals will permit us to begin a new project of nation.

Who are the adversaries of this transformation?

Our adversaries are very clear: The elites in the economy, the elite in politics and the elite in media. Also the elite in the academic world that has benefitted from corrupt policies. All these are losing privileges today and thus resisting the transformation.

There was a network, also with connection to transnational companies, which was benefitting from the decisions of the previous governments. So these are the groups, which are resisting the Fourth Transformation.

One of the stated goals of the Fourth Transformation is a fundamental political reform or even a reestablishment of the state. Does this constitute part of the struggle against the adversaries that you just named?

Yes, because these adversaries have constructed a judicial, executive and legislative institutional apparatus to serve their interests. And we are advancing a project of change, where we in the daily political practice discover the machinery they have constructed to sustain a country of privileges and businesses. This of course needs to be changed with profound reforms.

For instance, we have declared the fight against the corruption carried out by issuing faked receipts, and there were several high-level detentions. But the justice reacted releasing the detained and turning away cases, with a certain legal base. Hence, recently a reform of the Supreme Court of Justice was carried forward to cope with this situation and to be able to open cases against the grand corrupt personalities in this country.

The judiciary then appears to be protecting the interests of the former elite and thus attempting to stop or slow down the process of transformation?

Yes, we have received the majority of the votes and have the legislative power. We have the president with the greatest support in the history of modern Mexico, and we are pursuing a reform process from the executive and legislative branches of government.

Our adversaries have discovered they can use the judiciary to slow down or stop this process by using constitutional complaints, legal objections, corrupt judges that set delinquents free.

To provide you an example, President López Obrador started a huge campaign against the robbery of Mexican oil, a robbery protected and overseen by the state oil company PEMEX itself. They were monitoring the pipelines all the times, and they were well aware of the robbery when they saw a change of pressure and flow in the pipelines. And they didn’t do anything!

Hence, there was corruption and complicity within the state of Mexico, and President López Obrador has achieved to diminish the robbery by 80% during the first three years of government thanks to this campaign. But corrupt judges have released several of those that were detained during this process.

The struggle against neoliberalism

The Fourth Transformation claims to struggle against neoliberalism, which in Mexico meant opening of the national economy to the world market, entering in a huge dependency above all from the United States. What is the content of the transformation in regard of the foreign relations?

When we declare to fight against neoliberalism, we face a huge challenge, basically because we are neighbor of main representative of global capitalism, the North American Empire.

I think the President has succeeded in recovering the sovereignty that we had lost during the previous weak governments – without a  let’s say exaggerated confrontation with the North American government. López Obrador has been very firm in various issues of debate, while maintaining a polite relation with the United States.

At the same time, we have made clear that some conditions have to be fulfilled. For instance concerning agriculture. Mexico has been a main producer and consumer of corn, which has a great importance in our nutrition, but our production has diminished in the recent years within the neoliberal model and we started importing great part of our corn consumption from the US. Hence, there is a slow but steady process of revitalizing the Mexican agriculture.

Similarly, we are strengthening the Mexican oil industry by cancelling certain contracts that were very profitable for transnational companies but not benefitting the Mexican state. Now we are constructing new oil refineries that shall strengthen Mexico as an oil producing country.

Also, Mexico counts with the world 9th largest reserves of lithium. In the energy reform, we state clearly the goal of nationalizing the lithium reserves. Mexico is beginning the establishment of a lithium exploration and production industry.

With these measures concerning agriculture, energy, lithium and national infrastructure projects, we are strengthening our national sovereignty and our national industries while stopping privatizations and transitioning to a model less neoliberal.

Is the new model one that places the state more into the center of economy?

Exactly. The basic idea is positioning the Mexican state as the main actor in the economy. We are achieving this with mounting debt, without entering into dependence from financial deepening debt and depending on financial organisms. This is a major achievement in my eyes.

We have succeeded in fighting the pandemic without borrowing resources from the big international funds, while offering vaccination to practically the whole population.

And currently your government is advancing with the energy reform, which is much debated and criticized, also by foreign actors. What is the main goal of this reform?

The critics come from sectors that benefitted from the weakness of the Mexican state. Our national resources and income was practically delivered to them. For instance, the governmental Federal Electricity Commission had been weakend in favor of the Spanish company Iberdrola. And the former President Felipe Calderon is an adviser of Iberdrola. This is the triangle I tried to describe above: Politicians come to government, make legislative or administrative changes in favor of these companies, and when they leave position, they transfer to exactly those companies as advisers which benefitted from the legal changes.

President López Obrador’s reform package now changes the state’s position towards the creation and distribution of electricity. It introduces a new balance, where the state owns and distributes 56% of the electricity, while the private sector organizes 44%.

The idea behind the reform is simple: We want to recover our energy sovereignty. Additionally, we observe all over the world that privatization leads to higher tariffs for end-users. And when there is a crisis, there is a huge difference between the reaction of the private sector producers and that of state companies. Private sectors actors react much slower, because they treat electricity as a commodity and for instance repairs or necessary investment as cost. Instead of that, our government considers access to payable electricity as a human right. That means with this reform, the Mexican state assumes the responsibility to deliver to all the population energy to affordable prices.