“The world is in transition” 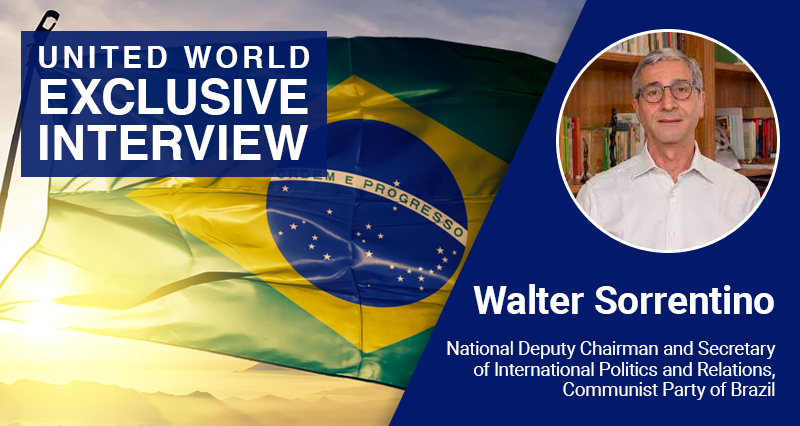 The decline of US hegemony and the rise of different poles of power are debated everywhere in the world. Being a member of BRICS and one of leading countries of Latin America, Brazil has a special weight in these debates.

The recent agreement between CELAC and China has provided a greater weight to the Asian country in the debate ongoing south of the United States. We interviewed on these matters Walter Sorrentino, National Deputy Chairman and Secretary of International Relations of the Communist Party of Brazil, which in coalition with the Labor Party is preparing for the presidential elections in 2022.

What kind of a world do you observe from a Brazilian point of view?

We observe that we are in a world of transition. The unipolar world, which the United States declared after the collapse of the Soviet Union, has not achieved to establish an order truly. The U.S. has not succeeded in that.

Be it capitalist or socialist, several poles are emerging, for instance India, China and Russia, but as well South Korea, Turkey, Brazil and Mexico.

System of nation-states struggling for national development and autonomy

There is actually no multipolar world. This idea is a wrong conception. What we have is a system of nation-states that struggle to achieve national, sovereign and autonomous development to reconfirm the nation. This situation is obviously much less stable. This situation is characterized by action and reaction. China is rising and the U.S. is reacting to this rise.

Hence, there is a tendency of anti-hegemonic development. And for us here in Latin America, this situation provides new opportunities and new balances of power, in spite of the Monroe Doctrine, which the U.S. considers untouchable.

What means the rise of China for Brazil concretely?

Brazil has achieved an industrial development, including success in establishing a complete chain of production, which are today threatened by neoliberalism. Being one of the world’s important countries in terms of population, GDP and industrial base, Brazil faces today not identical but similar challenges as China.

Brazil-China is not only trade

We have today two important tasks: First is the progress of Mercosur to achieve a greater Latin American integration and a greater domestic market, and the second is BRICS, a true treasure that even includes a Bank for Development, which by the way was presided by a Brazilian when founded. These two are strategic weapons to gain greater space for development.

Now, Brazil has great a lot of commercial relations with China primarily in agriculture. But our relations are not limited to trade. Brazil’s oldest and most comprehensive agreement in technology is with China, not with the United States!

How is the conflict about a world in transition, in other words, the transition to a world with various poles reflected in domestic Brazilian politics?

Look, the dominant classes in Brazil were always very dependent of the United States, but today, this dependency realizes itself through the financial sphere and ideological sphere.

Hence, concerning the financial sphere, policies of neoliberalism, the ideological field, the cultural relations, we are highly connected to the United States. But when it comes to interests, to the will to produce and sell, we are looking towards other parts. This constitutes a contradiction.

The hegemonic classes of Brazil do not have the capacity to solve that contradiction in favor of a national development. But when Lula was governing Brazil, all of them were on his side, because they were making money on his side thanks to the established relations of export in various economic sectors. But that did not prevent them from cutting his head when they had the chance to do so.

Notwithstanding, there is a tradition in Brazil of exploiting international contradictions and to follow the national interest. Example: Despite the US interference, Brazil did negotiate nuclear energy production with Germany. And the right wing dictatorship back did this then.

There are broad patriotic sectors in Brazil. But to conclude the project of the national development successfully, we need the leadership of the popular classes and the left. There are productive tensions within the Left, but because of having governed Brazil before, Lula with his great capacity is able to lead these tensions towards a joint project of national development.

The Communist Party of Brazil, completing 100 years of existence with great influence in our country, defends a new national concept of development, a development that is sovereign, inclusive, democratic, Latin American integrationist and environmentally sustainable. This is for us the road to socialism.

And the emerging new global powers and Brazil’s relations with them constitute for us a strategic reserve. And what we need to do is make use of this world in transition to favor our national, sovereign and autonomous development.