“Impossible to maintain government economically without relations to China” 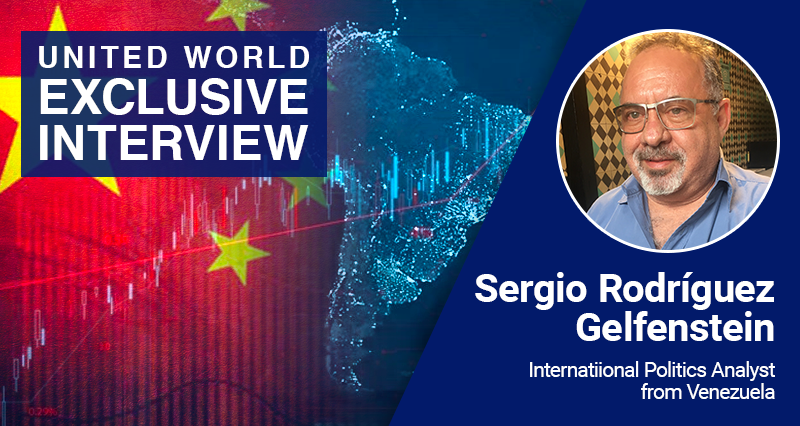 Latin America is the so-called “Great Fatherland” that seeks to establish regional integration for the last 200 years. China is the new emerging pole in what some call the Great Power competition.

The relations between the two have been much discussed in the context of multipolarity, where different blocs on the globe establish direct exchange without the interference of the hegemonic powers such as the U.S. or Europe.

Is the approximation between Latin America and China an ideological matter? Are deepening economic relations having consequences in the political field as well? And how to evaluate the recent agreement between the CELAC (Community of Latin American and the Caribbean States) China?

I spoke on these issues with Sergio Rodríguez Gelfenstein. Gelfenstein is Venezuelan international relations expert, who was previously Director of the International Relations of the Presidency of the Bolivarian Republic of Venezuela, his country’s ambassador to Nicaragua and an advisor for international politics for TELESUR.

Gelfenstein has written numerous books, among them “China in the XXI Century – the awakening of a giant” which has been published in several Latin American countries.

The interview was conducted in Mexico City in October 2021 and amended with the latest developments via phone.

How would you describe the relations between Venezuela and China?

Venezuela and China had diplomatic relations for 45 years, but these were mostly formal until Hugo Chávez arrived at power. With his government, relations developed extraordinarily and became, what the Chinese call ‘comprehensive strategic association’. China started considering Venezuela as a country of priority.

This is based on the fact that Venezuela is one of the world’s most important oil producers, in addition to great reserves of gas, gold, diamonds, coltan and other minerals.

Additionally, the ascendance of Xi Jinping to power has changed Chinese politics transcendentally, both in domestic politics and in international relations, with a major weight for ideological-political positioning. In consequence, Chinese foreign relations are not limited to the economic and commercial dimension anymore, as they had been in the past 40 years. Today, there are new, non-hegemonic political interests.

This is a reaction to the fact that since the Obama administration, and much more with Trump, the US aggression towards China has increased, leaving China no room for a passive response. Beijing has not responded with the same political-military aggression as the United States presented, but well has increased overall all commercial, political, cultural relations to other countries including – currently very actual – cooperation in health policies.

And this is not new for Venezuela. Venezuela has entered multidimensional relations with China. This includes cooperation in for instance infrastructure and energy politics, but also coordination of positions and policies in multilateral institutions. And of course, China has provided now very vital help in the context of the pandemic.

Hence, the relations are in a very good shape, and of permanent character, which is visible in all parts of society.

First of all, let me emphasize the general context. In general, all right wing parties say they are going to cut relations with China – when they are in the opposition. Argentina’s former President Macri did so; Brazil’s Bolsonaro did so. They all say so. Especially during the Trump administration, when the international relations were loaded with an ideological weight. In this period, right wing parties tried a counter-offensive in Latin America accompanied by an approximation to Trump.

But at the end, they all ended with China! When Xi Jinping was elected Secretary General of the Communist Party of China, Macri sent him a congratulations letter!

Because, when they get to government, they revise the accounts, budgets and the statistics. And they become aware that they cannot cancel relations with China, because it is already the first or second most important trade partner. It is impossible!

And the businessmen of their country themselves stop them from any further steps. The case of Brazil was very enlightening, very clear, for instance. Bolsonaro got to the government, saying he would cancel relations with China. But his own Vice-President, Hamilton Mourao, an army general by the way, stopped him. In the middle of a very hard war-of-words, a very harsh conflict, the Vice-President travelled to China and delivered a guarantee that there wouldn’t be rupture of relations. And this is what actually happened.

Hence, the same goes for the opposition in Venezuela. When they were trying to establish an alternative government, they advanced these ideas rhetorically. But it’s only rhetorical, trying to get the support of the most reactionary forces.

But wherever the right wing parties come power, they turn away from this discourse. It is today impossible to maintain a government in economical terms without having relations with China.

No resources in the World Bank of the IMF

Another reason is: you go to the World Bank, to the IMF, to the US or to Europe – and you’ll see there are no financial resources available. If you are looking for fresh resources for investment – these are in China.

Therefore, I would say the anti-Chinese discourse is mainly rhetorical and a heritage of the Cold War mentality. And in the negotiations between government and opposition in Venezuela, relations with China are not on the agenda. And I think that the Venezuelan opposition also starts to become aware that, when you assume government responsibility, things are different.

On the other side, China has good relations with Cuba, Venezuela, but it maintains also excellent relations with Colombia, Chile and Brazil. They do not differentiate. In Argentina, China had excellent relations with the Presidents Christina Kirchner, with Macri and now with Alberto Fernandez – leftst, rightist, leftist. The Chinese part makes no extreme positional changes because there is a change in government, in difference to what we here in Latin America were used to observe from the U.S.

What is your prediction concerning China’s economic and political weight in Latin America?

In terms of economics, China is already the trading partner No. 1 for a number of countries such as Chile, Peru and Brazil. And for the rest of the Latin American countries, it is the second most important trading partner. And the trade volume is increasing extraordinarily still.

In terms of politics, as I told you, there is still this Cold War view of rejecting relations with the ruling Communist Party. Much of that is limited to rhetoric. Notwithstanding, of the 15 countries that maintain diplomatic relations with Taiwan, 9 are located in Latin America.

From Taiwan to China: Nicaragua did it and Honduras may follow

In December, Nicaragua changed relations from Taiwan to China recognizing the “One-China-Principle” and decreasing the number of Latin American countries with relation to Taiwan to 8.

In addition, Honduras, whose president-elect Xiomara Castro will assume power on January 27 may follow, as she already had announced before the elections the will to reestablish relations with China. But her announcement has caused tensions within the new government coalition, as Vice-President Salvador Nasralla has rejected such a step.

In the political dimension, China has an interest to change this situation. In the recent years, Panama, El Salvador and the Dominican Republic have cancelled diplomatic relations with Taiwan and instead established these with the People’s Republic of China.

With the radicalization of Taiwanese politics, with the separatist party in power there, the Chinese position also radicalizes. While the Guomindang was in power in Taiwan, there was a tacit peace, which included that China did not interfere into Taiwan’s external relations. But now, they are in a situation of extreme conflict.

And then there was the pandemic, where China has cooperated with countries with which it had no diplomatic relations, sending vaccines, oxygen, help etc. This has generated a positive change in the public opinion in these countries.

Companies pressuring for relations with China – the case of Paraguay

At the same time, business people in Latin America are also pressuring. Take for instance Paraguay, the only country in South America that has no relations with China. Business circles in Paraguay are pressing their government hard to establish these. Why? Because Paraguay is a main exporter of meat and soya, one of the world’s most important ones, and China is a consumer of these products with a gigantic market. But they have no diplomatic relations. What do the Paraguayans do? They have to send the meat to Brazil and export it from there, declaring it as Brazilian meat, which of course raises the selling price or decreases the income due to middlemen. Hence, Paraguayan companies are demanding the establishment of formal, diplomatic relations.

In sum, the economic relations are developing and deepening and the political relations are following. China has recognized the CELAC as a counterpart in 2014. In 2015, the first ministerial summit China-CELAC was held in Beijing, the second in 2018 in Santiago de Chile in Chile, and the third summit was to be held and was postponed due to the pandemic.

And recently CELAC and China have signed an agreement. How do you evaluate this agreement?

This agreement, the China-CELAC Joint Action Plan for the Cooperation in Key Areas (2022-2024) is one of the most important news on the continent.  The plan touches in 7 chapters on a broad range of issues, from political cooperation to security. The document for instance establishes joint work for the implementation of UN Resolution 1540 to “prevent effectively the proliferation of weapons of mass destruction”. Both sides also agreed to cooperate in the struggle against all kinds of terrorism, transnational delinquency, illegal arms trade, money laundering and cybercrimes.

Those who try to show that China’s interest in Latin America is limited to the access to raw materials should take a good look at the agreement. Besides promoting commercial exchange, it also supports joint investments, the creation of joint commercial entities and the strengthening of cooperation among companies.

In that sense, Beijing and the CELAC have agreed to deepen cooperation in the infrastructure, telecommunication equipment, 5G, big data, cloud computation, artificial intelligence and intelligent cities.

The two sides have also promised to cooperate and deepen exchange in sectors of aerospace, civil aviation, public policies, energy sector and its resources, tourism, transportation and environmental protection.

China will seek to provide a “key support” to strategic projects that benefit the economic and sustainable development of Latin American countries. The two sides also look for further cooperation in agriculture, exchange of scientists, civil use of nuclear energy and the response to climate change.

Finally, the Asian country and the CELAC have assured to implement actively an Agenda 2030 for sustainable development with the goal to achieve “a more solid global development, greener and more equal that leaves no one behind”.

I think this agreement shows clearly the course of the relations between Latin America and the People’s Republic of China.