The Caucasus today and tomorrow 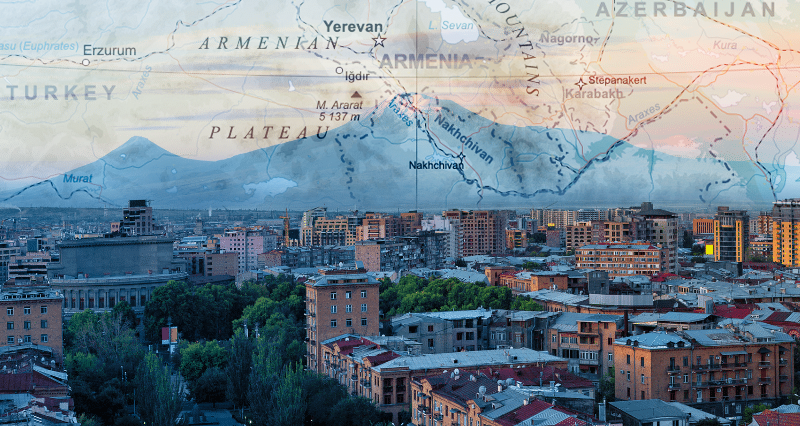 The year 2021 laid the foundation for a new experience in world history. Two countries, which have been enemies for many years, can live in peace again in the South Caucasus.

Azerbaijan and Armenia have been at war for 30 years, and after the 44 day Karabakh war, an agreement was reached between the parties. Many well-known experts did not believe that peace would be achieved between the two Caucasus countries. However, what happened in 2021 managed to break these stereotypes.

After the ceasefire agreement signed between Azerbaijan and Armenia on November 10, 2020, this ceasefire was violated several times and there were losses on both sides. However, the agile and wise decisions of the mediators brought the two hostile countries closer to signing a lasting peace agreement.

The leaders of Azerbaijan and Armenia met several times in 2021. Most of the meetings took place in Russia. It was through the Kremlin that mediation and rapprochement took place. The last meeting between the leaders of Azerbaijan and Armenia took place in Brussels on December 14 with the mediation of the European Union, and the parties agreed to open a railway line.

In fact, this agreement was reached at meetings in Moscow and Sochi. Nothing new happened in Brussels.

With the exception of minor border incidents, we can say that there are no serious problems between Azerbaijan and Armenia today. Recent statements by the leaders of the two countries also increase confidence in the achievement of lasting peace in the region. In this regard, all hopes are focused on 2022.

2022 will be of historic significance for the South Caucasus; Azerbaijan is seriously preparing for 2022. Rapid work is underway to restore the liberated lands and open communications in the region. A number of projects have already been completed and the next stage has been launched. After the opening of the first international airport in Karabakh, all eyes are on the Zangezur corridor.

There were serious disagreements over this mega project at first. Armenia, which initially opposed Azerbaijan’s insistence, finally agreed to the project. In fact, there was no other option for Yerevan, as this issue was part of the tripartite agreement dated November 20, 2020. Russia was also the guarantor of the Zangezur corridor. However, until the last moment, the Armenian government refused agreement on this project. In the end, Azerbaijan’s successful diplomacy showed its strength at the negotiating table.

The Zangezur corridor is about to open and Azerbaijan is about to complete all the work it has to do on this project. This corridor will not only unite Azerbaijan and Turkey. Through the Zangezur corridor, Armenian citizens will be able to travel freely to and from Russia and Iran. At the same time, economic transport routes from China to Europe will have a more efficient and cost-effective route through this corridor.

2022 promises success for Armenia as well. The constructive position of the Armenian government in recent weeks is like an investment in the future of the Armenian people. Because the Armenian economy, which has been pursuing a policy of aggression for many years, was below zero, the deepening economic downturn in the country has also affected socio-political life. For this reason, tens of thousands of Armenians were forced to leave their country.

A new page for Armenia

Today, Armenia is on the verge of launching a policy of friendship with its neighbors, especially Azerbaijan and Turkey. It is necessary to pay special attention to relations with Turkey, because Turkey, the closest strategic ally of Azerbaijan, has cut off all diplomatic relations with Armenia due to the conflict, and the land borders between Turkey and Armenia have been closed for many years, because Armenia had been occupying Azerbaijani lands. Today, the conflict is over, the problems are behind us, and it is time to take steps toward the future.

And steps are being taken, affecting all countries in the region and ensuring peace and development.

Today, the restoration of diplomatic relations between Turkey and Armenia is on the agenda. Ankara and Yerevan have appointed their official representatives to launch political contacts between the two countries. Istanbul-Yerevan flights are about to start. Land borders between Turkey and Armenia are expected to be opened in the near future. This will make a significant contribution to the Armenian economy. The realization of the 3 + 3 cooperation format in the region is very real. The only factor that will hinder this cooperation may be the influence of the West on the countries of the region.

Why are the US and Europe so worried?

The new conditions created after the end of the Karabakh conflict do not satisfy the United States and Europe. The West seeks to escalate tensions in various ways and increase tensions through artificial provocations and reduce Russia’s influence in the region. For this reason, the United States and Europe are pursuing their policy through Georgia, their only ally in the region, which is seriously hindering the implementation of the 3 + 3 format.

Unfortunately, Tbilisi is not able to pursue an independent policy and acts as an outpost of the West. For this reason, the implementation of the 3 + 3 cooperation formula in the Caucasus has been stalled.

In any case, 2022 comes with high hopes for the region. The era of war is over. We can say that the era of peace, cooperation and economic growth is beginning. For this, it is necessary for the countries of the region to act together and reduce external interference to zero.