Sudan: Egypt’s plan versus the US’ 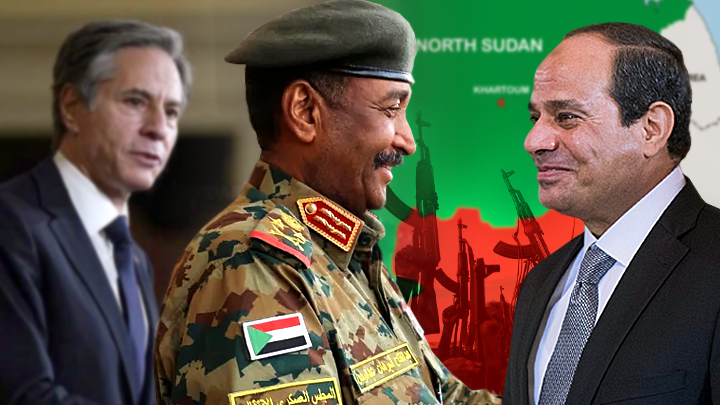 The early adoption of a position on the extraordinary actions taken by the Sudanese Sovereignty Council under the leadership of General Abdel Fattah Al-Burhan on October 25,will help sort political naivety from false idealism.

Many human rights advocates like to call on the countries of the Middle East, including Sudan of course, to build Western-style democracies based on the ideas of fair and honest elections, guarantees of freedom of expression, and a civilian government that expresses the interests of voters. In their view, this would guarantee the welfare of citizens.

But the quiet scrutiny of these demands clearly reveals that democracy in this way is nothing more than an end in itself, although it must be a means to achieve political stability, economic efficiency, social security, and the higher interests of society.

But if democracy in this specific form is unable to achieve these goals together, should the state – any state – and its citizens bear the cost of this choice? Or is debugging and error handling the best way?

The revolutions in the Arab Spring, which broke out in numerous Arab countries more than 10 years ago, put the peoples and elites of the region in front of a naked truth: democracy alone does not feed the hungry.

Over the past two decades, many countries in the region have been on the defensive in the face of Western demands for a representative democratic system that guarantees freedom of expression.

But the chaos that caused the deterioration of the security situation in the Arab world with the outbreak of revolutions in more than one country, and the inability of transitional or elected governments after those revolutions to meet pressing economic demands, were two of the main reasons to reconsider everything that happened.

Many of the region’s revolutionaries believed that the deterioration of the Arab human rights situation, poor economic conditions and political corruption had no solution except establishing a democratic system in the Western style.

Everyone who supported the revolution from outside the region viewed democracy as a tool to prevent political repression, allow freedom of expression and choose an elected authority. No one paid any attention to citizens’ real needs in terms of employment, education, and health care, or their natural rights to housing and security.

With the situation deteriorating from bad to worse, the Egyptian people surprised the world with a new revolution against the elected regime following the January 2011 revolution. The world at that time did not understand what had happened.

From defense to attack

However, Egyptian state institutions understood the consequences, and shifted from the defensive position adopted during the days of former President Hosni Mubarak in the face of Western demands to establish a representative democratic system, to an offensive position during the era of President Abdel Fattah Al-Sisi.

During the latter’s era, the Egyptian state adopted a different approach, acknowledging that the representative democratic system in the Western way cannot succeed with the click of a button in meeting the needs of citizens and respecting human rights.

According to the new Egyptian position, democracy alone, missing the society’s readiness for it politically, culturally, socially and economically may be worse than tyranny.

During the years of Sisi’s rule, Egypt established a clear position that it announced without shame, which is that the results achieved by Western democracy were only available with solid political infrastructure and guarantees that were settled after decades of mistakes and frustrations and an accumulation of experience, and after building a strong economy capable of meeting the needs of citizens and fulfilling their social and economic rights before the political ones.

The new Egyptian approach is based on the fact that human rights are not only political rights or the right to expression, but there are social and economic rights that require huge financial and technical support to which the West must contribute.

Therefore, the Egyptian approach clearly says that Western democracy took decades of trial and error until rights were firmly established, and that the level they have reached now should not be demanded by our societies before ensuring the basic rights of citizens, including housing, good infrastructure, better education and health care. According to state officials, this achieves freedom of choice for voters so that they do not become a tool in the hands of political vote-brokers. According to this approach, stability and social and economic rights precede democracy.

This approach was clear from President Sisi and many Egyptian officials in press conferences with Western leaders. It was not surprising that this was part of Foreign Minister Sameh Shoukry’s speech during his meeting with his American counterpart Anthony Blinken, who focused on the recent developments in Sudan.

In the press conference, Shoukry said that Egypt would “continue to forge our path towards a modern democratic state”, but that “equal attention” needed to be dedicated to “political rights and civil liberties and economic and social rights” as “orderly change” offered Egypt “the best chance to succeed.”

These statements by the Egyptian minister reflect Cairo’s understanding of the situation in Sudan.

Egypt realizes that the exceptional measures resorted to by the generals there were necessary in light of the two states of impotence that characterized the performance of the civilian government led by Abdullah Hamdok in the face of the deteriorating economic situation there and the impatience of the Sudanese people, who were waiting for a glimmer of hope.

By the way, Egypt, one of Sudan’s neighbors, was notably absent from a recent joint statement issued by the US, United Kingdom, Saudi Arabia and United Arab Emirates, calling for a “full and immediate restoration” of Sudan’s “civilian-led transitional government and institutions.”

Egypt’s position on what happened in Sudan is a principled and self-consistent position, and it has previously been similar to what happened in Tunisia, when the president took exceptional measures regarding the state of popular rejection of the political chaos and the deteriorating economic conditions.

But very frankly, the Egyptian position, in my opinion, goes beyond what is principled, as it is linked to many other considerations. Among these considerations is the strong personal relationship between President Sisi and General Abdel Fattah al-Burhan.

But the most important thing is that Egypt sees the exceptional measures taken by Al-Burhan as a guarantee of Sudan’s stability and that matters will not go unmanaged, which is an important matter in a neighboring country. Cairo believes that Sudan is fragile in the face of foreign interference whose influence may increase in light of the deteriorating security and economic situation, which negatively affects the Egyptian borders and interests.

In this context, we must understand that the Egyptian position does not stand against the civilian side as much as it supports the continuation of the military role in a way that prevents the country from sliding into chaos.

On the other hand, Egypt fears the instability of Sudan, because this weakens its position in the face of Ethiopian allegations regarding the dispute over how to operate the Renaissance Dam.

A cost-free opportunity for America

After the Sudanese army changed the arrangements for the political process in his country, neither US President Joe Biden, nor his Secretary of State Tony Blinken, nor his National Security Adviser Jake Sullivan spoke on air about what happened, and the president did not address the American nation or the Sudanese people. It took five full days for a presidential statement to come out from the White House calling on Biden to restore the civilian-led government in Sudan.

The US statement was clearly biased towards the civilian side, apparently in the context of the Biden administration preaching the values of democracy globally and considering it as a basis in the alliance with Washington.

Biden’s statement seemed to flirt with his supporters, but the fact that his administration’s handling of the developments in Sudan reflects the decline and limited importance of Khartoum in the priorities of American interests. The only gain that events provide for the Biden administration is that they serve as an opportunity to demonstrate their support for democratization without exorbitant cost to Washington.

The failure of the democratic transition in Sudan does not mean much in terms of Washington’s interests. Hence, Biden can impose harsh sanctions, ban Sudanese military leaders from entering American lands, stop aid to Sudan in all its forms, and obstruct and prevent the IMF and World Bank’s dealings with Khartoum.

It seems that the American position towards Sudan’s generals will be strict. Sudan does not have strong military relations with the Pentagon, and does not buy American weapons worth billions of dollars annually, and there is no significant commercial exchange between Sudan and the United States; Sudanese military and civilian elite are not linked to Washington. The Sudanese community in the United States does not have electoral weight, or significant economic and financial weight, for decision-makers in Washington to care about. It is not well known that successive Sudanese regimes, lobbies and public relations companies used to communicate and influence decision-makers in Washington, much like other non-democratic countries that do not hesitate to spend millions of dollars to polish their image within the circles and centers of power in Washington.

The Biden administration did not impose serious sanctions on allied countries that violate human rights, or else the political cost would be great. At the same time, the US administration can do the opposite in the Sudanese case: it can triumph over values and principles at the expense of its simple interests with Khartoum.

Washington did not lose anything during the 30-year rule of Omar al-Bashir, although it classified Sudan as a state sponsor of terrorism in 1993, imposed many trade and economic sanctions on it twice in 1997 and 2006, and reduced the level of diplomatic relations with it.

But apart from the Egyptian and American positions regarding what happened in Sudan, everyone should work to save Sudan as a state. The current situation makes the remaining options very limited.

The army must ensure the continuation of the transitional process in order to achieve a democratic transition, and protect the country from chaos or penalties that the economy cannot bear. Sudan is economically and politically weak, and the economy cannot survive without the technical expertise and support of development partners. This is a situation that the military will struggle to change unless it is able to build the external relationships necessary for continued economic support. Given the current difficulties facing the country, this would exacerbate an economic outlook that threatens with catastrophic security repercussions.

At the same time, civilians must reassure the military as an institution of its economic privileges, and the generals as individuals about their political and criminal responsibility for abuses and crimes committed during the Bashir years and beyond. They must recognize that the goal of transitional justice is the country’s interest, not revenge, and that learning from the lessons and mistakes of the past is the best way to avoid its tragedies.

If both sides refuse to make real concessions in order to achieve genuine reconciliation and avoid infighting, Sudan will only witness further political and economic deterioration.

These conditions in that country will provide opportunities for separatist tendencies in many areas of Sudan. This will inevitably lead to civil wars that are not excluded in a country of which 3 lived even before its independence.