The new equation in German politics 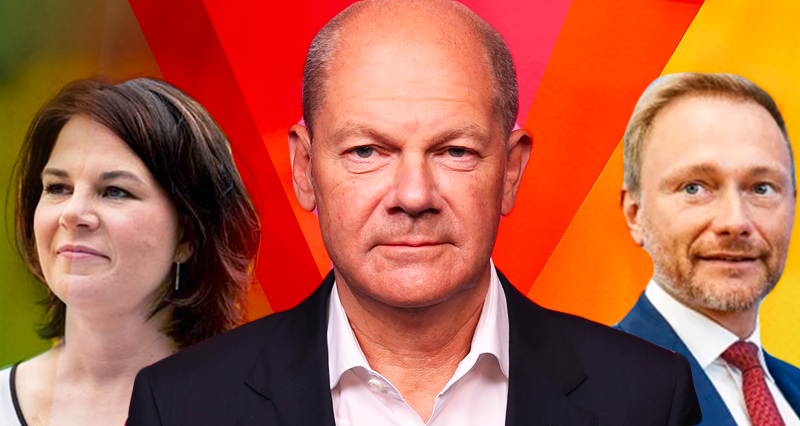 As far as the leadership race is concerned, Germany has just left behind its probably most suspense general elections. The election results confirmed almost completely the polls that were published in the recent weeks. Still, the 2021 elections have brought about developments that will be much debated in the coming times, leading to political changes in German politics.

Following the decision of Angela Merkel to retire from politics, her party, the CDU/CSU (Christian Democratic Union / Christian Social Union) has achieved with 24.1% the worst electoral result in its history. Starting with Chancellor candidate Armin Laschet, all high-level officials of the party pointed to a loss of 9% votes and admitted that results were disappointing. Concerning the results in different federal states in Germany, the CDU/CSU is the leading force in only two out of 16 states: Bavaria and Baden-Württemberg. The news magazine Der Spiegel reported on this fact with the headline “The End of the Black Republic” – black being the representation color of the party.

The SPD (Social Democrat Party of Germany) on the other side received 25.7% and became first party by a slight difference. The social democrats, who were announced as winners of the elections, received 5% more votes then in the last elections. Moreover, the SPD, whose popular support had veined in the recent years, recovered during the election campaign, as some months ago polls were indicating the party’s votes at around 15%. We can say that the SPD in a way realized a surprise and came back to life in 2021, also partly thanks to the performance of Olaf Scholz, the party’s candidate for Chancellor.  In result, the SPD has surpassed the CDU in general elections for the fourth time in German history. Additionally, the party has also won the regional parliamentary elections held in Berlin and Mecklenburg-Vorpommern the same day.

The Greens also have celebrated in the evening of the elections, as they received with 14.8% the highest vote in their history, resulting in a 6%-rise compared to the last elections. Still, the result was lower that several polls indicated during parts of the campaign, when the party was receiving temporarily above 20% and its candidate, Annalena Baerbock seemed to have chances to win the race, becoming Chancellor of Germany. In that sense, the party gained votes below expectation, but still seems to have fortified its position in German politics for the times ahead.

Another successful party in the elections was the liberal FDP (Libertarian Democratic Party). Raising its votes by 0.7%, the FDP gained 11.5% and enjoys to have received a two-digit-result for the second consecutive general elections. The FDP, which in the past from time to time appeared to be too much attached to the CDU, presented itself in this elections as an independent force. The party’s chairman, Christian Lindner, expressed this fact in the election night in a clear manner.

Another important development is that the extreme right wing AfD (Alternative for Germany) has lost 2.3% votes. In the last legislature, the AfD had been the third strongest party in the parliament and the main opposition group. In these elections, the AfD has received 10.3% and ended up as the fifth party. Still strikingly, the extreme right seems to have solidified a share of around 10% of the votes, with the AfD resulting strongest force in two different federal states.

The party The Left has suffered the greatest defeat in these elections, by losing 4.3% of the votes and ending up below the election threshold of 5%, with a share of 4.9%. The party still has succeeded to enter the German parliament, because it has gained three direct mandates, which cancel the 5% limit in the German electoral system. It is expected that the Left now will enter serious interior debates, which may even result in divisions.

A new order of political parties in German politics

The main result of the 2021-elections is a new constellation between the political parties. In the first time in the history of the Federal Republic of Germany, four different parties have received a so close share of votes to each other. The votes of the CDU/CSU and SPD, the two parties that until today always led the efforts of government building, have fallen the first time to the level of 25%. If we take into account the Greens, which have raised their votes significantly, and the FDP, which also gained, than we face the following picture: Four political parties that have an average size, all being potential coalition partners to each other.

Two main factors in this picture need emphasis. Firstly, the political program of all these four parties has become quite similar in the past years concerning the main positions. This also explains voters’ wandering among them. Secondly, the society is dissatisfied and in a search, which has crushed the governing party’s power and led to votes escaping to other parties.

Accordingly, the CDU/CSU has lost votes to other parties as never before. The Christian democrats lost almost 2 million voters to the SPD, while 1 million citizens who voted for them in the last elections this time elected the Greens. The CDU/CSU also lost 400 thousand votes to the FDP. According to an analysis of the daily newspaper Frankfurter Allgemeine Zeitung, ‘Merkel’s votes’ were diffused among all political parties.

It seems that for this reason, coalition negotiations will require a long time. Signs appeared already in the election night. While Olaf Scholz declared himself winner, stating that the duty to build government should be handed over to him, Armin Laschet, candidate of the CDU/CSU also declared that he is willing to start talks to build a governing coalition, in site of the fact his party came second. Scholz responded a day later via twitter: The electorate strengthened three parties in the elections: FDP, the Greens and the SPD. This is a sign that these should constitute the coming government.”

The CDU leader Armin Laschet’s ‘demanding’ behavior caused criticism on different fronts. First of all, his own party criticized this positioning. Upon this criticism, Laschet also admitted that Scholz had the priority in establishing the government, but insisted that, in case the SPD’s talks terminated in a dead end, his party was ready and willing. On Tuesday, the CDU’s sister party CSU’s chairman Markus Söder, who before had competed with Laschet to become candidate, has also held an important press conference. Söder congratulated Scholz for the electoral victory, expressed that his party had received a huge defeat and had to recognize the results. Söder stated they would not demand to build the government right now, the priority belonged to the SPD and that the most probable figure to become Chancellor was Scholz. This and other developments show that currently, the CDU/CSU is dominated by an atmosphere of defeat and internal conflicts are on the agenda. Though not very loud for the time being, voices have already been raised within the party calling Laschet to resign.

The Greens and the FDP will shape the coalition talks in a manner unseen before. German press even talks of these two parties as the “Chancellor-makers”. Their weight reaches that far that, on Wednesday, the Greens and the FDP will talk among each other before starting the negotiations with the SPD. There are important differences between them especially concerning the economy policy, where they will try to get closer. Contrary to the expected, the FDP may in the last moment choose to build a coalition with the SPD instead of the CDU. That way, the FDP will have avoided sharing the CDU’s defeat and a possible negative reaction in society. On the other hand, the party that always appeared very attached to the CDU, will demonstrated the appearance of an independent “party for Germany”. And doing that, the FDP will be able to bargain hard with the SPD due to its decisive position. It is well known that Christian Lindner, the party’s chairman, wants to be minister for finance.

Will the societal unhappiness be solved?

However the coalition talks proceed and what kind of government is established, the population seems unhappy with the general situation. Polls immediately after the elections show that clearly. 60% of the questioned approve the phrase that ‘in the short term, no one will fill the void left behind by Merkel’. Only 38% of the participants disagree with that. More interesting are the answers in another poll concerning possible coalitions: 50% of the questioned reject the so-called Jamaica Coalition (CDU – The Greens – FDP), while 20% support it. 47% of the surveyed also rejected the Traffic Light Coalition (SPD – FDP – The Greens), while only 24% supported it. Other possible coalitions received similar answers.

Lastly, taking into account the whole electoral campaign and results, one might expect some surprises and even societal turning points in German politics in the times ahead. The voters have remained undecided until the last moment, and thousands have changed the party of their support. These facts show that the population is still in a quest. Additionally, the unhappiness and disappointment of the voters are shown as an important factor in all published polls. Whether these factors will lead to important changes in German politics depends on the course of the economy in the coming years.