“The six-country platform can be more inclusive” 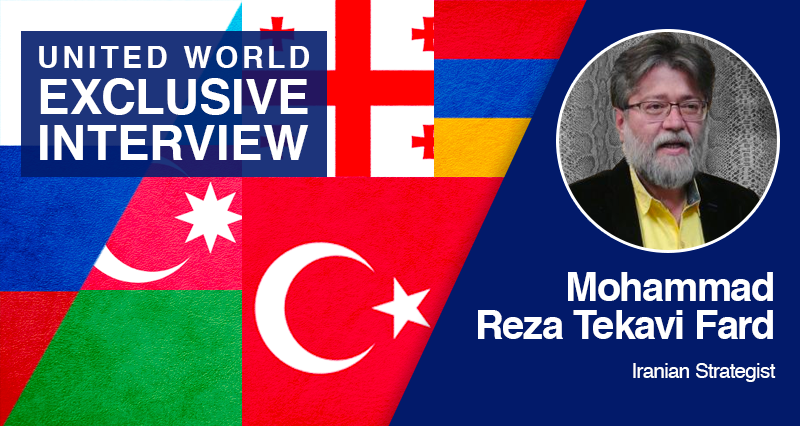 How were the US presidential elections results evaluated in Tehran? How will Washington-Tehran relations develop during the Biden administration? What will the six-country platform bring for the region? The Iranian strategist Mohammad Reza Tekavi Fard answered our questions.

Fard has said that regional co-operation has achieved tangible success on issues such as the Barzani’s independence referendum and in Astana, adding: “This call for a six-country platform will form the basis of an even more inclusive and a much greater union in the future.”

The Presidents of Turkey and Azerbaijan have called for a regional union in Baku, after the victory in Karabakh. After this call, the Iranian Foreign Minister visited Turkey, Russia, Azerbaijan, Georgia, and Armenia. What does Iran expect from the six-country alliance, and what does this cooperation mean for the region?

“Our region is extremely important and strategic in every aspect. The reliance and trust of the neighboring countries can be very important for the alliance and can lead to significant changes. Regional problems can be solved by people who have their common languages, cultures, and geographies. The actual goal of the foreign players in the region is to use the regional potentials for their own benefit. These potentials are not limited to the resources buried beneath the surface, but rather the resources actually present on the ground. There are some trials that have yielded in positive results in the region. When all the countries of the region had united, some referendums were unrecognized, and an ambiance like in Astana emerged. These are the steps that have been successfully realized to the benefit of the regional union, which means we have had successful trials.”

Regional diplomacy should focus on the region

“The impact on these relations is based on the will of all the peoples and countries in the region. In my opinion, foreign actors should play the least role in this system. I think that the countries in the region should focus on the will of their own people who seek peace, friendship, alliance, comradery, and companionship. For this reason, if the peoples of the region and the governments actually agree on these issues, that is, if the governments of the region shift their views closer to those of the peoples, the level of cooperation will definitely increase.

The current situation of the region is not good, and is not what that the people of the region wanted. The people want peace, friendship, and close ties. The capacities of the regional countries must be developed in this regard, and governments should take this very seriously. Foreign Ministers should focus on the region rather than outside of it. They should understand that, for close and strong relations, neighbors and allies who do not change sides must be focused both economically and politically. Regional cooperation is very important for a beginning that will put the countries of the region in a very important position strategically in the multipolar world order. This call for a six-country platform is very important and it will form the basis of an even more inclusive and a much greater union in the future.

“For Iran, it is not important who was elected”

Biden’s victory seems to have increased the expectations in Iran that the United States will revisit the Nuclear Deal. Is Iran satisfied with the election results?

“In my opinion, the US presidential election is more of an issue that concerns the American people themselves, rather than any other countries. The people of the United States are getting tired of the country’s political system. And that does not mean people despise Trump or really approve of Biden, since they had no other choice. They can only choose the blue or the red. This is another type of bipolar model. This has resulted in the political scandal in America around the elections, and the loss of America’s dominant image, which it had built for many years. I do not think it matters for Iran in any way who was elected.”

What do you think will change after the elections, do you expect a change in regional policies?

“As a matter of fact, American ‘freedom’ has begun to be questioned, and the identity of the American people has changed: they are a dynamic and active people. Therefore, we should not evaluate the American people and their government as a whole. In my opinion, it does not matter whether it is Obama, Clinton, Trump, or Biden serving as president of that country. The current policy of the United States, which ignores its own internal problems, takes action with the intention of dominating the world, attacks the peoples of the world with different excuses and allegations on their democracy, and punishes them, is wrong by its very nature.

It is imperialist ideology that is invalid in the current world. People are born equal, and everyone has the right to live on this earth. I think the events that took place in the United States after the election will also affect the level of cooperation between the US and Europe… but I do not think there is going to be any change in the way they view our region. The US is in a struggle for the world’s resources via a hegemonic policy. The US sees itself as the owner of the entire world, despite all the internal problems they face, and they think they should intervene wherever they want. But all presidents do it differently. For example, Trump had a view of withdrawing from the agreements, while Biden has the view of returning back to the agreements. But they all have a hegemonic view regardless. Neither approach is humane, and all of this was done to prevail over the countries they are interacting with. I think that the impact of changing US-European relations will only increase issues in the region. Therefore, the region should pursue its own interests and benefits. We should perceive the problems that were brought by the US election in a different way, and not allow them to damage our nations’ values or the region as a whole.”