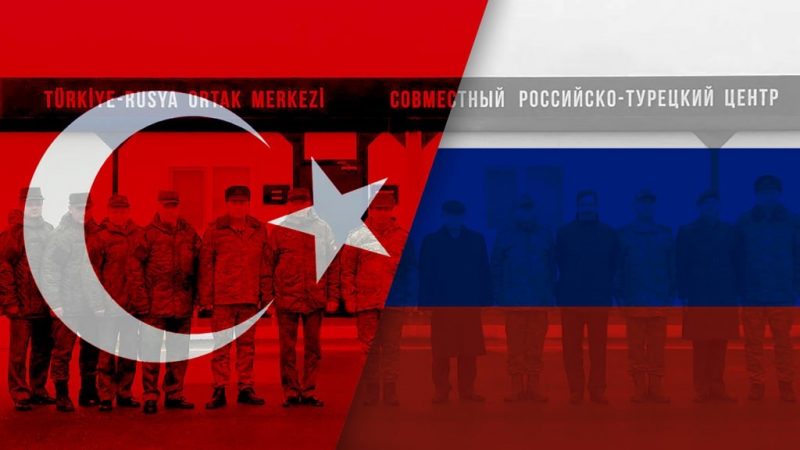 The Turkish-Russian Joint Monitoring Center, established within the scope of monitoring the ceasefire in Nagorno-Karabakh, began work on January 30.

End of the Minsk Group era

The establishment of the Monitoring Center points to the beginning of a new era in the South Caucasus and the Karabakh issue. This period puts an end to the Minsk Group process, which had accomplished nothing in the course of 30 years.

With this development, the intervention attempts of extra-regional powers were thwarted. In turn, regional initiatives triumphed. All efforts to sabotage their relationship between Turkey and Russia over the Karabakh issue crashed and burned.

Peace and tranquility are entrusted to the regional forces

The opening of the Turkish-Russian Joint Monitoring Center is a sign that only the countries of the region will now determine the fate of the region. Foreign powers have no right to speak on the topic.

The security of the region has been entrusted to the local forces, something that could only be provided by Turkey and Russia, for whom peace in the South Caucasus is in their best interests.

It has been clearly seen over the last 30 years of the Minsk Group that foreign powers will never work for the stability, prosperity, security and peace of the region. Justice can not be expected from the West, only chaos and occupation.

After the War of Independence of Azerbaijan, the Turkish-Russian Joint Monitoring Center is one of the most important pieces of evidence that this process has turned upside down.

The Turkish and Russian Armies have experience in working together on this basis. The ongoing Astana Process in Syria and the joint patrols of the soldiers of the two countries have achieved significant success. Therefore, there is no doubt that Turkish and Russian soldiers will fulfill their duty in Karabakh harmoniously and in the best way possible.

This cooperation will not only provide security and stability in the region, it will also serve regional integration. On the other hand, it offers Armenia the opportunity to learn from its past mistakes and to live in harmony with its neighbors.

In this sense, two important developments have taken place:

First, the Railway network project in the South Caucasus. Turkey and Nakhichevan will be linked to Azerbaijan over Armenia; on the other hand, Armenia will be linked to Russia and Iran through Azerbaijani territory. Thus, Turkish and Russian railways will also be linked.

This project is valuable in numerous ways. Transportation, trade, economy, the cohesion of societies… It should be noted that this will not be limited to the South Caucasus and will act as a bridge from China to Europe.

Secondly, we have the six-party platform proposed for the region by Turkish and Azerbaijani Presidents, Aliyev and Erdogan. The platform is now discussed as “3 + 3”, i.e., “Turkey, Russia, Iran” and “Azerbaijan, Georgia, Armenia”.

Imperialist-chauvinist policies must be abandoned

It is definitely not in Armenia’s interest to stay out of these initiatives. If Armenia abandons its revanchist and chauvinist policies and realizes that it is not beneficial for anyone to be a tool for the regional plans of the foreign powers, and of course, if it fulfills its obligations to Azerbaijan, the country has great opportunities ahead.

This process of rapprochement will be reinforced with the opening of the borders. Armenia will be able to overcome the political and social crises, especially the economic crisis, by living in peace with its neighbors.

The States imposed the Armenian initiative on Turkey before the liberation of Karabakh. The goal was to detach Armenia from Russia and link it to Washington through a US-led Turkey. To achieve this, Turkey was supposed to compromise on everything. Neither the recognition of the Karabakh nor the Kars Treaty were discussed in secret negotiations in Switzerland.

The Armenian initiative was about betraying the interests of both Azerbaijan and Turkey as well as the region as a whole.

Now the situation has changed. Nagorno-Karabakh and the occupied territories have been liberated. Once again, Armenia has been defeated playing in its role in imperialist plans. The giant mirror the country looked into was broken, the poplar winds blowing on their heads ended, and Armenia faced the facts. In short; Yerevan has to learn its lessons from the past. There is no perfect time like the present for the “Armenian initiative”.

The two developments mentioned above are important signs of this.

The end of provocations

The US and France will of course want to spoil this process. Those who attempted to establish an artificial “friendship” between Turkey and Armenia when Nagorno-Karabakh was under Armenia’s occupation will try to keep Armenia away from developing regional initiatives.

It is necessary to pay attention to these provocations. On the one hand, the revival of ASALA and similar terrorist organizations is on the agenda. The Atlantic centers are meant to threaten Turkey in every respect with the assassinations and terrorist acts by those organizations; however, additionally, they will aim to prevent Turkey, Azerbaijan and Armenia from coming together.

It is important for not only Turkey, but also all other states operating in the South Caucasus, to be vigilant against such provocations.