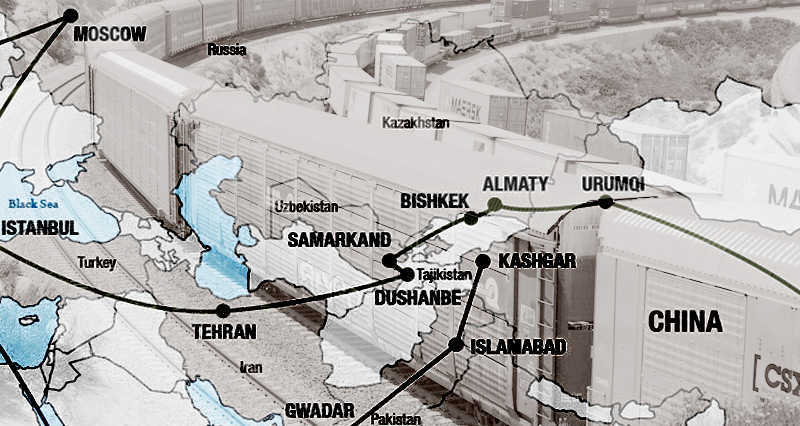 For days, there has been a discussion about whether an export train headed towards China will actually arrive at its destination. There is a motivation for all this chatter. The empty noise was further evidence of the fact that ‘the choir of opposition’, also called ‘the Biden crew’ by Mr. Doğu Perinçek, is building opposition to Turkey.

Turkey’s increasing exports to China via railroad is something that would be good news to any ordinary Turkish citizen. If any trouble occurs on this front, any patriotic person would expect and hope it will be remedied. However, members of the parliament who have tied all their hopes to the US, journalists paid by US funds and the remnants of FETÖ and PKK in Turkey rejoice whenever Turkey hits a bump on its way.

As this article is being written, the train draws closer to its target, having left the port of Baku and crossing the Caspian Sea. They chatter, but the train rolls on!

THE WAGONS WERE HAULED

Sadly, all issues related to China in Turkey lead to such irrational contention nearly every time. The vaccine issue is exactly the same, but let’s leave that matter to another article for now.

What is striking is the fact that so-called “crypto nationalists” are taking the lead in anti-Chinese activities. For example, in his article titled ‘Is One Belt One Road China’s Imperial Project?’ first published in Veryansın TV and then on Mehmet Eymür’s ‘Özelbüro İstihbarat’, Retired Colonel Osman Başıbüyük writes: ‘China’s goods will set out from Kars and leave the country from Edirne without any question, our part will just be to watch the train.’ (1) His reasoning was that Turkey cannot gain an economic benefit from a railway between China and Europe through its borders, since no goods will be loaded on that train by Turkey. Nevertheless, the train that made so much fuss is full of Turkish goods. Our export train to China, departing from Çerkezköy, carries 42 containers of white goods to Xian, the starting point of the “Silk Road”.

ANNOUNCEMENT OF THE END OF THE OZAL ERA

The issue is not limited to our export train. The railway revolution is taking place throughout Eurasia today. We cannot close our eyes to this.

The person responsible for Turkey’s economic disaster that we have been experiencing, Turgut Özal, went down in history with his words uttered as Prime Minister in 1984: ‘The railroad is the choice of communist countries’.

However, the most important means of transportation in Asia is trains. The COVID-19 outbreak hit the transportation industry across the world. Airlines and shipping companies went bankrupt, ports and sea lines were in trouble, everything except railroad transportation!

In 2020, the volume of China-Europe Rail Transport has doubled. The China-Europe wagon trains, which were launched in the city of Chongqing in southwestern China in 2011 as a regular service, doubled their number of travels as supply chains preferred rail instead of air and road due to the COVID-19 outbreak. Railroad transportation in Eurasia became an important and developing part of the Belt and Road Initiative proposed by President Xi Jinping in 2013.

China-Europe wagon trains passing through Xi’an, capital of northwest China’s Shaanxi Province, made more than 3,400 trips in the first 11 months of this year. This figure was double of last year’s number. According to Sun Yimin, executive committee director of Xi’an International Trade & Logistics Park, Xi’an runs 10 daily trips for the China-Europe wagon train. At the end of this year, it is estimated that there will be 3,600 trips a day.

Xi’an launched its first Sino-European wagon train in 2013. There are currently 15 routes connecting Xi’an to Asia and Europe, covering 45 countries and regions along the Belt and Road. (2)

THE WAY TO INCREASE EXPORTS TO CHINA

Outbound trains carry goods such as daily necessities, medical devices, medical supplies and other vehicles, while inbound trains carry milk powder, wine and automobile parts. As a result, it imports more from the EU countries with which China has signed a Belt and Road cooperation agreement than it exports to these countries. Eastern European countries became the countries with the highest rate of export to China after Central Asia. The European Union’s exports to China have doubled in the last decade. China’s imports from the EU are growing faster than its exports. (3)

Although Brussels complains about these trade figures, this is a healthy growth. Bilateral trade will develop further if European states stand to the pressure of the US and take a positive stance in the negotiations on the EU-China Comprehensive Agreement on Investment.

RAILROAD TRANSPORTATION IS FAILING IN THE EU

While railway transport in Eurasia peaked, railway transport across the EU came to a halt in the second quarter of the year due to the restrictive measures taken by 27 member countries against the coronavirus.

Railroad transportation dropped the steepest in Ireland, at 94% year-on-year, followed by Spain, Italy, France and Luxembourg, according to Eurostat. In all these four countries, the rate of decrease was 78%. The Netherlands alone reported a slight drop of 0.2%. Eastern European countries were in a better shape: Bulgaria 37%, Romania 47% and Czechia 48%. Turkey declined by 78% over the same period in railroad transportation. (3)

However, railroad transportation is more convenient in the face of pandemic, as it requires less manpower over long distances. It requires less contact at border crossings than road transport. Each wagon train can carry 40 to 70 times more cargo in a much safer environment. (4)

The United Nations-affiliated the Economic and Social Commission for Asia and Pacific (ESCAP) is working hard to improve rail transport in Eurasia. At the sixth meeting of ESCAP’s Trans-Asian Railway Network working group, it was decided to take steps to reduce border crossing delays along long-distance railway corridors:

RAILWAY AFTER THE OUTBREAK

Production moved inland as a result of the Chinese government’s strategy of “developing the western regions” and because of rising wages in the eastern coastal areas. This situation encouraged many customers to choose the railway for export. Railway transportation has become more attractive than sea transportation for places far from the ports.

Transporting valuable goods by rail over long distances as well as light in weight but heavy in value in freight reduces costs. Transporting high-value goods by sea requires capital to be tied for longer. This situation also increases the cost of transporters. Railway creates much less carbon emissions compared to airplanes and trucks.

Over the past year, the Chinese government introduced new technologies such as  the block-chain to increase the speed and efficiency of customs clearance and allow companies to save time in transferring containers.

The added value of new technologies, which increases efficiency and speed, has created an opportunity to increase revenue for railways. The financial ruin suffered by airlines means COVID-19 has entered a new era in rail transport.

A leap forward can also be expected in passenger transportation. It should not be surprising to introduce new routes for high speed trains.

When the first show train from China to Europe arrived in Hamburg on October 6, 2008, 17 days after leaving Xiangtan in Hunan Province, the result was seen as a joke by many. Currently, the route of more than 11,000 kilometers connects about 100 Chinese and European cities.

Railway wagon traffic from China to Europe has started to grow rapidly since 2011. The removal of customs clearance at the borders with Free Trade agreements resulted in a decrease in logistics costs and a sharp increase in the speed of delivery of goods between China and Europe.

The impressive growth continued in 2020. It seems that the total railway wagon traffic could easily exceed the historic threshold of one million TEU this year.

Just a few years ago, most of China-EU trade was done by sea, but the exponential growth of railway transportation makes it necessary to change this generalization. (6)

THE INCREASING IMPORTANCE OF KHORGOS

There is a center in Eurasia that must be mentioned in railway transportation: Khorgos on the China-Kazakhstan border. It is the largest land port in the world. The dry harbor furthest from the seas. It is connected to the city of Xinjiang in the Uyghur Autonomous Region. Free Trade Zone in the heart of Asia. Khorgos is the heart of the world since Eurasia is the “heartland” geostrategically.

In conjunction with digital cargo management software, the dry port’s expanded facilities have reduced the previously needed time for cargo transfers on the China-Kazakhstan border by more than half, making rail transport an increasingly competitive transport channel across Eurasia.

Seamless rail connections across Eurasia were not possible due to a small difference in rail track spans. From the mid-nineteenth century the dimensions of shipping containers were standardized, while Russian and later Soviet railways were built with a rail span of 1,524 millimeters, 0.089 millimeters wider than the standard used on both European and Chinese railways. Due to this incompatibility, cargo must be transferred from wagons operating on Chinese railway lines at the border to those used on Central Asian and Russian railway lines.

CONCLUSION: RAILROAD IS THE PATH OF CIVILIZATION

The first city in the world with all-electric public transport is in China: 16,000 city buses and 20,000 taxis in Shenzhen are all electrically operated. (7)

Now all the facts point to the following: contemporary civilization is rising in Asia! Turkey will reach the goals set by the great Atatürk and even surpass them; we are already on our way.