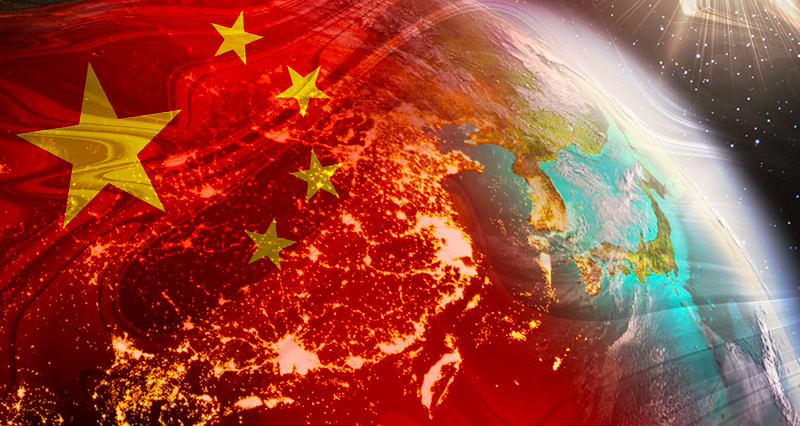 15 countries in the Asia-Pacific region have organized a free trade zone covering one third of the world economy. The Regional Comprehensive Economic Partnership (RCEP) agreement, as being the world’s largest trade agreement to date, was signed on November 15.

Take note that the world’s largest economic partnership has been created with the exclusion of the imperial powers of the Atlanticist Bloc – without the US, UK, France, or Germany in the agreement! The countries of the region, all formerly colonies and semi-colonies, are developing a cooperation model for the 21st century with this joint initiative.

THE ERA OF DOMINATION IS OVER

ASEAN, the backbone of RCEP, is an inter-state organization formed by 10 countries in Southeast Asia. These countries include Brunei, Indonesia, the Philippines, Cambodia, Laos, Malaysia, Myanmar, Thailand, Singapore, and Vietnam.

ASEAN’s history goes back to 1961, but it accelerated development after 1990 and started to expand in the 2000s. First, joint mechanisms were established with China, Japan and South Korea and three countries of East Asia under the name ASEAN + 3. Then, under the name ASEAN + 6, India, Australia and New Zealand joined the union. 15 countries with the exception of India finally signed on to the RCEP after negotiations dating back to 2013. An open door was left for India to join. The total population of the free trade zone amounts to two billion two hundred million people. The share of 15 countries in world trade is 28%, and their income is one third of the world total.

DIFFERENCES FROM THE EU AND NAFTA

There are two free trade zones and economic merger agreements close to the size of RCEP: the European Union (EU) and the North American Free Trade Agreement (NAFTA), both constituted on the initiative of the imperialist countries. At present, both organizations are experiencing serious internal turmoil. NAFTA is at a dead end, with Canada accusing the US of using it to colonize. The US is building a wall to close its border with Mexico despite the free trade agreement.

The European Union, which is a means for unification under common sovereignty, started to crack during the financial crisis in 2008, eventually leading to Britain exiting from the union. After the corona epidemic, member countries quarreled and closed their borders to each other.

The Trans-Pacific Partnership (TPP), which the US under Obama was determined to establish in order to maintain its hegemony in the Asia-Pacific region, fell through due to Trump’s reluctance to pursue it. It then downshifted, becoming the Comprehensive and Progressive Agreement for Trans-Pacific Partnership (CPTPP). It eventually became irrelevant after the foundation of the RCEP.

While the free trade unions formed by the Atlantic Camp to order the world were experiencing great difficulties, a more advanced model was established in the East under the leadership of China.

The RCEP’s legal text has 20 chapters, covering market access for trade in goods, trade in services and investment as well as rules for trade facilitation, intellectual property, e-commerce, competition policy and government procurement. (1)

The RCEP is a practical agreement with enough flexibility for its members to commit to different levels of market liberalization. The superiority of RCEP is that it is based on benefiting mutually from each country’s comparative advantages by accepting all countries as equal. With preferential trade agreements, it allows governments to protect sectors that are not ready for competition. RCEP embraces the most advanced stages to the least advanced and can be flexibly adapted to all of them.

More than 90% of the goods traded will be tariff-free under the agreement. There are customs tax exemptions for some goods and services. The RCEP is expected to benefit textile, apparel, and light industries the most. For an export-oriented industry such as textile and apparel, a unified free trade zone helps the local area to form a supply chain and value chain based on comparative advantages. It will be conducive to the flow of goods, technology, services, capitals, and cross-border movement of people.

A typical textile and apparel value chain is seen in how China imports wool from Australia and New Zealand, and then weaves it into fabric for export to Vietnam, Vietnam completes garment weaving and exports to Japan and South Korea.

As they step into a steady overseas capacity expansion early on, textile and apparel companies with global production capacity and customer connections are expected to give full play to their competitive advantages.

The RCEP covers almost all of the so-called “21st century trade rules”, including digital commerce, investment and intellectual property protection.

With this agreement, China is meant to strengthen commercial ties and technological cooperation with other Asian countries. The rapid development of cross-border e-commerce facilitates the global expansion of Chinese brands while breaking the original brand monopoly available in overseas markets.

THE REASON FOR RUSSIA’S ABSENCE

In a sense, Russia is an East Asian country. It neighbors China, Japan and South Korea. Questions are being asked in some quarters why Russia wasn’t included in the deal.

The simple answer is that Russia already has and is a member of its own Free Trade Area (FTA), being the lead nation of the Eurasian Economic Union (EAEU), which also includes Armenia, Belarus, Kazakhstan and Kyrgyzstan. The Eurasian Economic Union is in an expansion effort. Russia would need to bring its other four partners to join the RCEP agreement. In fact, they are remote by comparison and disconnected from all the other RCEP partners. That is not to say however that Armenia, Belarus, Kazakhstan and Kyrgyzstan will remain apart from South-East Asia – the EAEU has signed its own FTA with ASEAN members Vietnam and Singapore, while FTA with other ASEAN members such as Cambodia, Thailand and Indonesia are all looking increasingly likely in the future. The future for potential trade development and investment between Russia and ASEAN is promising – bilateral trade between Russia and Vietnam has now reached $10 billion per annum from virtually zero in just four years. Given that most, if not all, ASEAN members are interested, trade between Russia and South-East Asia is going to become a significant trade corridor within a decade.

The Eurasian Economic Union also has a Free Trade Agreement with China. It is predicted that the trade between the parties will greatly leap forward when some of the problems are eliminated. For example, it is estimated that Russia’s trade with China will double by 2024 to reach $200 billion.

Although Russia has not joined the RCEP, many cooperation channels are being established to enable Russia and the EAEU to access Southeast Asia. (2)

Why did India pull out of RCEP, and what are its alternatives?

The main motive for India was that it did not want China to gain access to its local markets: Indian companies are afraid of Chinese competition. China is far more disciplined than India, more insightful in international cooperation, and has better technologies and skills. India’s way of dealing with this is simply to close the door. However, the most valid way to compete with China is to establish preferential partnerships with it.

India stands now at a crossroads. Either it will assume a pioneering position in rising Asia, or it will shrink and be excluded from the developing civilization because of its narrow nationalist view.

ASIA IS PROMOTING AFRICA TOO

Across the Indian Ocean lies Africa, whose own African Continental Free Trade Agreement is shortly to kick in and reduces intra-African tariffs to zero on 95% of all traded products. Africa is a massive continent, and the countries at its heart specialize in a diverse range of industries. Free trade zones are springing up all over the African coastlines, and in the interior, offer global manufacturers the ability to source in Asia, Africa, and the Middle East and finish products for export.

Africa could replace India as a global production hub, and India may miss out on taking advantage of the existing hidden workforce. (3)

The US’ spokespersons mocked the RCEP in 2013 saying it would last only a few decades at most and not yield any good results, and tried to force the countries of the region to join the TPP. China, on the other hand, has patiently worked towards the maturation of RCEP. At the 27th Asia-Pacific Economic Cooperation (APEC) Economic Leaders’ Meeting on November 20, “China welcomes the signing of the Regional Comprehensive Economic Partnership (RCEP), and will favorably consider joining the Comprehensive and Progressive Agreement for Trans-Pacific Partnership (CPTPP),” Chinese President Xi Jinping said. (4)

China’s Commerce Minister Zhong Shan published a signed article in the People’s Daily newspaper on November 24, in which he said that “China will step up efforts to expand the free trade area network across the world to enlarge its ‘circle of friends’.” (5)

After signing the Regional Comprehensive Economic Partnership (RCEP), China will see the China-Cambodia free trade agreement take effect at an early date and accelerate investment treaty negotiations with the European Union, Zhong stated in the article.

With the RCEP reaching a higher level in fields including customs procedures and trade facilitation, intellectual property protection, e-commerce and trade remedies, China will actively engage in dialogue and communication with more major economies and regional trade mechanisms, he wrote.

“It is a milestone in China’s pursuit of opening-up,” Zhong said, adding that the trade pact is expected to forge a new round of high-level opening-up in China against the backdrop of a global economic recession triggered by COVID-19 and mounting external uncertainty.

The RCEP would be an important platform for China’s “double circulation development” strategy, he also stated. According to Zhong, the large regional market, fueled by the implementation of RCEP, will provide opportunities for businesses of all countries to develop themselves, increase the connectivity of the global market with China’s domestic market, and enable the country to integrate more efficiently with global industry, supply and value chains.

The RCEP doesn’t only belong to its 15 signatory countries, it’s also open and inclusive, and more countries are welcome to participate, Chinese Premier Li Keqiang said at the fifth “1+6” Roundtable with several heads of major international economic organizations including the World Bank, the International Monetary Fund and the WTO on November 24.

Chinese Premier Li Keqiang stated that it’s not only an achievement of landmark significance in East Asian regional cooperation, but also a victory of multilateralism and free trade. (6)

Let the Atlantic media and the Atlanticists among us keep screaming, “Biden is here, the US will make the world order.” It’s no use closing the stable door after the horse has bolted! Multipolarity, which has already limited US hegemony, has risen to a new stage with the RCEP.

On March 27, 1933, Atatürk put forward a remarkable prediction for the future, emphasizing that he spoke “not as a President but as a member of the Turkish nation”:

“I can see the awakening of all the eastern nations from afar, as I see the daybreaking now. There are many more brother/sister nations that will achieve their independence and freedom. Despite all the difficulties and obstacles, these nations will overcome everything and attain the beautiful future that awaits them. Colonialism and imperialism will disappear in the world and a new era of harmony and cooperation will replace their place, which does not discriminate against any color, religion or race.” (7)