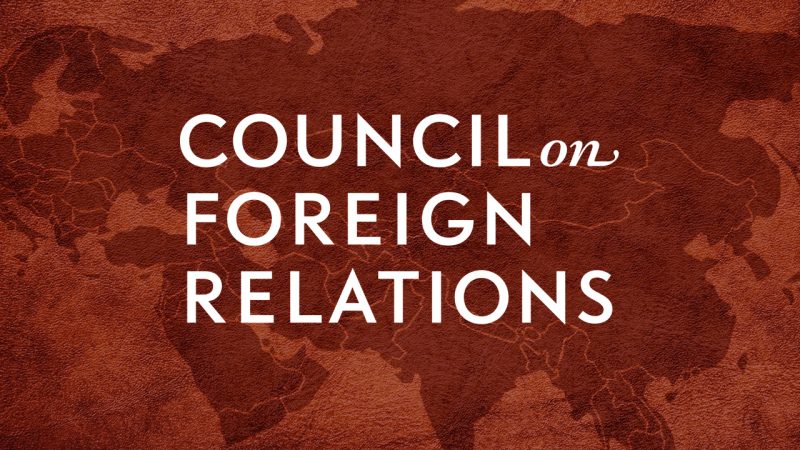 The highly influential US Think Tank Council on Foreign Relations (CFR) has published its Preventive Priorities Survey 2021. The report foresees US intervention against Eurasia both in direct military conflict between Washington and Eurasian countries as well as within inner-Eurasian conflicts. The strengthening Eurasian collective defense and conflict solving mechanisms as well as further deepening Eurasian economic integration becomes vital to protect intercontinental and global peace.

The Council on Foreign Relations is considered to be one of the most influential Think Tanks concerning US Foreign Policy. It’s even better informed than the coming US President:

“Until the novel coronavirus pandemic recedes, the Joe Biden administration will certainly not want to be distracted with an unexpected foreign crisis. The world, however, is rarely so accommodating”. (All following quotes are taken from the Survey.)

Joe Biden is one of the “busy policymakers with limited bandwidth”, because he’s “managing the present”, but the CFR “focuses on the future”.

STARTING WITH AN IMPERIALISTIC LIE

Starting point of the survey is an imperialistic lie: The “unaccommodating world” produces “contingencies which pose threats to U.S. interests”, which might cause that the “U.S. military force could plausibly employed”.

Of course the truth is the other way round: The U.S. considers the whole world its sphere of influence, advances its interests globally, and when it encounters resistance, it considers deploying military force.

For instance, “increased fighting between Ukraine and Russia” is not a contingency threatening US interest, but a consequence of militarily pursued US interests itself. The “contingency” builds upon the process where the US has supported a coup d’état in the Ukraine, opened the way to the country’s NATO membership, debt-financed the Ukrainian government and strengthened its military. It is the Russian resistance to this process that appears as a contingency and a threat, possibly to be answered by US military deployment.

In summary, the CFR survey must be read as an indication where the US advances interests, where it encounters resistance and where it considers deploying military.

In other words, those who pursue U.S. foreign policy and those who accompany it, critically evaluated world politics according to U.S. interests – with a focus on possible “U.S. military deployment”. And here’s their result:

The continent of Eurasia is the focus of U.S. interests, and a field of huge resistance, making U.S. military deployment possibly necessary in various aspects.

All “contingencies” of high/moderate likelihood and high/moderate impact on U.S. interests (in the survey the “Tier I”) are located in Eurasia, except for Venezuela.

All contingencies with a moderate likelihood and impact are also located in Eurasia, as well as one with a low likelihood but high impact, except for Mexico (“Tier II”).

Tier III contingencies, that is conflicts that have a low impact on U.S. politics and are moderately likely to escalate in a manner to involve U.S. military are all located in Africa except for Myanmar and the Armenia – Azerbaijan conflict.

550 U.S. government officials, foreign policy experts and academics have responded the survey. They consider likely an “armed confrontation” between the U.S. and Iran, due the country’s “involvement in regional conflicts and support of militant groups”. Being part of a CFR-Report based on government officials’ answers, this of course is not only a statement but also a threat.

China may be the target of a “severe crisis” with the U.S. due to its “intensifying political and economic pressure against Taiwan”. The U.S. just recently has decided to elevate its relations to Taiwan. And, though less likely than considered last year, an “armed confrontation” between the U.S. and China in the South China Sea over freedom of navigation and disputed territorial claims” is considered as well.

Russia may be targeted because of its “interference or intimidation against a member of NATO”, where of course it is the U.S. to decide upon the existence of ‘intimidation or interference’ and to lead the according answer.

Government officials and foreign policy experts added “a growing risk of confrontation in the Arctic between U.S. and Russia over territory, maritime routes or access to natural resources”.

And last but not least, Democratic People’s Republic of Korea’s “further development of nuclear weapons”, considered highly likely and having a high impact, will raise “military tensions” on the Koran Peninsula with U.S. participation.

The cases above foresee a direct U.S. military involvement as part of a conflict. The CFR Survey names several cases more, where the U.S. is supposed to react to a regional conflict, masking that it has played an important role in their escalation.

The Syrian government’s attempt of “violent reimposition of control” may lead U.S. conflict with “external parties”, including Russia, Iran or Turkey.

Heightened tensions between Ukraine and Russia, “increasing Russian interference in Belarus”, tensions between Israelis and Palestinians, Turkey and Kurdish armed groups, Greece and Turkey over claims on the Eastern Mediterranean, India and Pakistan over Kashmir, or a “military confrontation between India and China” may all make deployment of U.S. military necessary.

Those who answered the survey have added to the CFR-proposed list “armed conflict between China and Japan in the East China Sea”.

Additionally to these seemingly bilateral, but actually U.S. fuelled and partly escalated conflicts, several crises within countries are considered to be cases for possible U.S. military deployment.

INTERNAL INSTABILITIES IN COUNTRIES THAT CALL FOR U.S. INTERVENTION

Increasing political instabilities in Afghanistan and Venezuela, “deterioration of humanitarian situation in Yemen” and “renewal of civil war in Lebanon” are cases that affect U.S. interests and call for possible U.S. military deployment.

Suggested by the participants of the survey and published by the CFR are additionally “political instability in the European Union” and “internal instability in Saudi Arabia” and the violent crackdown of public protests in Hong Kong by Chinese military forces “potential crises that warrant (U.S. military) attention.

According to the survey, the U.S. has limited interest in a range of conflicts that are moderately likely to escalate, that is, involve U.S. military. Most of these cases involve African countries, including Libya, Somalia, Nigeria and the conflict between Egypt, Ethiopia and Sudan. Myanmar and the conflict between Armenia and Azerbaijan, prone “to a military conflict that destabilizes the wider region” are further cases taken into consideration.

U.S. military intervention may be the response to several internal crises in various countries including Afghanistan, Lebanon, Yemen, Saudi Arabia several African countries and, last but not least, the European Union.

The questioned ones easily name countries, which are published by the CFR in categories of “likely”, “moderately” or “low” likely. The survey than paints world’s countries in red, brown or yellow, according to impacted U.S. interests and possible military deployment.

The maps all display clearly that Eurasia has got into the focus of U.S. policy and military consideration, from his center of China and Russia to its edges in Turkey, Iran, Syria and the European Union.

This obvious aggressive U.S. policy makes a Eurasian answer more necessary than ever. The strengthening of the Shanghai Cooperation Organization as an institution of collective dispute solution, and the deepening of Eurasian Economic Cooperation becomes a vital answer to U.S policies of aggression against and provocation within Eurasia.