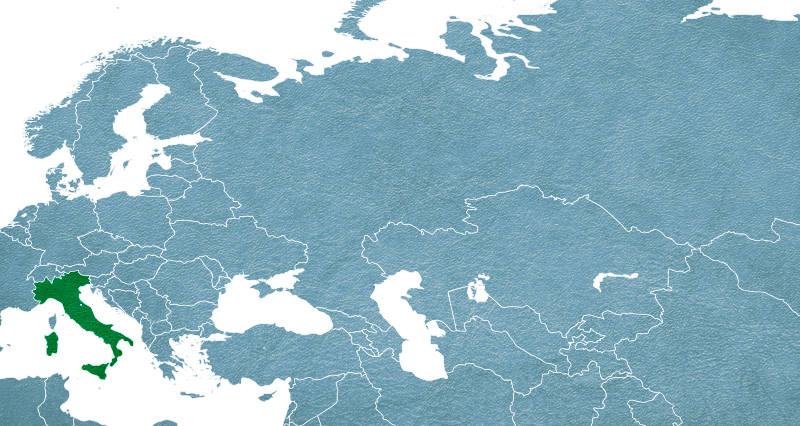 Italy is a country cornered between two types of imperialism, the main one is American imperialism, which uses its military presence, occupying the country with several NATO bases. Not a leaf moves in Rome without Washington’s approval. The second one is the European Union’s imperialism: although it is subordinated to the US and NATO, it exerts a further nefarious influence on the Italian peninsula. Particularly, from an economic-financial point of view, the notorious external budget constraint and the euro issue represent a real condemnation of eternal austerity for Italy.

Rome is actually imprisoned by the action of these two imperialist forces, and needs to turn its gaze eastwards towards Eurasia to free itself from this infernal grip. In particular, it can receive assistance from the two bastions of the new multipolar order: China and Russia.

Imperialism is working to keep Italy away from Eurasia

The combined action of the US NATO and EU aim to detach Italy from the multipolar Eurasian powers to keep it trapped in its current condition. In fact, because of an inept ruling class, many imposed measures have heavily penalized Italy in countless ways.

Sanctions against Russia are clearly an example of this, as these measures paradoxically affect Italy almost more than Russia itself. Many Italian companies have ended up in financial dire straits as a result. As the Italian ambassador in Russia, Pasquale Terracciano explained to the newspaper Il Sole 24 Ore, Italian exports to Russia before the 2013 sanctions, “were close to 15 billion dollars but, immediately after the adoption of the sanctions, we dropped to 7 billion now back to 11 billion (2019)”. The Russian counter-sanctions hit Italian products to the tune of 250 million fewer exports every year. The situation particularly penalizes Italy compared to other European countries. As indicated by Ambassador Terracciano: “The sanctions weigh much more on Italy than on other countries that have significant volumes of trade with Russia such as Germany.”

The same scenario was taking place in relation to the Islamic Republic of Iran. In 2011, the volume of Italy-Iran trade had reached the remarkable sum of $7 billion. However, in 2013, this volume collapsed to $1.3 billion because in 2012, the sanctions imposed by the ‘international community’ – a euphemism for the US and its vassal countries – had been launched against Tehran over their nuclear program. Meanwhile, France and Germany, especially the latter – were working hard to replace Italy.

Furthermore, the same pattern repeats itself with China. Whenever Italy seeks a rapprochement with Beijing in any field, the combined action of media and political actors sets the country apart from China. The US and NATO are very afraid of a concrete Italian approach to Eurasia. On issues such as 5G, Huawei and the memorandum signed between Italy and China for the New Silk Road, we have seen the worst of the Atlanticist’s forces unleashed in response. They use the usual arsenal of threats and fake news, ignoring the concepts that they normally fill their mouths with such as democracy and national interest.

Nonetheless, the Atlanticists’ maneuvers do not seem to have had the desired effect. In an article published last October in l’AntiDiplomatico the economist Pasquale Cicalese wrote about Italian exports: “But if we look at the September data, we notice the rebound of the USA (+11%), Latin America (+16%), but the extraordinary number comes from China, + 33% annually. In May, we were warned that political commissars at Chinese companies advised importing Italian goods to support its economy. Already in July, the figure was sensational, +24%. The Silk Road is an industrial, economic, financial reality, but not a political one due to Euro-Atlantic pressures. Nevertheless, China goes on, honors the Memorandum and does not care about the media, politicians and the Italian intelligentsia. However, we try to see the other side of the Moon; we record these data for future memory. Thanks China!”

Who are our real ‘friends’ or allies?

Around March 2020, Italy found itself submerged by the so-called first wave of the pandemic caused by the new coronavirus. Healthcare has completely collapsed and as a result, we have seen a very high level of mortality, objectively exaggerated compared to other countries. However, why has the response of a health system which for 10-15 years had been considered to be at the forefront of health care been so catastrophic? Rome certainly cannot cry to heaven against a cynical and cheating destiny. This is the result of draconian cuts to the Italian health system to comply with the absurd impositions dictated by neoliberal austerity and imposed by Brussels.

In this scenario, Italy’s alleged allies have revealed themselves for what they really are: enemies. In Rome, even basic personal protective equipment, such as gloves and masks was scarce; even so, what was Germany’s reaction? To block exports to Italy.

Diagnostic tests were also in short supply in Italy. So, what happened? The US buys half a million kits produced by a Brescia company – one of the epicenters of the first Covid emergency – and transfers them by plane to Memphis on a military flight. The newspaper Repubblica wrote: “On Wednesday America celebrated the arrival of a load of tampons, precisely half a million pieces. An impressive supply: just over 100,000 made it in our country since the beginning of the epidemic. That medical material landed in the US from the American base in Aviano, not far from Pordenone. In effect, in Italy there was a colossal reserve of diagnostic tests, available a few tens of kilometers from the epicenter of Covid-19: tools that our regions were looking for in every way to stem the spread of the disease but which they cannot find.”

To understand clearly, what happened, let’s recall what the British newspaper The Guardian wrote: “The hospitals were overwhelmed. Italian doctors and nurses had run out of masks, gloves and aprons they needed to keep themselves safe, and doctors were forced to play God with the lives of critically ill due to an acute lack of ventilators”. Meanwhile, the country’s alleged allies from the European Union responded with a deafening silence.

How did the countries portrayed by a large part of the political class and by the mainstream media complex as dangerous enemies of Italy behave?

In mid-March, China, during the greatest period of Italy’s trouble, sent a group of expert virologists, who had already contributed to the fight against Covid-19 at home, with loads of masks, test kits and lung ventilators.

About 100 Russian military virologists and specialists from the Ministry of Defense in epidemiology, eight nursing brigades and equipment for diagnostics and disinfection arrived from Russia through 15 flights at the request of the Rome government. The Russian specialists will lend their fundamental work in Bergamo, in Lombardy, one of the cities most affected by the pandemic and then move to Piedmont as well.

Controversies against the Russian aid mission against Covid-19 sent to operate in some of the places where there were the most critical and lethal outbreaks of the epidemic in Italy came swiftly. Almost nothing was published about the aid received by Rome from the so-called allies, and if there was, it was extremely superficial. An issue completely hidden by the mainstream circuit which preferred to hide from public opinion the lack of help of the EU and NATO blocs in which Italy had integrated. The allies of NATO and the European Union were unable to help Italy fight the coronavirus epidemic and therefore tried to discredit Russia and China by accusing them of propaganda around the pandemic.

The future of Italy, Eurasia and the New Silk Road

The day before the memorandum of understanding between China and Italy for the New Silk Road was signed, President Xi Jinping said: “China and Italy are emblems of Eastern and Western civilization respectively. They have written some of the most important and significant chapters in the history of human civilization (…) Having reached the modern era, following in the footsteps left by their predecessors on the path of friendship, the bilateral relations between China and Italy have experienced many renewals that have always brought new opportunities. In 1970, the People’s Republic of China and the Italian Republic established diplomatic relations, and in 2020 we will celebrate their 50th anniversary. After the establishment of diplomatic relations, regardless of which storms affected the international scene, the two countries have been an example of mutually beneficial cooperation based on mutual trust and close cooperation between countries with social systems, cultural backgrounds and phases of different development. The traditional friendship between Italy and China is solid and has always managed to renew itself over the course of its long history, becoming a backbone for the rapid and stable development of bilateral relations (…). Looking back over the history of the last 50 years, it is evident that Sino-Italian relations have deep roots and have already achieved numerous results. Looking to the new era, Sino-Italian cooperation has a bright future and broad development prospects.”

According to Chinese president, it is clear that the New Silk Road project presents a possibility of breaking the cage in which Italy is currently locked up, depressed, humiliated and deprived of any residue of sovereignty. Through the Chinese project, Rome can break the disastrous submission to Atlanticist geopolitical interests.

The long-term strategic perspective for Italy now is to break with the US-led unipolar order to embrace the emerging multipolar order based on mutually beneficial cooperation between sovereign Russian-Chinese-Eurasian states.

One response to “Italy and Eurasia: a long-term strategic perspective”