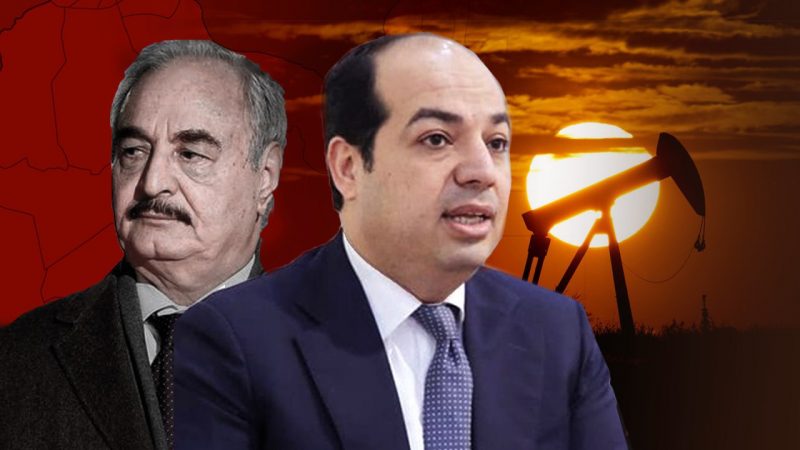 On September 18, Libyan National Army (LNA) Commander Khalifa Haftar announced the resumption of oil production and exports in Libya. The general, whose army controls the eastern and southern parts of the country, explained his decision by concern for the welfare of citizens.

Haftar stressed that a precondition for resuming Libyan oil exports after months of suspension was compliance with measures that guaranteed a fair distribution of revenues and their non-use to finance terrorism.

Almost at the same time as Haftar, Vice Chairman of the Presidential Council of Libya, which presides over the Government of National Accord, Ahmed Maiteeq issued a statement on the resumption of oil production.

According to the LNA command, an internal inter-Libyan dialogue has begun in Libya, with the participation Ahmed Maiteeq from the Tripoli’s side.

Export of Libyan oil was blocked by representatives of tribes of the east and south in January-February of this year. The UN recognized Government of National Accord of Libya (GNA), located in Tripoli, accused Haftar, on the territory controlled by which tribes blocked oil terminals and fields.

Haftar and his LNA support an alternative government in Tobruk, which bases its legitimacy on the support of the House of Representatives (HoR) and its Speaker, Aguila Saleh.

The LNA and the forces supporting the GNA are now in a state of civil war. LNA is supported by the France, UAE and Saudi Arabia. GNA – by Turkey, Qatar and Italy. Americans are contacting both sides as well as Russia, while Moscow is blamed by Washington in the indirect military support of Haftar’s forces.

Over the past month, however, a number of foreign actors, primarily Turkey and Russia, but also the U.S., have engaged in various peaceful initiatives.

The agreement announced by Haftar and Ahmed Maiteeq can be called historic one. Earlier, despite all the pressure from outside, it was not possible to resume oil production.

Now, as a result of the agreement, the National Oil Corporation of Libya (NOC) announced on Saturday night that the status of ‘force majeure’ had been removed from the “safe” fields and ports, but so far remains in areas and ports where it is believed that armed men hinder production.

Libya’s economy is entirely based on oil production. Oil is the main source of income. According to the NOC as of September 15, budget losses as a result of stoppage of oil production in Libya reached $ 9.8 billion.

The resumption of production means the return of these revenues, provided they are distributed fairly.

The fact is that only the national oil company – NOC – can sell Libyan oil. The revenues through the Central Bank of Libya were distributed among the institutions of all parts of the country, regardless of what military unit or government controls this or that region.

However, in the east and south of Libya it has always been suspected that militia groups controlling Tripoli take the lion’s share of the income. Thus, the blocking of the field and terminals was not only an act of pressure on the GNA by Haftar. It was no less in line with the interests of the tribes and clans in eastern and southern Libya.

That is why, although there had been information about the negotiations on this issue before, it was difficult to achieve a solution: it was necessary to find a compromise between the positions of all actors involved, including business circles and local leaders, and not just key political actors.

Ahmed Maiteeq as the new main player in Libya?

On September 18 Maiteeq announced on his Twitter that a joint technical committee would manage the distribution of revenues from Libyan oil export.

The main functions of the joint technical committee will be to form a budget that is fair from both sides’ point of view and to oversee the implementation of agreed expenditures. The committee will perform its functions until a new unified government of Libya is elected.

De facto, this committee will create a stable channel of communication and coordination between the two governments in Libya, establishing a strong economic basis for unification of the country.

Zawiya military and municipal councils and local sheikhs supported the arrangements. The resumption of oil exports through that port in western Libya promises them direct benefits.

Ahmed Maiteeq – Libya’s former prime minister has always enjoyed the image of a determined and effective man with connections in business and abroad, seeking a diplomatic solution to the Libyan conflict.

Previously, he had been on more than one occasion with diplomatic missions in different parts of the world, from Washington to Moscow. During a visit to Moscow in June 2020, Maiteeq predicted a decrease in the intensity of the conflict, and it was realized. Despite belligerent rhetoric from both sides, there was no storming of Sirte or Al-Jufra Air Force Base.

Moreover, at the same time the opposing Libyan parties agreed to resume negotiations of the military committee (5+5) for a truce in accordance with the draft agreement submitted to the UN during the negotiations on February 23.

For talks with the LNA and government in Tobruk, Ahmed Maiteeq is the ideal figure. He is the deputy of Presidential Council, a highly respected official. At the same time, opponents cannot call him a militant leader or an Islamist.

Unlike the influential interior minister Fathi Bashagha or head of the Libyan state council Khaled al-Mishri, he is not plagued by accusations of war crimes or patronage of such crimes.

Not long ago, on the eve of the announcement of the beginning of oil export, the Minister of Foreign Affairs of the Republic of Turkey Mevlüt Çavuşoğlu held a productive meeting in Ankara on September 15 with  Ahmed Maiteeq. Turkish Defense Minister Hulusi Akar also held talks with Maiteeq on the visit.

Given the recent statements of the head of the GNA Fayez  al-Sarraj about his desire to resign, Ahmed Maiteeq could claim to replace him at the head of the GNA Maiteeq’s visit should be seen as an attempt to gain support for Ankara, which plays a crucial role in Libyan affairs.

The high level of negotiations may indicate that Maiteeq has received such support.

It is telling that the Turkish state media TRT World, quoting one of the experts, called Maiteeq “the next prime minister of Libya’s UN-recognized Tripoli government”.

Thus, Ahmed Maiteeq has a chance to become ‘the savior’ of Libya, turning the country to the path of peaceful settlement and prosperity, resolving the oil export crisis. His talks with Haftar are an excellent PR move, proving to the Libyan people and the world community his peace-making intentions.

Nevertheless, there were those who opposed the agreement signed by Ahmed Maiteeq and Haftar representatives.

“Ean Libya”, citing its own sources, reports that some U.S. officials are dissatisfied with the agreement signed by Ahmed Maiteeq and Khalifa Haftar on the resuming of Libyan oil production. Apparently, the negotiations were held in Russia, which is negatively perceived in the United States.

Bloomberg reports that Fayez al-Sarraj, rejected the agreement, which, according to his senior assistant, calls into question the restoration of production.

A senior warlord – Major General Osama al-Juwaili, the commander of the Western Military Zone, also spoke out against the agreement.

The readiness to take any decision of the Libyan government, but without participation of Khalifa Haftar, was expressed by the plenipotentiary minister of defense in the Government of National Accord Salah Eddine al-Namrush on September 20.

Mohamed Sowan, head of the Justice and Construction Party, the political wing of the Muslim Brotherhood in Libya, described the agreement to resume Libyan oil supplies as suspicious and absurd.

On September 18, a Twitter user reported that an armed group attacked the house of Ahmed Maiteeq in Misrata and demanded that he leave the city. The user also indicated that another armed group attempted to attack the Central Bank building in Tripoli.

According to LibyanNews, sheikhs and many civilians arrived in Sirte for the meeting of representatives of the country’s Eastern government and Tripoli authorities. However, the planned dialogue was allegedly disrupted by al-Mishri-controlled militia.

On August 21, the warring parties to the Libyan conflict issued statements on cessation of hostilities. The agreement calls for the elaboration of various conditions for preserving peace, including conditions for the transition period before elections, which are likely to take place in March 2021. It is assumed that a single government will be elected in Libya.

Under these conditions, serious internal political transformations are beginning in the eastern and western parts of Libya. On September 14, the government based in Tobruk resigned. Large-scale changes are expected in the GNA.

In many ways, resistance to Maiteeq deal from other actors in the GNA is due to their own ambitions and fear that if he succeeds, he will be the main and only candidate for the post of the country’s leader. However, along the way, they become puppets of the US, disinterested in strengthening both Russian and Turkish influence in the country.

The U.S. itself seeks to act as the saviors of Libya by initiating negotiations. Previously, the U.S. embassy had tried to negotiate with Haftar to resume oil exports, apparently in exchange for its support.

But now the U.S. is left with nothing.

It is unlikely that Ankara was not aware of the Maiteeq-Haftar agreement on oil, given that it was in constant contact with Maiteeq and was engaged in a military and diplomatic dialogue with Moscow on Libya.

At the same time, the strengthening of the U.S. role means a direct threat to Turkey’s interests and everything it has achieved in Libya.

JINSA calls for a Special Envoy for Eastern Mediterranean “to create a clear counterweight to Turkey’s growing obstruction of regional energy development.

“A special envoy must also end a decade of “leading from behind” on Libya, where Turkey and Russia appear to be establishing permanent beachheads and coordinating to shape the country’s future, despite being on opposing sides of the conflict. Among other priorities, U.S. should focus on limiting Ankara’s influence over the Tripoli government,” – Lt. Gen. Thomas Trask said.

Given the influence of the Israeli lobby on the policy of the current U.S. administration, any U.S. initiatives in the Libyan direction should cause concern to Ankara. The attempts to sabotage Mateeq’s oil deal will only strengthen the US, which interest in the Eastern Mediterranean are oppose to Turkish ones.