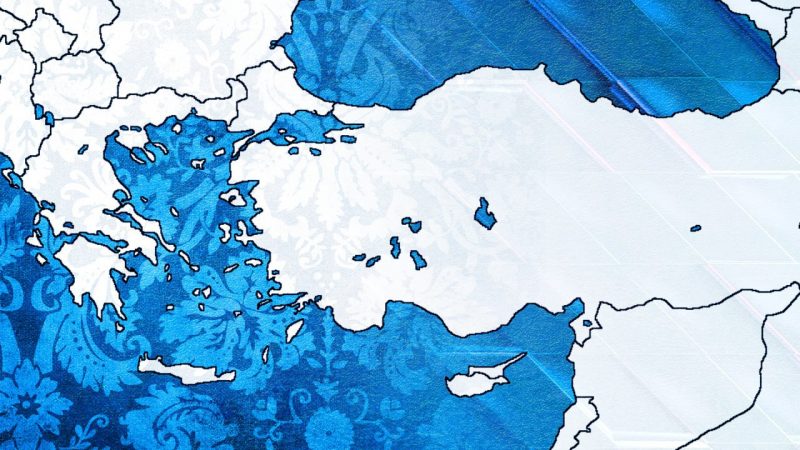 I learned of the Map of Seville from Professor Dr. Sertaç Hami Başeren, a faculty member at AU Political Sciences University and Advisor to the General Staff Maritime Law, in 2003. At that time, the Greek Cypriot Administration of Southern Cyprus (GCASC) had not yet declared an EEZ around the island. I was serving as the Head of the Strategy Department of the Turkish Naval Forces. In our short interview, Başeren mentioned that a US source had created a map containing the continental shelf / EEZ areas in the Aegean and the Mediterranean against Turkey, without yet calling it the Map of Seville. Later, in 2004, the map began to appear on EU websites. Later that same year the map was given its name.

The map’s first draft at the University of Seville

Juan Luis Suárez de Vivero and Juan Carlos Rodríguez Mateos, professors at the University of Seville in the department of human geography, published an article on October 4, 2004. In this article titled ‘Maritime Europe and EU Enlargement: A geopolitical Perspective’, a map in which Turkey is compressed within Anatolia was published for the first time. As a publication of “Elsevier”, a world-renowned information analytics business owned by British/Dutch, EU agencies and officials had already started to use this map by the time the article was ready to be printed in 2006. Neither faculty member was a maritime lawyer.

What motivated the creation of the map?

The preparation of the map was motivated by the simple fact that before its 2004 enlargement, the EU became invested in Maritime spatial planning. In other words, the EU countries with coasts wanted a plan that answered questions about the sea and the environment, such as where they would establish wind energy fields, fish farms, tourism development areas, central ports, shipyard areas and similar facilities, and which regions they would declare environmental protection areas in the future. The University of Seville, which is the most advanced in Europe in this regard, and Prof. Suarez, who is very famous in his department, was chosen. While working on this EU funded project, Suarez requested maps of future maritime jurisdictions from member states. Greece and Northern Cyprus sent them maps wherein they provided themselves the maximum share of territory leaving Turkey with next to nothing. These maps also coincided with American originated maps that had been on the internet since the early 2000s. The so-called jurisdictions of Greece in the Aegean Sea were already in line with the theses that they had been putting forward since the Continental Shelf crisis in 1976. However, this time, they presented an incredible maximalist thesis for the Mediterranean.

The European Union insists on the map

In 2007, the same map appeared in “Atlas of Maritime Europe: Jurisdictions, Uses and Management, Barcelona, (Ediciones del Serbal)”, which was published in Barcelona. This atlas was also an EU project supported by the Spanish National Research Council. The data bank used for marine space and borders in this map was developed by the British GEBCO data bank. Allegedly, the situation of the islands in the Mediterranean in this study was not considered with any legal basis in mind, and a bisector was used.

In early 2010, Suárez conducted another study in the Fisheries sub-area for the EU Directorate General for Internal Policy. In this study titled “Jurisdictional waters in the Mediterranean and Black Seas”, the continental shelf or EEZ areas that were not declared were not shown for the relevant countries. In the publication, it was clearly stated that the limit of territorial waters between Turkey and Greece was “theoretical”. This study was the last study conducted by Prof. Suárez over Mediterranean maritime jurisdictions. Briefly, Suárez was somewhat trapped by using the delimitation maps sent by Greece and Greek Cypriots in his study in 2004. He did not repeat this mistake in his study in 2010, but that ship had sailed.

The EU has used this malignant map everywhere for the past 16 years, and continues to do so everywhere, from official documents to websites. It seems that while preparing this map, the world’s hegemons decided to keep Turkey away from the sea, and the world tour of this map was achieved through Greece and the GCASC via serious psychological warfare and PR campaigns. They ensured that these maps would be prepared in a maximalist way in Greece despite reasonable maritime lawyers like Professor Rozakis. Turkey would either be persuaded to accept, or otherwise forced. If the FETÖ coup attempt had been successful, this map, no doubt, would already be imposed on Turkey.

The brazen and barefaced EU

During the Navtex crises of July 21st  and August 10th 2020, many statements were made on behalf of the EU Commission which declared that they had no relationship with the map known as the Map of the University of Seville, that such a map was not ordered by the University, and that the external reports prepared by the institutions were not official documents of the EU. No matter how one looks at the matter, this makes no sense. The EU is not a state and cannot declare a continental shelf or EEZ like sovereign states. However, the UN encouraged Greece and the GCASC to declare large areas to provide for their own interests and helped them in their political lobbying. On the other hand, as Bahçeşehir University BAUDEGS Founding President Admiral Cihat Yaycı stated: “How did the EU criticize Turkey for carrying out activities within the EEZ of the GCASC, and impose sanctions on shipmen in its former progress reports?” Meanwhile, the EZZ declared by the GCASC on April 2nd 2004 exactly overlaps with the Map of the University of Seville. In order to be convincing, the EU needs to explain why they started to use the map prepared at the University of Seville in all official documents and institutions since 2004, and why the map is still being used. EU websites identified by Admiral Yaycı are presented at the end of this article for detailed information and examples of the malign and wide-spread use of the map.

Will Turkey`s great victory against Greece be repeated 100 years later?

Diplomatic action must be taken

The Ministry of Foreign Affairs should request that the Presidency of the EU Commission remove this map and insist it be given no legal or moral validity from EU official sites and documents. The existence of this map shows that the EU cannot be trusted to serve as a mediator in the crisis with Greece.

We will not tolerate this map which imprisons Turkey within Anatolia and breaks its ties with the Mediterranean and Aegean Sea. Those who support the EU and the US are still defending the use of the map by arguing that nothing will actually be done with it must be made to understand that it will suffocate us all. Love for the EU and the US cannot save Anatolia from being cut off from the sea and snuffed out.