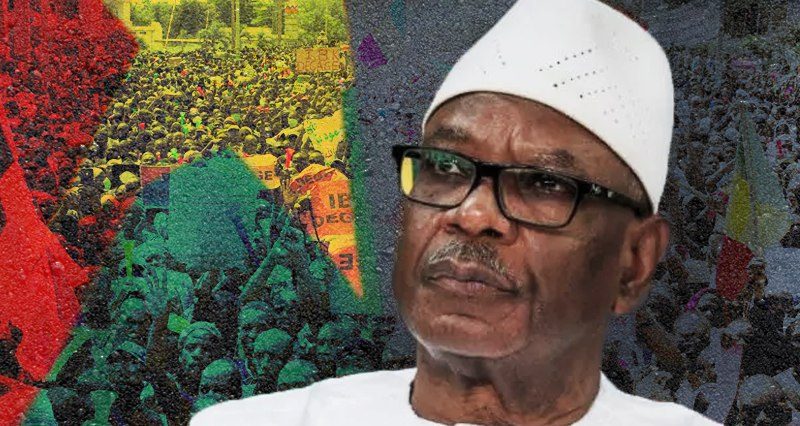 The last precedent of a military coup in Mali was in 2012 in Kati, where military personnel rebelled against an ineffective command that was unable to stop the swell of jihadists, after which France brought in troops. This time, the revolution was largely a reaction to France itself with its claims to influence in Africa …

The attempted military coup began with a shootout at a military base near Bamako on the morning of August 18, where rebel officers (the National Committee for the Salvation of People – CNSP) arrested the command and marched into the capital.

Colonel Major Ismaël Wagué, a spokesman for CNSP, announced that from Wednesday, all air and ground borders will be closed until further notice, and a national curfew will be imposed from 9:00 pm to 5:00 am local time.

“Our country, Mali, dark day by day in chaos, anarchy and insecurity through the fault of the men responsible for its destiny”, he said.

Other leaders of the uprising, according to media reports, are Colonels Malick Diaw, deputy commander of the Kati military camp, and General Sadio Camara. After capturing a military camp, they stormed the president’s residence, where the prime minister was located as well, and arrested both.

“If today some people from the armed forces have decided to end it by their intervention, do I have a choice? I should submit to it because I don’t want any blood to be shed”, Keita said on video declaring he`s resigning.

“The United States opposes any extra-constitutional change of government, whether by those on the streets or by the defense and security forces,” Peter Pham, the US’ special envoy to Africa’s Sahel region said.

In a press release published on Tuesday, August 18, the French Foreign Ministry expressed “concern” about the beginning of the “rebellion”, condemning with the greatest firmness this serious event.

Why Malians turned against Keita

It is not surprising that many Malians want to get rid of French influence in their country – some followed the influential imam Mahmoud Dicko, who heads the June 5 Movement, some even preferred to fall under the protectorate of local militants (from radical Islamists to tribal leaders). The protests in Mali have not stopped for several months, and the internal Malian opposition calls what happened not a coup, but a liberation and popular uprising.

At the request of the IBK president to step down, Imam Dicko maintained the same uncertainty he has always maintained since the crisis. According to him, the people themselves demanded the president’s departure. When asked by an RFI journalist about whether IBK will stay or leave, he replied that Mali’s problem is one of governance that needs a better answer than it has today.

When asked about a possible presidency in 2023, Diko replied in the negative:

“I’m an imam, that’s the best I can do. Inch’Allah! I will remain imam. I will not be a candidate for anything!”

Imam Dicko admits that he called for the resignation of Prime Minister Boubou Cissé. He still maintains this position. According to him, the current prime minister does not have the legitimacy that allows him to properly manage this crisis and find adequate answers.

Talking about the alleged divisions in the opposition alliance between the M5 and the Alliance of Patriotic Forces (M5-RFP), Imam Dicko responded that we are a group with ideas and we need time to agree. In such a group, people can freely express their opinions on a particular issue. It can’t seem like discord.

The RFI interview also raised the question of the future role of another influential religious figure in the country, Sheriff Nioro, who is tipped as a possible mediator in negotiations with ECOWAS. Dicko avoided answering, saying that such mediation was not discussed.

Imam Dicko also stressed that the Malian people are sovereign and will fight legally, with honor and dignity.

Before the August 11 demonstration, he criticized France for interfering in Malian politics, and when asked by RFI about this, he replied as follows:

“There are bad tongues who try to say that Dicko is someone who wants to do a theocratic thing, he wants to introduce Sharia law, he wants to flout the role of women. Since I am a Muslim, I speak Arabic or I interpret the Koran, that is enough to make me a rigorist, an anti-French, an anti-whoever? It does not make sense… I defend this youth who has now become easy prey for sellers of illusions. “

At the same time, he softened the rhetoric in this interview in relation to Paris, not saying either bad or good: he stressed that the problems in Mali were caused by internal factors, and not France.

“We did not consult France to choose IBK! We have chosen it, we, here, sovereignly. In any case, if France imposes it otherwise, I don’t know. France did not come to our mosques to tell us about IBK, it was we who campaigned! The corruption that is rampant in our country is not France, it is us! This bad governance is us! The fact of opposing the communities that are killing each other is us!”

It can be assumed that now Dicko is taking a pause and trying not to raise the topic of France – it is possible that representatives of the Republic are now establishing contact with him, trying to gain loyalty. To what degree they succeed is already on the conscience of the Imam.

According to the media, Wagué, one of the inspirers of the coup d’état, has already made contact with the West. At the very least, he promised to cooperate with citizens, as well as with international partners who strongly condemned the seizure of power – that is to say that now, Western countries are bargaining with the new leaders of Mali in an attempt to recruit them.

World leaders in the mainstream media emphasize that stability in West Africa is now at stake, and that a coup in Mali will further destabilize it. They remind that there are only a few months before the general elections in Côte d’Ivoire and Burkina Faso, and the situation in Mali increases the threat of terrorism, in addition to the risk of coronavirus, and could jeopardize the “democratic process.”

They argue that it is the forces of Western allies that are capable of deterring the jihadists. However, the experience of Operation Barkhan in recent years suggests the opposite: the situation has only worsened, and the number of mass terrorist attacks and attacks on checkpoints has increased to record levels. There was certainly no talk of democratic processes there.

The Berber factor in African geopolitics

France continues to actively participate in the affairs of its former colony of Mali decades after the country’s independence, and under various pretexts keeps its military forces there. The United States also has military advisers in Mali and its own forces. Nobody wants to withdraw their troops.

But it was precisely these countries that at one time provoked the wave of the “Arab spring” on the continent, which also affected Mali. The fact that they are trying to continue their neo-colonialist policies only suggests that the situation will further destabilize. If the leaders of Mali show willpower and act on behalf of the people, they abandon foreign intervention in internal affairs – then, most likely, they will face the fate of a “rogue country” that does not want to play by the rules of globalists. It is more likely (unfortunately) that they will find some kind of consensus with Paris and Washington – and then in a few years, we will see yet another coup, as the cycle of violence continues.