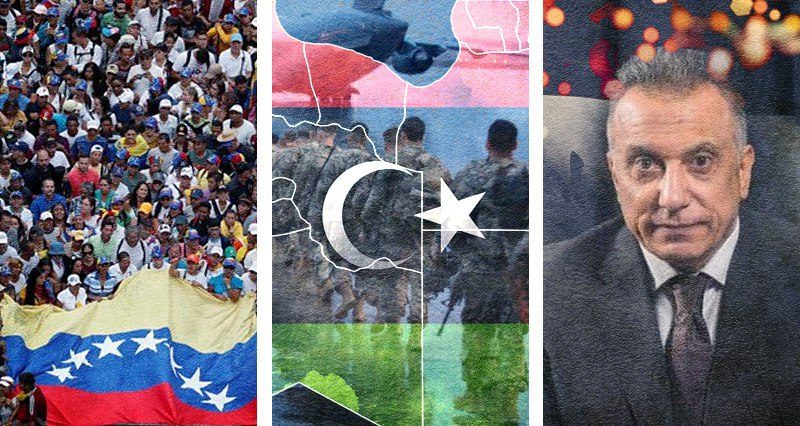 The Iraqi Parliament has given its support to the Cabinet of Prime Minister Mustafa al-Kazemi, thus ending an almost six-month political crisis. Only five candidates remained without a vote of confidence, including the new head of the Foreign Ministry. At the same time, al-Kazemi’s choice has already been approved by the US and Iran, which are actively fighting for influence in the republic.

Speaking to Parliament as the new Prime Minister, Al-Kazemi promised to earn the trust of the Iraqi people, together with the Government. He said he is grateful to the MPs for their support.

“I hope that all political forces will unite to face serious challenges. Iraq’s sovereignty, security, stability and prosperity are our path,” the prime minister added.

The major points of the political program of the new government is to organize the elections, to stabilize the economic situation in the country and to fight corruption.

The political instability in Iraq started with the protests in October 2019. The activists required the resignation of the PM and were as well protesting against any ‘external’ intervention in the inner political life of the country. Meanwhile, the western media presented the protests as popular opposition to Iran (although there were some anti-Iranian elements, but they were not the dominant ones). The western Media actively spread fake news about the presence of the Islamic Revolutionary Guard Corps in Baghdad, blaming them for shooting into the crowd. The demonstrations led to the resignation of the  Iraqi PM Adel Abdul Mahdi.

The US administration indirectly supported the protesters who followed the anti-Iranian course. The assassination of the commander of the Islamic Revolutionary Guard Corps, General Qasem Soleimani, turned the protesters against the United States, and provoked several attacks on the American Embassy in Iraq. Subsequently, the Iraqi authorities demanded the withdrawal of all foreign troops from the country, thereby weakening Washington’s position and increasing Tehran’s influence. However, the US military has not yet left Iraq, and the White House continues to call on the government to abandon “unfavorable decisions.”

The new PM Al-Kazemi has been positively characterized in the US: Secretary of State Mike Pompeo welcomed the formation of the Cabinet in Iraq and, as a sign of support, extended the permit to import electricity from Iran for 120 days. The Shiite block ‘ Al-Fath’ (which is orientated towards Iran) accused al-Kazemi of surrendering their commander, Abu Mahdi al-Muhandis, who was killed by the Americans along with Iranian General Qassem Suleimani at Baghdad airport in early January.

The interesting fact about al-Kazemi is that he left Iraq in 1985, lived in the US and UK, working as a journalist, and returned to the country only in  2012. In 2016 he was appointed head of the National Intelligence Service, where one of his tasks was to deal with corruption in the agency.

On May 4, Turkish President Recep Tayyip Erdogan said  that  Libyan General Khalifa Haftar had been put into a difficult situation because of the Turkey’s support for the GNA, suggesting that the efforts of the countries supporting Haftar will not suffice to save him. Erdogan expressed the hope that good news would soon come from Libya. “We will do our best and continue to support the GNA to bring calm and peace back to the region,” Erdogan said.

This week, the GNA launched an offensive against the Al-Watiya airbase.

On May 7, the spokesman of the Libyan National Army (LNA), Ahmed Al-Mismari, announced the launch of Operation Ababil Birds.

On May 10, the Ministry of Foreign Affairs of Turkey released a declaration which said:

“Only on May 9 Haftar’s army carried out intensive artillery fire and fired more than 100 rockets. Those attacks, which targeted diplomatic missions, including the Turkish embassy in Tripoli, Mitiga airport, civilian aircraft and other civilian infrastructure, killing and injuring civilians, are war crimes.

We reiterate that if the Turkish diplomatic missions and Turkish interests in Libya are the target of the Haftar attacks, we will declare the Haftar elements as our legitimate target.

It is unacceptable that the UN fails to act in the face of such atrocities. In the holy month of Ramadan and during the pandemic, the responsibility of the international community is to stop the Haftar putschist, who is killing his people, including children, women and the elderly. It should be noted that countries providing military, financial and political support to Haftar are responsible for all despotism, chaos and instability in Libya. Turkey will continue to support Libya’s legitimate Government and institutions in order to protect its friendly and brotherly country”

On May 3, Venezuelan Interior Minister Nestor Reverol reported the prevention of a maritime invasion by Colombian militants on fast boats accompanied by former US security members. The President of the National Constitutional Assembly Diosdado Cabello said that eight attackers were killed, two were detained, one of whom was an agent of the US Drug Enforcement Agency.

The mercenaries detained for attempting to infiltrate Venezuela were to take control of the airport and kidnap the president of the Bolivarian Republic of Venezuela, Nicolas Maduro. This was reported by the detained participant of the US special operation Alexander Denman.

According to Denman, who said he was a specialist in urban tactical operations, the fee for participation in the attack was somewhere between $50 to $100 thousand, while the group consisted of 20 people. Luke Denman reported that preparations for the operation began in December 2019, with participants not being fully briefed initially.

The Venezuelan Defense Ministry confirmed “absolute loyalty” to President Nicolas Maduro and stated that “all military units are on alert.” According to the military, weapons were seized from the attackers, some of which were used in the gate attempt a year ago.

Earlier, US Secretary of State Mike Pompeo and the leader of the opposition in Venezuela Juan Guaido discussed plans for the creation of an interim government. According to the plan, Elections for the Venezuelan President and Parliament are due to happen in six to twelve months. If Maduro and Guaido recognize the interim Government, the United States promises to lift the sanctions.