Coronavirus in Africa: COVID-19 leading the continent to disaster 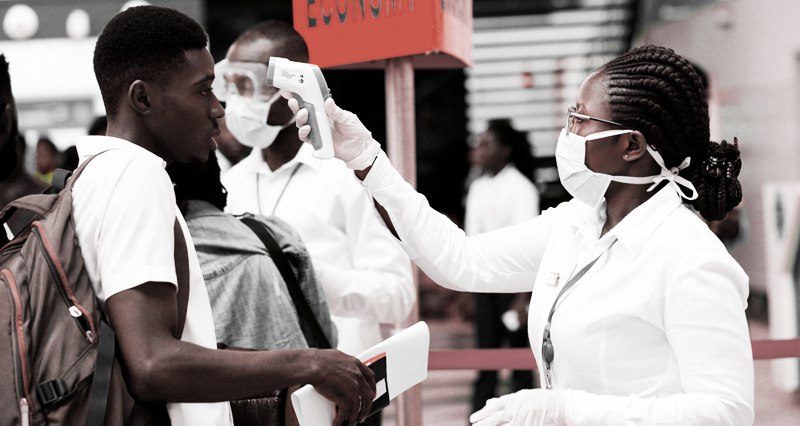 The whole world is taking action against the spread of the dangerous new virus COVID-19. After China’s tough and timely response to the pandemic, Europe and the US have become the epicenter of the epidemic. Italy, which is now being helped by China, Russia and Cuba, has been hit hardest.

The new European plague: Why the West became the epicenter of the epidemic

If we look at the geography of COVID-19, we can see that it has hit the African continent least– so far. But how long will this last? The experts are already considering the worst-case scenarios.

The geography of coronavirus in Africa

The number of people infected with coronavirus in Africa has already surpassed one thousand, but accurate figures are not yet available given the weak testing system on the continent.

The countries with the highest number of infected on the continent were mainly the northern territories – Egypt (327 +, according to official WHO data), Algeria (201) and Morocco (134)– however, the hardest hit country was South Africa (500 +).

In other countries, the figures range from 1-2 cases to several dozen. These numbers are only officially confirmed data, as nobody knows what the real picture looks like. For example, only one case of COVID-19 is reported in Libya, with its unstable military situation, but experts tend to believe that they simply do not know about the cases.

The WHO is already sounding the alarm: the head of the organization Tedros Ghebreyesus said that “Africa should prepare for the worst.”

The WHO Regional Office for Africa (AFRO) is working closely with its 47 Member States, as well as partners, in order to implement several outbreak preparedness and response interventions. AFRICOM has canceled its annual ‘African Lion’ military exercises.

The most disturbing sign was the confirmed case of coronavirus in Somalia, a country in the Horn of Africa with one of the weakest health systems on the continent after nearly three decades of conflict. Other poorer countries – Tanzania, Liberia and Benin – have also announced their first cases.

Countries are fighting a battle within nation states, just like Europe – the WHO gives a lot of advice, but has not offered much help.

The continent’s most coronavirus-filled country, South Africa, is introducing a lockdown for three weeks, President Cyril Ramaphosa announced on Monday. Only official figures have now crossed the 554 mark.

The main danger – and not only in South Africa – is COVID-19 for immune-compromised Africans suffering from HIV and tuberculosis. Public health experts are concerned that the virus could affect South Africa’s health system (one of the best on the continent) if the rate of infection continues to increase.

“The action we are taking now will have lasting economic costs,” said Ramaphosa, “but we are sure that the cost of not acting now will be far greater.”

Most new cases were found in the province of Gauteng, which includes the city of Johannesburg, the economic centre, and the capital city of Pretoria. This is the area with the most industrialized economy in Africa, which has the highest rates in sub-Saharan Africa.

Most importantly, most of the COVID-19 cases were brought to South Africa by people returning from overseas trips – mainly from Europe.

Escalation of measures to combat the #COVID19 pandemic #CoronaVirusSA https://t.co/JYuZoOqhRD

It is important that most of the COVID-19 cases have been brought to South Africa by people who have returned from abroad, mostly from Europe.

Under the new conditions, South Africans will not be allowed to leave their homes except to buy food, medicine, social benefits or seek medical care. All shops and businesses will be closed except pharmacies, supermarkets, petrol stations and medical facilities as well as laboratories, banks and other basic financial services.

“It is clear from the development of the disease in other countries and from our own modeling that immediate, swift and extraordinary action is required if we are to prevent a human catastrophe of enormous proportions in our country,” Ramaphosa added.

These are important preventive measures, given the experience of heavily affected countries in Europe and Asia.

“The numbers, we mustn’t be shocked when we see them increase. But these measures if we all work together must turn the curve around,” said Health Minister of country Zweli Mkhize.

Mkhize said South Africa could reach a turning point in the spread curve two or three weeks after the lockdown restrictions come into effect.

“Today, the government has adopted a set of additional precautionary measures to confront the spread of the coronavirus, which are urgent measures that will raise the levels of preventing the spread of the virus and reducing its infection rates … Therefore, I call on all Egyptians to fully comply with these measures,” President Al Sisi said in Twitter.

All restaurants, cafes, casinos, nightclubs, bars, shopping malls (malls) and other local shops will be closed from 19:00 to 18:00 nationwide from Thursday to March 31.

Mosques and Islamic places of worship throughout the country have been closed for two weeks from March 21, 2020.

Algeria: Algerian President Abdelmajid Tebbun ordered all state institutions on Sunday to raise the level of vigilance to the maximum in the fight against the coronavirus outbreak.

The country reported 230 confirmed cases of coronavirus while 17 people have died so far from respiratory illness.

The authorities are expected to provide $100 million to import pharmaceutical products, personal protective equipment and chemical analysis equipment as part of preventive measures.

Kais Saied, president of Tunisia where there has already been COVID-19 fatalities, has ordered the army to be stationed on the streets to force people to lock down in light of the virus.

Last week, a curfew was imposed, and starting Sunday a full lockdown. People are required to sit in their homes unless they want to buy basic necessities.

The situation is complicated not only by the coronavirus, but also by the sharp decline in oil prices which is hitting energy-rich countries in Africa. The Nigerian government intends to reduce gasoline prices due to the latest developments. The Ministry of Energy explained that this is to mitigate the economic impact of COVID-19 on the population.

Although Nigeria is one of the largest oil producers in Africa, it has to import most of the fuel used in the country, experts say.

The Rwandan Government has officially banned all “unnecessary movement” outside the home and all movement across borders.

South Africa, Ghana and Kenya have banned entry for nationals from China, Iran, Italy, Spain, the UK and the USA. Kenya has banned mass gatherings and introduced a 14-day self-isolation regime for arrivals, while the next month only nationals and residence permit holders may enter the country.

Senegal declared a state of emergency in connection with an outbreak of coronavirus (more than 70 people, and figures are increasing) and curfew from 8:00 pm to 6:00 am local time.

Morocco has suspended all international flights. Dozens of cases, including fatal ones, have already been confirmed.

Libya has announced the closure of its airspace and land borders as a preventive measure since Monday.

The President of Mozambique, Felipe Newsi, has suspended all meetings for 300 or more people.

This is also true for religious rituals: in many countries, churches have either been temporarily closed (as in Uganda) or restrictions and precautions have been imposed (disinfectors, etc., as in Nairobi).

How dangerous is the situation in Africa?

The situation is extremely dangerous in Africa, likely more so than in the West.

Firstly, because of the weak health system and lack of sufficient clean water – even for basic hand washing. In case of an outbreak, it will be very difficult to stop it, and many people will die because of lack of hospital beds.

Secondly, there remains the factor of increasing terrorist groups (as in Somalia – Al-Qaida, Al-Shabaab and others), which are always aggressive towards all kinds of foreign volunteers. The lack of security will undermine efforts to contain the virus.

Thirdly, in Africa, refugee camps – for example, in the Sahel – represent an area of risk. Hundreds of thousands of people could be at risk of being targeted by jihadism in the camp at the same time – how is it even possible to maintain basic quarantine with such a concentration of people?

Fourthly, if the epidemic breaks out, the West will not come to its aid – it is not prepared for such expensive neocolonialist efforts right now. Even with the active participation of the West in 2014-2016, Ebola has not subsided in Africa for a long time – and now Africa has to act on its own. Meanwhile, the “bad guys” – China, Russia and others – are the ones actually helping. For example, Chinese billionaire Jack Ma, co-founder of Alibaba, promised to donate 20,000 COVID-19 test kits, 100,000 medical masks and 1,000 protective suits to each African country. At the same time, Russia is donating humanitarian supplies to help fight the drought that is making the fight against the pandemic more difficult.

Is COVID-19 an American bioweapon?

Fifth, the monitoring system in Africa is not working well, especially in villages without technology. In other words, it is simply impossible to calculate the cases of coronavirus and get an adequate picture due to poverty and lack of tests. It is possible that someone will treat the situation carelessly and simply will not inform the neighbors – at the peak of the Ebola epidemic Tanzania was even accused of not informing their neighbors about the problem.

Sixth, Africa has a high HIV infection rate and many communities have AIDS and suffer from malnutrition. All this means weak immunity systems, which becomes a risk factor.

Seventh, Africa is not protected. It remains heavily colonized by the West. It is highly dependent on exports and imports, so the restrictions imposed (certainly necessary) will hit the economy very hard.

Many African States are taking action earlier than Europe to suppress the coronavirus in an effort to eradicate the disease. This is because the epidemic will be virtually impossible to control in countries with overcrowded settlements and fragile health systems.

Although by European and Asian standards the current figures are few, they are increasing rapidly.

There are also positive factors that will help Africa:

1) Warm climate (which slows down the spread of the virus)

2) Large share of young people and girls – average age 19-20 years. Young people survive COVID-19 easier, which means that mortality rates across the continent should not be too high.

Africa is also experiencing the negative effects of globalization. The concept of the “open society” is failing – we see this in the case of Johannesburg as the centre of globalization in Africa.

Some have already long understood this. Zimbabwe Defence Minister Oppah Muchinguri Kashiri even emotionally stated that the coronavirus is God’s punishment to countries that have imposed sanctions and that the virus will show Donald Trump that “he is not God.”

Only a sovereign Africa – in economic, medical, political terms – functioning as part of a truly multipolar world, can survive such epidemics. There is such a wealth of resources across the continent that a domestic pan-African system of mutual aid would be the best solution for the continent.

Africa needs to establish not only a domestic quarantine – but also an external one – in international politics, abandoning the neocolonial influence of the West.