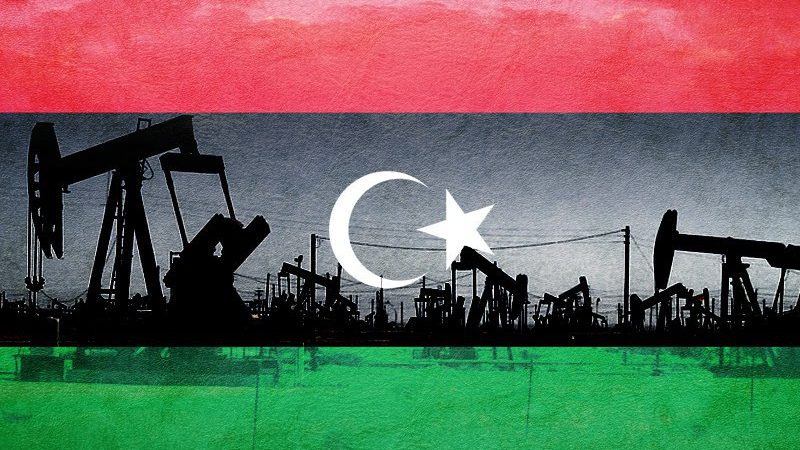 The Libyan oil and gas sector are the main arteries of the country’s economy and one of its only sources of income. However, military forces recently closed most of the major Libyan ports. It seems that Khalifa Haftar and his forces are trying to win concessions from the constitutional government and the international community by stopping Libyan oil exports.

The issue is also related to the efforts of regional countries and world powers to push for the breakup of Libya, motivated by the abundance of oil resources in the country.

The United States is calling for an immediate resumption of Libya’s lifeline oil exports that have been blocked by forces loyal to commander of the Libyan National Army, Khalifa Haftar, since last week.https://t.co/zg6yx07aNn

The approach seems to make it easier for the United States to access the vast oil fields in eastern Libya. The US sees Libya’s oil resources as potentially strategic due to their proximity to the Mediterranean Sea. If secured, it would be possible to send Libyan oil quickly to Western countries in the event of an energy crisis through the oil terminals on the Mediterranean coast.

Crude, disrupted. Libya stands to lose more than 1 million bpd as unrest cripples oil production. With almost all major fields (El Sharara, El Feel) and pipelines shut down, output could plunge below 100,000 bpd in the coming days – levels not seen since the 2011 civil war. pic.twitter.com/wKh2xxPZ42

It's lights out at the Sharara oilfield in southwestern #Libya as production comes to a grinding halt amid a forced pipeline closure feeding the Med Sea port of Zawiyah. Sharara accounts for roughly 25% of Libya's oil production. Daily satellite imagery by @planetlabs #OOTT pic.twitter.com/e6uOiBo6lo

LIBYAN OIL EXPORTS TO THE EU

Although it has proven to be one of the biggest challenges in maintaining the OPEC cuts, Libyan oil officials said last year that they wanted to reach 1.5 million barrels a day by the end of 2018. However, it is unlikely that a deal among the parties will be reached (given the security situation). About 85% of Libya’s oil exports have already been targeted by the European countries a short distance away. Prior to the war in Libya, the country supplied 11% of the crude needed by European countries with 403 million barrels of crude annually exported to Europe, and was the continent’s third-largest supplier of crude oil after Norway and Russia.

Libya exported gas solely to Italy in 2019. Statistics indicate that Libya exported 15 million cu m/d on average and a total of 5.4 Bcm to Italy, which accounts for 8% of Italy’s total gas consumption. Since the month of April, General Khalifa Haftar and LNA have sought to take over Tripoli, which is under the control of the Libyan Government of National Accord, (GNA) which is supported by the UN.

US INTERESTS IN LIBYA

US’ integration with NATO after the fall of Gaddafi can also be viewed from this angle. Although the United States banned the creation of a flight zone because of the crisis of legitimacy and the wave of organized violence, the US’ role in managing the Libyan crisis is due to its having more incentive to restore oil relations. The United States has been pursuing strategic oil reserves strategy for nearly five decades now, with Libya seemingly being the right choice.

Libya’s National Petroleum Company is currently the sole supplier of the country’s oil to the world market, but most of the oilfields and infrastructure are controlled by the military. International oil companies and investors have stepped in, but are reluctant to invest in reopening the fields if internal conflicts continue. A decisive triumph by one side may lead to the revival of the Libyan oil star and the resumption of operations by the National Petroleum Corporation. A stable situation in Libya will facilitate the return of numerous European operators, notably Total, Eni and possibly Shell. Along with the Europeans, the US and Russian companies are also competing for oil assets.

Libya’s National Petroleum Company, which owns Africa’s second-largest oil reserve, said in a statement that Libyan oil production would decline by around 200,000 barrels per day as a result of blocking ports in central and eastern parts of Libya, meaning that there will be a loss of $55 million daily. The closure of the oil fields blocks the prime income source of prime minister Fayyad al-Saraj’s government. Oil sales go to the central bank and are used by the government in Tripoli to buy weapons and defend themselves. Libya’s oil production stood at 1.3 million barrels a day before the closures.

After gas export ports in the country were shut down, the global gas market was hit hard, resulting in an increase in gas prices. A continuation of this policy will cause the drop in petroleum production in Libya to continue and, in turn, accelerate in the increase prices in the global market.

As Libyan resources become more important, Europe’s role in the country is sure to increase. The Italian government has also pledged to invest $5 billion in Libya, and Libya has offered to cut the volume of immigration to the Mediterranean in return. Libya has Africa’s largest oil reserves. France is concerned with having a diplomatic ally in North Africa. Eni, 30% of which is owned by Italy, has recently taken control from British Petroleum in the Libyan capital. Eni hopes to resume oil and gas exploration, which means that widespread corruption and instability in Libyan oil sector must be resolved quickly.

Given the current situation and the issue of EU energy security, the EU’s efforts to resolve the conflict in Libya will continue to increase as energy imports from Libya continue to decline. Given the equilibrium in the oil market in the short term, the Libyan crisis will not have much of an impact if it continues. Major countries cannot meet market demand. One can expect oil prices to rise. Among the European countries, France and Italy will monitor Libya more closely because of a lack of political influence in the region.

Major energy companies and world powers are competing for control of energy sources and these powers and partners will continue to compete for Libya’s gas and oil fields. The main issue at hand is figuring out to what extent the people of Libya will be able to benefit from the economic and social benefits of energy exports if peace is achieved and major partners in the oil and gas industries return. Given the low cost of oil production in Libya, will the Libyan people see any benefit?