“INTERNAL DYNAMICS” OR “EXTERNAL INTERFERENCE” IN THE ARAB WORLD? Part 2 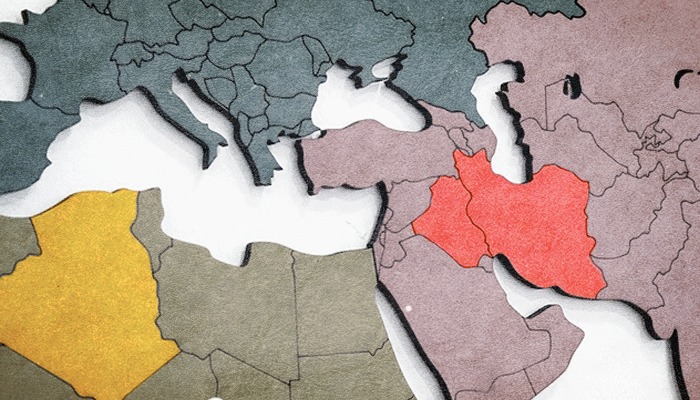 Although the ongoing protests in Iraq, Lebanon and Algeria began as a result of internal factors, there are many indications of US, Israeli, French and Saudi Arabian involvement.

Non-governmental organizations, media forces and lobbies are being used as tools by external forces to take control of and guide the protests in their own interests.

Before explaining the precise actions of foreign powers, it is crucial to note that the protests were initially based on actual internal dynamics and structural problems in the countries in question.

WEAKING IRAN VIA IRAQ AND LEBANON

Iraq and Lebanon are currently being treated as fronts where Iran squares off against the US-Israeli block for influence.

Removal of #Iran regime’s symbol and consulate in Najaf, #Iraq

The protests started as a result of reasonable economic demands in both countries, but have since been channeled by the Western media and intelligence organizations against Iran and groups close to them (Hezbollah, Hashdi Shabi etc.).

Sources in the region say that incidents such as police opening fire on civilians, sabotage and looting were provoked by foreign intelligence organizations.

At this point, it is worth remembering Iranian religious leader Ali Khamenei’s statementsabout the protests. He said that“the intelligence services of the US and Western countries are causing chaos with the financial support of some other countries in the region.”

Khamenei’s statements place the blame on the US, France, Israel and Saudi Arabia in particular.

Khamenei’s assessment is that the “people have rightful demands, but it should be known that these demands will be realized within the framework of legal structures. If the legal structures in a country falls apart, no positive steps can be taken for the country.”This indicates that Iran recognizes that the problems are the result of internal dynamics at some level.

Another goal of the US-Israeli block, which is guiding the protests in order to weaken the central governments in Iraq and Lebanon, is to promote instability in the region by leaving openings for ISIS and similar terrorist organizations, currently trapped in Syria, to move toward Iraq and Lebanon.

The West has numerous goals in fomenting the protests in Iraq and Lebanon, such as:

The US-Israeli block, which seeks to use the protests in Lebanon to initiate a new Shiite-Sunni conflict, want to relieve the pressure Hezbollah and the Lebanese resistance is putting on Israel by launching a new civil war.

REALIZING THE DREAM OF A BARZANI STATE

In terms of the protests in Iraq, the US is hoping to weaken the central government in order to strengthen Masoud Barzani and revive the dream of creating an independent “Barzani State”.

Lebanon and Algeria are of great strategic importance in China’s Belt and Road initiative.

As a matter of fact, the Iraqi and Algerian administrations had already announced that they would participate in the Belt and Road Initiative in the near future.

In the countries where protests are ongoing, China has investments in different areas, especially in the energy sector.

The ultimate goal of the forces trying to manipulate the protests is to provoke instability in the region,thereby preventing the China’s Belt and Road Initiative from connecting to Europe by land through the West Asia and the Mediterranean by sea.

THE VULNERABILITY OF A NATION WITH AN OPEN WOUND

As long as the governments of these countries maintain economic stratification, keep tolerating corruption and continue to divide their societies through ethnic/sectarian divisions, the protests will continue, and rightfully so.

As long as these protests continue, external forces will make use of them rightful for their imperialist interests.

The struggle against imperialism is a social and economic fight, as well as a military one.

Unless the economic and social demands and needs of society are answered, imperialism will continue to take advantage of the nations’ open wounds to spread their infection.