Navies, diplomats and the quest to escape an imperial currency 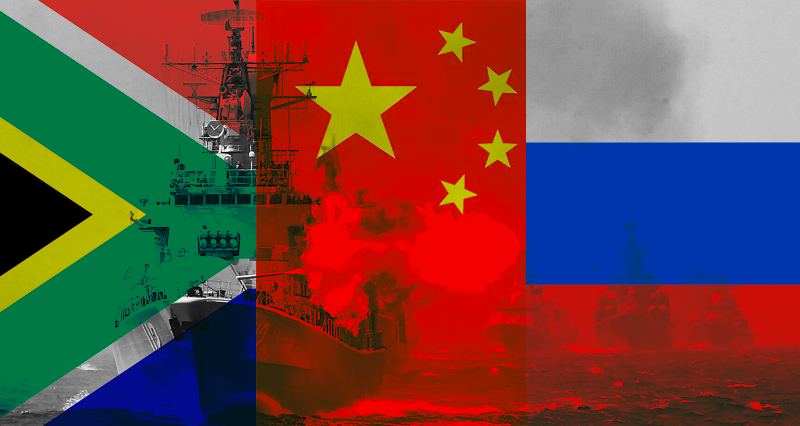 Over the weekend, the military aspect of current global block confrontation became visible one again: Western nations gathered in the American military base in Ramstein, Germany, to negotiate further arms deliveries to Ukraine.

Some 9.000 kilometers to the south, in Durban and Richards Bay, the navies of South Africa, China and Russia gathered for a joint naval exercise. The maneuvers, exercised the second time after 2019, take place right before the first anniversary of the Ukraine war, or the Special Military operation as it is called in Russia.

The exercise started on February 17 and will last till the 27th. Unsurprisingly, criticism appeared in Western press. On February 19, the South African National Defence Force made an official statement that was quite challenging the critics.

It described the exercise as “a means to strengthen the already flourishing relations between South Africa, Russia and China”.

Back in August, the South African Minister of Defence visited the Moscow Security Conference and met with his Russian counterpart, discussing bilateral military and military-technical cooperation.

Following the begin of the military exercise, Russian Foreign Minister Lavrov have arrived on an official visit to South Africa, which Moscow titles officially as “a friendly country”. South Africa has repeatedly rejected Western pressure to condemn the Russian position in the Ukraine conflict.

The United States has described the conflict in Ukraine as one of the “rules-based international order”. It is very true that Washington is facing an unprecedented challenge far beyond the borders of Ukraine.

Until today, the U.S. has exercised all kinds of military interventions as applications of a given (American) order: While a certain country was attacked, the international community was forced to join by applying according condemnations in international institutions and applying the necessary sanctions.

Washington presented the military intervention to the international community of states as a means of reproducing the (US-dominated and surveilled) international order, of which they all were – according to their contribution – benefiting from.

The targets of interventions meanwhile presented as exemptions and disruptions of order.

This is today challenged – among others by South Africa. In the Department of International Relations and Cooperation’s (Foreign Ministry) official magazine, the Deputy Director Clayson Monyela writes:

“This, however, shouldn’t oblige or bind South Africa to adopt the interests of NATO as its National Interest.”

His chief, the Minister Dr. Naledi Pandor expresses that even more confidently: She cites the preamble of the UN Charter against the members of the UN Security Council, concluding that the UNSC “in composition and functioning is not representative of the world”.

South Africa, together with the BRICS, whose presidency the country takes over in 2023, projects no less than to establish a global order by contesting the given one.

The US reaction: Unattended summits and punishing laws

The U.S. government has already observed that, similar to Latin America, Africa has also become a stage for “great power competition”. This means nothing less than that Washington’s acknowledgement that its dominance is contested globally.

It reacted by calling to a U.S.-Africa summit in December 2022. A summit to which the President of South Africa – one of the continent’s leading countries – did not attend due to “busy schedule” – as Minister Pandor stated.

Back in April, a new bill was introduced to the U.S. Congress, titled: “Countering Malign Russian Activities in Africa Act”. The bill demands to “regularly address the scale and scope of the Russian Federations influence and activities in Africa that undermine U.S. objectives and interests”; to “address and counter” these and to “hold accountable Russian Federation and African governments officials”.

The bill was approved in the House – and reintroduced by the same Representative again on December 1, 2022. The only difference: the new bill’s geographical coverage broadened from Africa to include Latin America, the Middle East and other regions as appropriate” – globally.

South African Minister of Foreign Affairs described the U.S. position to choose sides in the Ukraine as “patronizing and bullying”. She called the US bill a “violation of international law”: another example how the US-established-order – the ‘international law’ – is being turned against the U.S. itself.

Speaking ahead of Lavrov’s visit, Pandor said “we benefit from cooperation with countries such Russia, which is a powerful military nation, in terms of international peacekeeping operations and in terms of protecting our country. We benefit from experience and equipment.”

Pandor continued to challenge the US-world order, by questioning one of its anchors: She said one of the motivations for BRICS to establish the New Development Bank in 2014 was to reduce their dependence on the dollar-based system. “We have always been concerned by the fact that there is a dominance of the dollar and that we do need to look at alternative,” she added.

The United States government is right: The conflict in Ukraine has achieved a truly global character.