Italy 2022: The coldest winter ever 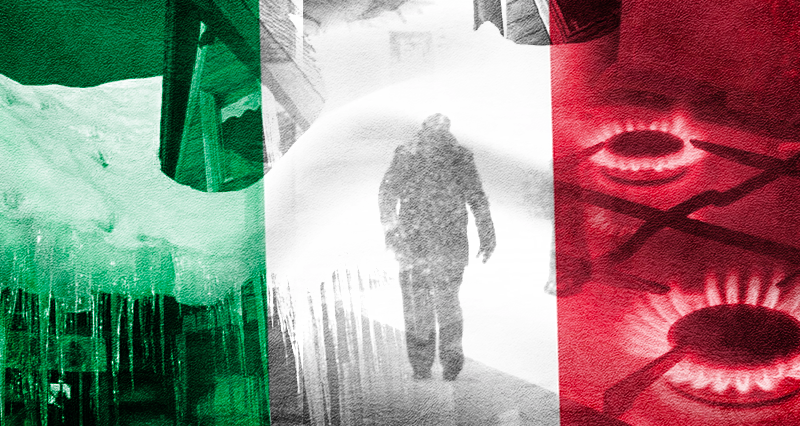 As is customary this time of year in December, the first real cold of the season has arrived in Italy. This is not news, because it is, in fact, a custom. What is different this year are the economic and social conditions: We are living in a country that has not yet recovered from the consequences of Covid and that has had to implement real war policies due to an incapable ruling class unable to oppose the warmongering agenda imposed by the USA/NATO/EU triad.

A criminal policy has plunged Italy into a real social emergency.

A poor and cold Christmas

No gifts this year for one in six Italians due to the austerity climate determined especially by economic difficulties and concerns for the future. This is the picture that emerges from the Coldiretti/Ixe analysis that, however, shows that 23% fewer people are giving up the traditional gift compared to last year – and that year already was still marked by the effects of the pandemic.

According to Coldiretti, Italians have spent an average of 177 euros per head, but many have been forced to use money that they would have spent on gifts or other consumer goods to meet urgent expenses such as the payment of increasingly exorbitant energy bills.

The tip of the iceberg of the situation of hardship in Italy is that in 2022, 3 million people have been forced to ask for help for food to eat, based on data on food aid distributed with Fead funds through the Agency for Agricultural Payments (Agea).

An unprecedented social emergency since the last post-war period – Coldiretti emphasizes – with the number of children under 15 years of age needing assistance to eat exceeding 600,000, practically one fifth of the total assisted, to which must be added 337,000 elderly over 65 years of age, and 687,000 foreign migrants.

Among the new poor – Coldiretti continues – there are also those who have lost their job, small merchants or craftsmen who have had to close, people employed in the underground economy who do not enjoy particular subsidies or public aid and do not have savings set aside, as well as many temporary workers or those with activities affected by measures against the Covid pandemic and the surge in energy costs with expensive bills.

The coldest winter ever

Italians are unable to heat their homes because of expensive bills. The winter of 2022-2023 will be the coldest ever regardless of how low the mercury falls. Eight Italians out of a hundred (8.1%) – almost one in ten – are unable to adequately heat their homes. And their number is expected to increase during the winter, given the continuous increases in the cost of bills and a continuous reduction in purchasing power. Coldiretti, which based its analysis on the Istat Report on Sustainable Development Goals (SDGs), which updated and analyzed statistical measures aimed at monitoring Agenda 2030, brought these numbers to light.

There are at least 5.6 million people who are in a condition of absolute poverty. The population at risk of poverty or social exclusion is at least 25.4%.

This is the context in which the expensive bills, which force people to live in cold and therefore unhealthy homes, are worsening the situation. In October alone, electricity tariffs increased by 59%, while gas saw an increase of 63.7% compared to the previous year. These increases make energy supplies unsustainable for thousands of families. Essentially, this means that many families will not be able to pay their electricity and gas bills. Families that will suffer interruptions and disconnections of supplies. Therefore, one in ten Italians will be forced to stay cold because they will not be able to pay the bills.

Following the elections, the government presided over by quisling Mario Draghi was replaced by one led by the leader of Fratelli d’Italia, Giorgia Meloni. Yet little or nothing seems to have changed. Neoliberalism and warmongering policies continue to be imposed on Italy and the government uncritically accepts them.

Giorgia Meloni could turn her gaze eastward where there is a head of state who has refused to apply sanctions and continues to acquire the resources necessary for his country from Russia. This is Hungarian Viktor Orban, a leader whom Meloni in the past indicated as a reference point and defined as a “European patriot”. But once in the government of Italy, Giorgia Meloni seems to have suddenly forgotten her battles and her old reference points.

It was the year 2014 when Giorgia Meloni spoke in the Chamber of Deputies, lashing out against the government and the policies of western countries: ‘We are disconcerted by the frivolity with which our government seems to address the issue of our economic and geopolitical relations with Russia and the repercussions that the sanctions against Moscow and the consequent Russian counter-sanctions may have for the Italian economy’. The reference was to the situation in Crimea. “With the continuation of this crisis there will be many other sectors involved (textiles, clothing, luxury, tourism) and many other losses. And all this is nothing compared to what would happen if Russia decided to cut off our gas supplies. Our bills will increase because of the sanctions”. And again: “Are we risking all this to support EU policy? Of course we are not defending our national interest. It makes no sense to force the entry of Ukraine and NATO because we need the Russian Federation”.

The current situation is exactly what Meloni photographed in 2014. Instead, the quisling European rulers who evidently do not act in the interests of their own peoples have given up gas from Russia.

Giorgia Meloni should therefore take note that today as then “we are not defending our national interest”, because “we need the Russian Federation”.