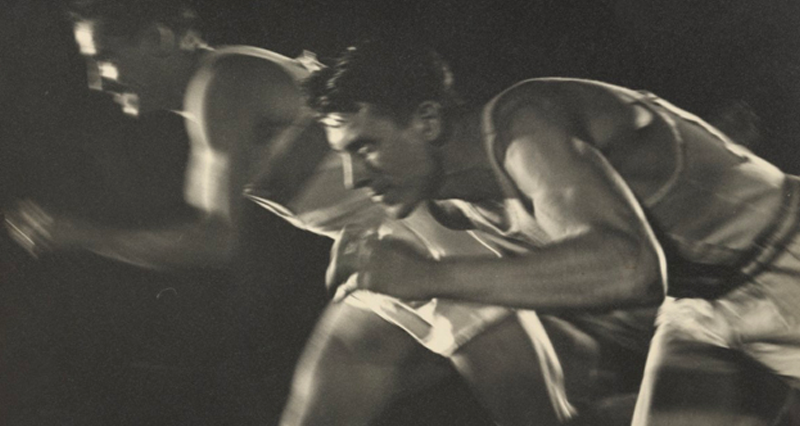 Art is the most authentic manifestation of the cultural heritage of mankind and the basis of humanistic civilization. Sport is the manifestation of a „technical civilization“ and as such deals with humanistic civilization, which means that it is a means for creating a civilization without culture. Unlike philosophy, science and art, sport does not offer the possibility of establishing a (critical) relation to the existing world or the possibility of overcoming this world. In art, a conflict leads to quality, something new – unlike sport, which is governed by the absolutized principle of quantitatively measurable performance. Sport deals with historical time: the „history of sport“ is reduced to a linear augmentation of numbers (records) to which the names of impersonal „champions“ are attached. In playing sports, the quantity of different „situations“ conceals a lack of possibility for stepping out of the existing world and creating a novum. A work of art has a universal value and is intended for all people regardless of their race, nation and gender: art creates symbols which express universal human values. In order to understand and experience their meaning man has to have the power of reasoning and a developed esthetic sense, which means a developed cultural being. Sport also aspires to become a universal and global phenomenon. The essence of the „Olympic universalism“ is based on the universal character of the fundamental principles of capitalism: bellum omnium contra omnes and the absolutized principle of performance shaped in the Olympic maxim citius, altius, fortius. Sport is the crown of a „mondialistic“ ideology which deals with national cultures, destroys man’s artistic being and turns him into a „civilized beast“. In sport, the prevailing spirit is not that of creativity, but of victory. Medals are not won for creating something new, more beautiful and human – but for the victory achieved by an ever better result (record). The true effect of art is the development of man’s aesthetic being, which means man’s specific and unique creativeness, while in sport man is reduced to the model of a dehumanized and denaturalized „sportsman“. Artistic competition is based on the spiritual motion of one man towards another, and not on one man’s physical confrontation with another man, which involves the infliction of bodily injuries and killings, as is the case in sport. In art, there are no winners and losers, but only the development of man’s creative powers and widening of the horizons of freedom: art enables man to become that what he is not but can be. In sport, man „becomes something else“ by way of physical and mental activity which alienates him from himself and destroys his cultural and biological being. A sportsman „makes“ sports „achievements“ by means of a technicized body and combative character and with a dehumanized and denaturalized skill. What is being created is victory and record, which means that a sportsman produces the ruling relations and values. Sport deals with competition which does not involve the domination of one man over another and his elimination from the life contest, as well as with the competition which enables man to step out of the existing world. Furthermore, in art, there is no sex segregation, while in sport women, being physically and in their character „weaker“ than men, are reduced to „lower beings“; art is dominated by man’s aesthetic nature and limitless creative powers, while in sportresults are conditioned by man’s restricted physical capacities; a work of art is intended for people with a developed aesthetic sense, while a sports spectacle is intended for „masses“ deprived of their rights, as the cheapest spiritual food which should destroy their libertarian and cultural being and turn them into idiots…

Art creates a humanized sociability based on the motion of man towards another man. A sports team is not a cultural community, but an anti-cultural, anti-reasonable, anti-erotic, anti-aesthetic, pseudo-social group, with a militaristic structure: sport is a war waged by bodies and a dehumanized playing technique. As such, it is an institutionalized violence where killings, physical injuries, bodily and mental mutilation of children are legalized… Sports play does not produce humane people, but fanatics ready to destroy both their own body and that of their „opponents“ in order to achieve victory (record). A sportsman’s face, as the anthropological manifestation of the ruling spirit, is not expected to have a noble expression, it should rather express the „victorious spirit“, which means his fanatical commitment to victory, while his body is to be the symbol of the expansionist power and stability of the ruling order. Coubertin’s maxim mens fervida in corpore lacertoso indicates the esthetic pattern prevalent in sport. Not a harmonious body, as was the case in antiquity, but a muscular body in combative exertion – this is the highest esthetic challenge. In contemporary capitalism („consumer society“), sportsmen relate to each other in roles they are given in the show-business, which means as (sporting) commodity. The rules which apply to them are those which apply to any other commodity on the market, although they are not an „ordinary“ commodity, but the commodity with a special purpose: they are here to fulfil the strategic interests of capitalism.

In sport, imagination does not strive to create something new nor does it seek to escape from the existing world; it rather deifies the ruling relations by means of appropriate symbols. Sports aesthetics is of a mystifying and cult character. A typical example is the film by Leni Riefenstahl about the Nazi Olympic Games „Olympia“ („Festivity of People-Festivity of Beauty“/„Fest der Völker-Fest der Schönheit“). Riefenstahl’s camera „carves“ modern sportsmen according to the ancient aesthetic model from the „cosmological period“ (Windelband), which has a religious character and expresses the domination of a (geometrically constructed) cosmic order over man. Bodily monumentality, harmony, eyes directed to the skies, religious devotion, self-confidence, exultation – this is the physical appearance of the contemporary Olympic contestant. The sports body acquires a cult character: sportsmen become live statues – manifestations of ancient „heroes“ (semi-gods) and as such are the symbolic reincarnation of the „immortal spirit of antiquity“. Her aesthetic is the mythological picture of a triumphalism which, through the idealized ancient model of man (Hellenes) acquires a timeless dimension. Using the ancient aesthetic model, Riefenstahl falsified a concrete historical image of the contemporary sportsman and thus the capitalist order. The close-up shows symbols which give a quasi-mythological dimension to the ruling values: the spirit of capitalism has the ancient religious veil.

Riefenstahl’s film tries to prove that the Nazi regime is the immediate successor of the Hellenic civilization. Her film came at the time of the final stages of German archaeological excavations in ancient Olympia, which started at the time of Bismarck and were completed by the Nazis; it shows the carrying of the „Olympic torch“ from „holy“ Olympia to the Nazi Berlin (designed and realized by the organizer of the Nazi Olympic Games Carl Diem, Coubertin’s „ingenious friend”), which clearly expresses the Nazi’s wish to present themselves as heirs of the Hellenic cultural heritage. „Olympia“ is a propagandist spot in the artistic disguise. Its aesthetics is reduced to a technical means for turning people into the symbol of fascist expansion, with the Nazi model of „superman“ being „superseded“ by a mythologized ancient model of winner. It is an abuse of the artistic form meant to produce particular psychological effects and achieve particular political goals. In Coubertin, also, we do not find an authentic sports aesthetics; he rather tries to estheticize sport by (ab) using the works of art (Beethoven, above all). The main reason for that lies in the nature of sport: in it, man does not follow his artistic nature – which is based on man’s need for another man and, in that context, on man’s motion towards another man – but his combative character and an appropriate body.

In spite of glorifying the ancient world, the philosophy of sport does not find in it any aesthetic challenges. One of the main reasons for that is the „static“ nature of antiquity which is opposed to the Social Darwinist and progressistic character of modern times that conditions the nature of sport. Sports aesthetics does not have a formal character, which means that it does not stick to the a priori rules; it is rather a „cultural“ expression of the ruling spirit with a dynamic character. At the same time, in addition to obtaining a „cultural legitimacy“ for sport, sports aesthetics also creates a „magic“ which inseminates man with the spirit of the ruling relations. Sport is more than an „ornament“ (agalma): it deifies the existing world and pins man down to it. For Schiller, „education by way of art is education for art“; education by way of sport is education for the existing life which destroys man’s aesthetic being.

* Lubodrag Simonovic (72) was a member of the Yugoslav national basketball team, which won the world championship in 1970. Several times he played for the national team along with Sergei and Alexander Belov. He was a participant in the Olympic Games in Munich. In protest against the cover-up of a doping scam with Puerto Rico, he left the Games, after which he was expelled from the national team. The author is a Master of Laws and a Doctor of Philosophy. He has published ten books in the fields of philosophy, sociology and historiography. His texts have been translated into English, Russian, Italian, Spanish, Turkish. He taught at domestic and foreign universities. He is married and has three children and six grandchildren. Simonovic lives in Belgrade.