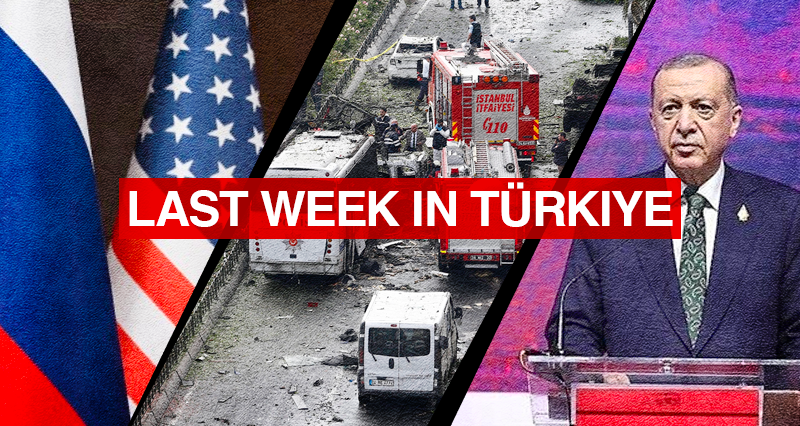 Turkey has had a difficult week.

A terrorist bomb attack organized by the PKK terrorist organization, took place at the heart of Istanbul, Istiklal Street, killing 6 people and injuring more than 50.

Another issue on the agenda was the meeting between Russian and American intelligence officials in Ankara.

Third agenda was the President Erdogan’s meeting held in the Indonesian Island of Bali as a part of the G20 summit.

American involvement in the terror attack in Istanbul

Türkiye was shocked by a terrorist attack on Sunday on Taksim/Istiklal Street, one of Istanbul’s busiest centers.

In the bomb attack organized by the terrorist Ahlam Albashir, a Syrian national and a member of the PKK terrorist organization, 6 people, including children, have been killed and more than 50 people were left injured.

Turkish security forces have captured the attacker and her partners alive just hours after the attack. In her testimony, she admitted her connections with the PKK terrorist organization, while stating that she had crossed into Türkiye from northern Syria specifically to carry out this attack.

After the attack, officials and politicians made harsh statements, especially against the United States, which is known to support the PKK terrorist organization.

Interior Minister Suleyman Soylu stated, “We do not accept the condolences from the US Embassy. Of course, our alliance with a state that finances terror zones in Kobane and sends supplies directly its own senate or that tries to disturb Türkiye’s peace over there, should be revised”.

President Erdogan stated, “Efforts to take over Türkiye and the Turkish nation through terrorism, will not prevail today as they neither did before. Let our nation be sure that all the elements behind the incident that took place at Istiklal Street, will be uncovered and the perpetrators will be punished in the way they deserve”.

The Vice President Fuat Oktay stated “Whoever is behind these events will be reached, not only within our borders but also on the other side of the world, as we have reached all other terrorists, and will be brought to Türkiye”.

The Vatan Party Leader Doğu Perinçek said: “The forces behind this attack are clearly known. Whichever terrorist organization claims the responsibility for this attack, it is actually the United States that has given the order to do it. Whether it is the PKK, FETO, Daesh; they are all controlled from Washington. Our troops, police force and village guards are all fighting against terrorism with all their hearts. But the political party behind this terrorist organization HDP is still operating in the country. The Supreme Court is does not fulfill its duty. And the government is still asking for support for a constitutional amendment from the HDP. This legitimizes the terrorist party. Türkiye is facing challenges as it heads towards the elections. Our country needs a government that will not bend or twist against such difficulties, that will stand tall against this terrorist organization and its political party, and that will encourage our security forces. Vatan Party is ready to take the duty!”

The opposition “table of six”, formed by 6 opposition parties have all condemned the attack, without explicitly naming the PKK.

“We will never compromise our solid stance against those who want to design Türkiye with terrorist attacks. We will not allow terrorist organizations to achieve their goals under any circumstances”, the coalition announced.

On the other hand, after the attack different segments of the public, especially the non-governmental organizations and associations, have all reacted against the US, which is known to provide weapons and political support to the PKK.

Many newspapers and television networks have also published explicit statements about the United States as the responsible for this attack.

And the response of the US side to these reactions was to condemn the Interior Minister Suleyman Soylu’s statements pointing the US as the culprit behind the attack.

In light of these developments, the ties between Türkiye and the United States are expected to be strained more in the upcoming days.

Another topic among Türkiye’s public agenda was the meeting of the heads of Russian and American intelligences in the capital city of Ankara.

While the meeting remained unannounced at the beginning, it was officially announced with the statements of Turkish, Russian and American officials.

Noting that threats to international security, especially the use of nuclear weapons, were discussed at the meeting, Turkish Communications Directorate Chief Fahrettin Altun said, “Türkiye, which previously met the Foreign Ministers of Ukraine and Russia and mediated the grain corridor agreement, will continue to negotiate with all parties for global peace and will not hesitate to take any initiatives in this process”.

A White House official who kept its name anonymous stated, “CIA chief Bill Burns will meet with his Russian counterpart in Ankara today. There will be no negotiations on behalf of Ukraine. Burns will not discuss a resolution to the Ukrainian war. He will only convey a message about the consequences of Russia’s use of nuclear weapons and the escalation of tensions in strategic stability”.

The statement also said that Burns would also raise the issue of American citizens that are “unjustly” taken hostage in Russia, adding “We informed Ukraine about this meeting. We strictly adhere to our principles: there will be no negotiations without Ukraine” the statement said.

Kremlin spokesman Dmitry Peskov announced that the meeting between the CIA and the Russian Foreign Intelligence Service (SVR) which took place in Ankara, was held at the request of the United States.

During the summit, Erdogan and the American President Joe Biden held a bilateral meeting. The meeting was reported to have taken place in a cold and tense atmosphere.

White House officials initially said the meeting was an unplanned ‘pull aside,’ but the video showed the two leaders sitting at a table adorned with a US and a Turkish flag.

It was a potentially sensitive moment, with Türkiye sometimes frustrating the US and NATO allies, buying a Russian air defense system and raising objections to Sweden and Finland joining the alliance.

But that has bought it leverage with Moscow.

“President Biden expressed his appreciation to President Erdogan for his efforts to renew the Black Sea Grain Initiative, which they both agreed has been critical to improving global food security amid Russia’s war and that the initiative must continue,” the White House said.

Biden has said he supports the sale and that he would work to convince lawmakers to deliver the F-16 jets for Turkish Air Force.