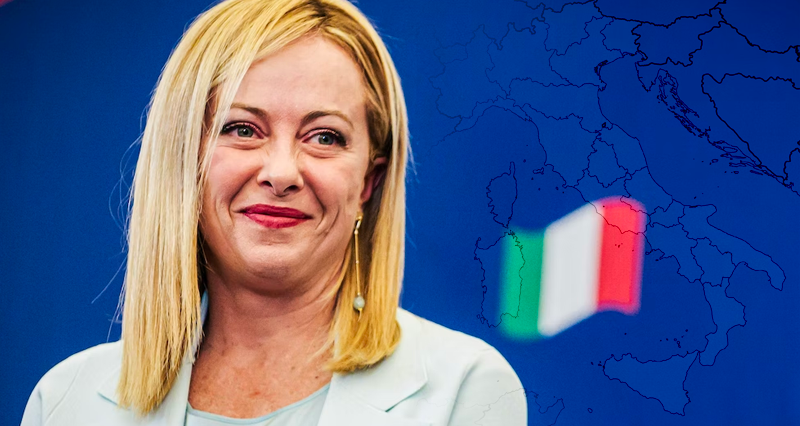 Which foreign policy will the new Italian government led by Prime Minister Giorgia Meloni follow? Meloni herself answered this question at the end of October, in the aftermath of Berlusconi’s statements on the situation in Ukraine. “On one thing I have been, am, and will always be clear. I intend to lead a government with a clear and unequivocal foreign policy line. Italy is fully, and with its head held high, part of Europe and the Atlantic Alliance. Anyone who does not agree with this cornerstone cannot be part of the government”.

She then added: “Italy with us in government will never be the weak link in the West, the unreliable nation so dear to many of our detractors. It will revive its credibility and thus defend its interests”. A fair and shareable concept but one that evidently clashes with reality. A reality that tells us instead of an Italy locked in the European cage and subservient to the wishes of the USA and NATO.

In ‘Quaderni dal Carcere’ (Prison Notebooks), Antonio Gramsci wrote: “Another element to be examined is the organic relationship between the domestic and foreign policy of a State. Is it domestic policy that determines foreign policy or vice versa? Here again, a distinction must be made between great powers, with relative international autonomy, and other powers, and again between different forms of government”.

This is exactly the case for Italy, which cannot and must not express a policy of international autonomy.

It is precisely for this reason that the new Italian government, while operating in full continuity with previous governments with regard to submission to NATO and the absurd neo-liberal budgetary rules of the European Union, will try on some issues to raise a fuss, mostly in the media, in order to accredit itself as an executive bent on defending Italy’s national interest, as demonstrated by the recent controversy with France over the issue of African migrants transported to Italian shores by NGOs operating in the Mediterranean.

Even before the elections, the center-right coalition led by Meloni had already declared its Atlantic alignment several times. In this regard, a leader of Fratelli D’Italia, Adolfo Urso (at that time president of Copasir – Parliamentary Committee for the Security of the Republic), went on a mission to Washington officially as part of the collaboration in the fight against ‘fake news’, but more likely, also and above all, to ensure that a center-right government led by Giorgia Meloni would continue to pursue the path of submission to the desiderata of the US and NATO.

It is very likely that Meloni will take advantage of the G20 in Bali on 15 and 16 November for a bilateral with US President Joe Biden. On this occasion, besides reaffirming – for the umpteenth time – Rome’s loyalty to the Atlantic alliance and thus to the United States, the Italian Prime Minister will ask Biden for a more ‘weighty’ role for Italy in the Atlantic alliance. First of all, Meloni wants Italy to obtain from Washington the garrison of the Sicilian Channel. A corridor that Meloni considers strategic not only to contain migratory flows but also for security reasons, such as the energy sources coming from North Africa (Algeria, Libya) and possible threats from countries like Russia and Türkiye, which the current government considers ‘hostile’.

Meloni has also been arguing for some time that Italy should become central in the strategy of strengthening NATO’s southern front, thus imagining for the country a role similar to the one taken on by Greece, which the United States uses in an anti-Turkish function. Türkiye is another country that is an integral part of NATO but that unlike other countries such as Italy, it has not renounced its autonomy at the international level. As demonstrated by the position of neutrality with respect to Russia’s military operation in Ukraine where the entire collective West is using the Kiev regime in a proxy war against Russia.

Precisely with regard to Ukraine, the Italian government has confirmed that it wants to operate in perfect continuity with the governments that preceded it, including the supply of weapons. This decision was warmly welcomed by NATO Secretary General Stoltenberg, who said on his recent trip to Rome: “President Putin is carrying out a brutal aggression, but the Ukrainians have managed to liberate part of their territories. This is thanks to the brave Ukrainian soldiers” but also to the “unprecedented support of NATO, including Italy”, which “remains vital, fundamental for Kiev’s progress”. Italy – Stoltenberg recalled – has provided “hundreds of millions of euro in aid”.

Regarding the new government’s policy towards the European Union, the tune does not change. Despite the fact that the strict austeritarian budget rules and the single currency severely penalize the Italian economy.

In her inaugural speech Meloni said: ‘We do not conceive of the European Union as an elitist club with first-class and second-class members, or worse, as a joint-stock company run by a board of directors with the sole task of keeping the accounts in order. The European Union for us is the common house and as such, it must be able to face the great challenges of our time, starting with those that the member states can hardly face alone”.

A fair and more than shareable position, but one that contradicts the facts. In the European Union, for example, there is the so-called Stability Pact, on which the European Commission has proposed a more stringent reform.

According to economics expert Gilberto Trombetta “with the new Stability Pact we will have to cut public spending to reduce debt. Not like the old Stability Pact, which required us to cut spending to reduce debt. Furthermore, the state that does not respect the path of cutting public spending will be put under commission. I don’t know if we realize the enormity of this. It is true that we have been commissariats for decades. Since the defeat of the Second World War in foreign policy, since joining the European Union in fiscal policy, and since joining the Eurozone in monetary policy. But at least they were trying to keep up appearances”.

Skirmishes media aside, these are the crucial issues for Italy and its future. Considering also that huge allocations will be needed to protect Italy’s industrial system and families from high energy prices and soaring inflation. As demonstrated by the German strategy. From this point of view, however, the Meloni government does not seem determined to make the necessary change of course.

Interesting what Giorgia Meloni said in her inaugural speech about Italian policies for the Mediterranean and Africa.

“October 27th will mark the 60th anniversary of the death of Enrico Mattei, a great Italian who was among the architects of post-war reconstruction, capable of forging mutually beneficial agreements with nations all over the world”.

Then proposing a reference to the energy policies implemented by Mattei, she continued: “I believe that Italy should promote a ‘Mattei plan’ for Africa, a virtuous model of collaboration and growth between the European Union and African nations, also to counter the worrying spread of Islamist radicalism, especially in the sub-Saharan area. In this way, we would like to recover our strategic role in the Mediterranean after years in which we preferred to backtrack”.

Here too, it must be repeated: it will be necessary to see whether words will be followed by deeds. And it appears complicated because the players who have lost Italy its strategic role in the Mediterranean are precisely those to whom Meloni has repeatedly reaffirmed her full loyalty. Just like her predecessor Draghi. Without forgetting that the ‘Mattei formula’ was disliked by precisely those powers and those powers from which Meloni has no intention of deviating.

In the final analysis we can state that the Meloni government acts in substantial continuity with the actions of the Draghi government. What will change are the tones and some stances on minor contradictions within the European Union and the Atlantic alliance. The times when Meloni questioned the European Union and the Euro, and condemned the sanctions on Russia imposed after the Crimea meeting, seem far away.

The prevailing idea is that a medium-sized power with few resources at its disposal, like Italy, must remain closely linked to its major ally, real Dominus, the United States of America. And that therefore whoever is in government has no choice but a strict adherence to the most extremist Atlanticism.

A shortsighted vision in a historical phase marked by the end of US unipolarism with a multipolar world under construction and on the rise where a country like Italy would have great opportunities by freeing itself from the Atlanticist and Europeanist stranglehold that currently suffocates it.