Brazil: “A victory for democracy” 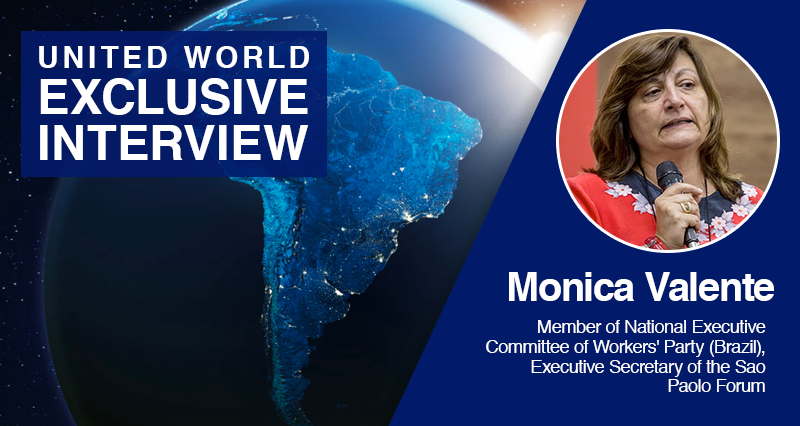 Elections are over, Lula has won and Brazil is in transition to his government, which will take office on January 1st. Lula is Honorary Chairman of the Workers’ Party of Brazil, the leading force in a broad coalition. How does the coalition interpret the election results? How will they establish governability, given the conservative majority in the parliament? What will be in foreign policy the main difference between the coming Lula government and the past of Bolsonaro? Which will be Brazil’s place in the world – and for instance, in the Ukraine conflict? And what is their expectation on how the defeated candidate Bolsonaro will react?

I asked these questions to Monica Valente. Valente is currently member of the National Committee of the Workers’ Party (PT) and the Executive Secretary of the Sao Paolo Forum, the biggest international organization of socialist, leftist and progressive political parties and movements in Latin America. Valente was formerly Vice-President of the trade union of United Center of Workers (CUT) and Secretary for International Relations of the PT.

The interview was conducted by phone.

How do you interpret the result of the presidential, parliamentary and governor elections? What is your basic take away?

The results show a victory for democracy. The Brazilian democracy was very much threatened by the innumerable acts of the Bolsonaro Government: it’s attempts to delegitimize the electronic polls, the electoral judiciary, its purchase of votes, distribution of money for the parliamentarians from his political base, among other things. So it was not an easy victory, as the Bolsonaro government has done everything, illegally or illegally, to achieve re-election. But he did not succeed.

You are also active in international politics. What basic change should be expected in Brazil ‘s foreign policy with presidential change? What will be the most important difference in this area between Bolsonaro and Lula?

We will return to an active foreign policy, as we had articulated during the governments of the PT under the previous presidencies of Lula and Dilma Roussef. We will act under the guidelines of rescuing the sovereignty of the country, actively promoting multilateralism and cooperation in Latin America and in the world. Our goals are to achieve peace, autonomous development with social justice and environmental protection.

You are also the Executive Secretary of the Sao Paolo Forum. Lula has been a great promoter of integration Latin American. Which concrete steps will your government take for the progress of that integration?

We will promote the strengthening of organs of multilateral organizations such as Mercosur, CELAC and reanimate UNASUR. And we will act to promote the autonomous development in our region, respecting the differences and seeking to act on the asymmetries that we still have between our countries.

Other dominant topic in world politics is the conflict in Ukraine. The United States is expanding NATO with Sweden and Finland, while also preparing new cooperation between the alliance and Asian countries. At the same time, Washington does not seem interested in a diplomatic solution and continues to send arms and financing to Ukraine, while trying to isolate Russia and torpedo relations this country has with others, applying sanctions ex territorial.

What will be the position of Lula government? Will you participate in sanctions? Or on the contrary, will he try to strengthen the BRICS as a pole?

President Lula has strong commitment to dialogue, diplomacy and negotiated solutions, as his two periods in Government have demonstrated. His government will be marked by the willingness to help to the construction of peace through of dialogue. He will position himself against military solutions to conflicts or unilateral measures.

It is part of the guidelines of government plan presented in the electoral campaign to return to actively participate in the BRICS.

The world economic crisis is deepening. How is it reflected in Brazil? And how will the Lula government respond to it?

The first initiatives will be address the main, urgent problems of our people: the hunger, the unemployment, the consequences of COVID 19 in the people ‘s health and problems in education.

In the current period of transition between governments, we are precisely working on that: we seek to approve in Parliament laws on re-composition of the budget to meet these emergency demands of the people.

After that, we believe that it is possible resume a project of sustainable development project in integration with Latin America. We constitute a region with more than 600 million inhabitants, therefore a relevant internal market. Our continent has great natural resources and riches. We have a great potential in agriculture and food production as well great energy potential even from renewable sources. Latin America has also great potential for scientific and technological production. The cooperation between our countries greatly amplifies the possibilities, and places us, the region taken as a whole, as a relevant geopolitical and economic pole in the global context.

Concerning domestic politics: The arithmetic of the Brazilian parliament presents a difficult scenario for him Lula government. What problems does the PT expect and how is its strategy to secure governance?

The election of Lula as President occurred precisely because of the ability of him and the PT to build a broad front in electoral terms. Now elected, we continue to expand that broad front even further with other parties and their parliamentarians. The front that elected consisted of 10 parties. Now we managed to expand it to 14 parties with parliamentary representation. The bases of that extension are the proposals for change approved by the people in the elections, especially in the second round.

In the transition process, do you expect steps of disruption by Bolsonarism, and if so, which ones?

There is still a minority, which decreases every day, making public demonstrations next to military units and/or highways, putting in doubt the election results. Judicial institutions are investigating and legally prosecuting them, because these are anti-democratic demonstrations. The institutions even investigate those funding financially this type of attitude.

On our part, in addition to accompanying with due attention the judicial investigation, we are strengthening the organization of our party and that of popular and social movements. We are preparing a great popular party for the inauguration of Lula on the 1st of January in Brasília.