Reconfiguration of global order “an opportunity” for Latin America 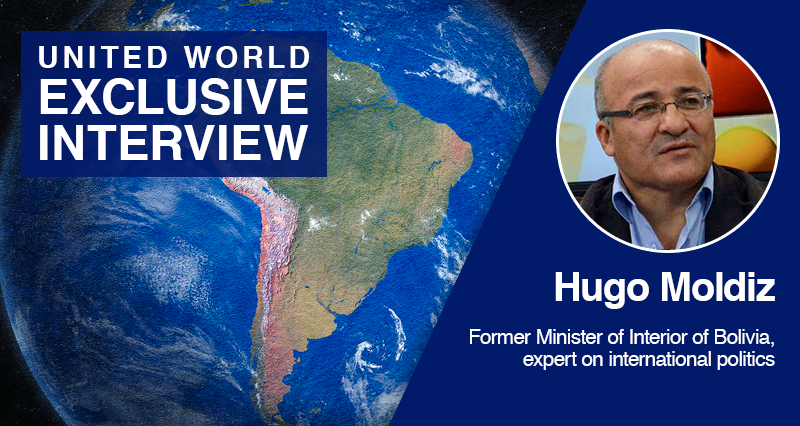 We continue our attempts to catch Latin American perceptions of the Ukraine crisis and the “global transition to a new order”. The quote actually belongs to Hugo Moldiz. A former Minister of Interior in the Evo Morales’ government, Moldiz is today a member of the Guevarist Movement, Army of National Liberation, an expert on international politics and author from Bolivia.

He is a frequent guest in different Latin American mass media organs. He distinguishes himself with a broad geostrategic and geopolitical perspective.

I interviewed Moldiz in Mexico City.

How is the Ukraine conflict perceived in Latin America?

This is not a conflict between Ukraine and Russia. The conflict is just another episode in a longer confrontation. The conflict is part of an inevitable reconfiguration of the world, where the focus both in economic and political terms moves from the Atlantic to the Asia-Pacific.

In my opinion, the conflict reflects a new type of bipolarity. This bipolarity is not ideological, in the sense of capitalism vs. socialism, but more a contradiction of a geopolitical kind.

On one side is the United States, accompanied by the exhausted and old Europe, which already faces inner contradictions and is not homogenic. These are trying to stop this global reconfiguration.

The more the global transition advances, the more the US becomes dangerous

On the other side is a block that is not formalized, but in spite of that, existent. Russia, China and even India. The latter in certain fields has stronger connections to the US, but its more vital interests are tied to China. Another member of that block is Türkiye. Though member of NATO, Türkiye does not want to enter quarrels with those countries that establish themselves as the axis of the new global order.

That does not mean that the United States stops being an important country in the world. But it will have to get used to the fact – paraphrasing Kissinger’s words – that is not the global hegemonic power anymore. It will have to share its role in the world.

But here, we face a great problem: How to get there without war? The United States does not in the equilibrium of power. They want to recreate the world according to their own picture and will.

The closer we get to the end of this transition from the old order to the new one, the more we need to take in account desperate and violent reactions from the US.

“True multipolar world only possible if Latin America joins it”

What does this reconfiguration of the world mean for Latin America?

An opportunity. One that also might be missed. The window is open to create a multipolar world. I am convinced that global multipolarity is only possible if and when Latin America takes part and influences this global reconfiguration and transition.

If not, the only choices for the continent are: align itself with the United States, the closest neighbor we have – a step that would result disastrous. Or include itself into the Sino-Russian block.

This depends on the capacity of Latin America to integrate itself. CELAC is a good space for that purpose, and the current political conjuncture is positive for that goal.

What is your perspective in regards to the Midterm elections in the US? Do you think the results may cause a change in foreign policy?

The US foreign policy has always departed from the same conception – ‘America for the Americans’ – no matter which party ruled in Washington. But the form, how this doctrine was carried out, varied deeply between the Democrats and the Republicans. Both are the same when it comes to oppressive politics via sanctions against countries like Venezuela and Cuba.

The US’ Democratic Party has “always been more interventionist”

From the perspective of dominant classes, the Democrats always offered the chance for a better , say, coordination. At the same time, the Democratic Party has always been more interventionist against those governments that did not follow its policy.

The Republicans in exchange have followed more isolationist policy – and on that way, they also have punished Latin America.

Notwithstanding, these elections will have effects. Either, they will force Biden to take an even harsher stance against Cuba and Venezuela, which they perceive as at the edge of collapse. Or Biden will open some channels for getting air – in order to breathe he himself.

The problem is resulting from what is occurring between Ukraine and Russia, above all, in terms of energy. The United States needs the oil of Venezuela. But the Venezuelan government has made its position clear: As long as the US maintains its attitude of unilateral sanctions, there is not much to talk about.