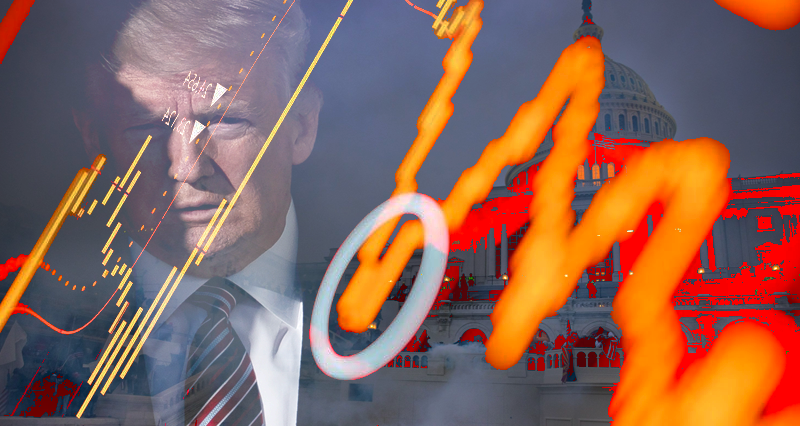 Second part of the series on upcoming elections and beyond in the United States. For the first part, follow this link.

The US is at the crossroads and has entered a process of fundamental decisions.

The US claim to world hegemony, which began after 1945, has failed. The armed might of the Yankees has been insufficient to implement the project of a unipolar world. The ambitions were great, but the power has not sufficed for those ambitions.

What happened to the Dollar as the power of coercion weakened?

As for the economy, the reign of the dollar, which cannot be backed by arms, is crumbling. The US can no longer cover its record foreign trade deficit by exporting dollars. This is reflected on the domestic front in the deepening economic problems of the US people. Under these circumstances, the US ruling classes, in other words the US state, have to make a decision. The people also have to make a decision. Under conditions of deepening political crisis, a political agenda that excludes the people is not viable. The millions who have been taking to the streets since last year are saying, “We are here too”. Those who stormed the US Congress chanted, “This is our house”. This slogan also contains the tendency of the people’s movement and the political decision it carries onto the agenda. The people’s movement is confronting the parliament of the imperialist establishment with the solution of the people’s assembly. This is just the beginning and like all beginnings, it bears the stains of the system.

The swords are crossed

Our analysis has shown that the US crisis was profound that it only could be solved by violence, we concluded that “These events will end at the police station”, to use a Turkish saying for the use of violence between two parties. We have now reached a point where the decisions of the US President, the Congress, the Court or even ordinary police methods cannot ensure stability. In this situation, it seems that the US tradition of solving problems within the law of the system, as in periods of stability, is no longer working. As in the great resolutions of US history, the swords have been crossed and we can already say that they will not be sheathed before achieving a decisive result. US imperialism, which has crossed swords with humanity, is now trying to solve its own internal problems with swords.

The struggle to get control over the Pentagon

It will be remembered that during the election, Trump accused his opponent Biden of relying on the warlords in the Pentagon. Biden had gathered war-rich generals around him. In this situation, there was only one option for Trump: to purge Biden’s generals from the Army and bring in his own men. Trump made this historic move. While US experts in Türkiye and US pedantics in Washington praised the rule of law and stability in the US, we pointed out the showdown in the Pentagon.

New option for the Pentagon

But the developments also offer “surprises” for Trump. The question remains: Do the generals in charge of the Pentagon have to be loyal to Trump? Trump’s fall from grace – he has lost even those around him – and the rising popular movement are providing new to options the Pentagon generals. The military acting independently of political power is a phenomenon that has been observed before in US history. It is not uncommon for the military to act on behalf of a third power option, especially in the state of stalemate. It should not surprise anyone that in the coming period, US generals with the stars on their shoulders will appear on television screens and make speeches saying, “After God comes the people”.

The confrontation between the generals at the head of the Pentagon and the CIA and FBI on Biden’s side is an important conflict line that will determine the coming developments. This positioning is related to the historical decision the US will take. The Pentagon is against Biden’s war policy. Secondly, the Pentagon is also tending to become more independent from Trump.

Truth in the media

There is no chance to understand the developments in the US following the US media, because the media and social media, as everyone has observed, are under the control of the Biden camp. How can we not see that this control even extends to the Turkish media? 1.5 million people are gathering around the Congress. The media counts differently; it sees only 150 thousand people. Only one zero missing! The cameras do not record the masses. Biden’s tune is called on Twitter, Facebook, Instagram, Youtube, the sources of truth for all the simpletons in the world. These channels have started banning and censoring not only within the borders of the US but on a global scale. The political showdown in the US is also escalating in the media.

Armed forces emerging from the votes

In this situation, it is impossible to follow the US developments in the media. Yes, the votes were cast in front of the eyes of the world. But look and see: Armed forces came out of the ballot boxes. If we look at the history of the US, we see that in deepening crises, the final decision is made with arms. To be precise, we are not saying “it is the arms that make the decision”. We are talking about those who own and rule the arms. Is the history of the whole world not similar?

Prophet Muhammad is the most instructive example. He was an armed prophet and the state he founded extended in less than a century from the Great Wall of China to the Atlantic Ocean. It is best to read Machivelli, who points to the armed solution of Mehmed the Conqueror. Those who speak American could not foresee the ongoing process. To analyze the course and path of this process, one needs to speak Turkish, Russian, Chinese, Farsi, Arabic, Spanish or one of the African languages.