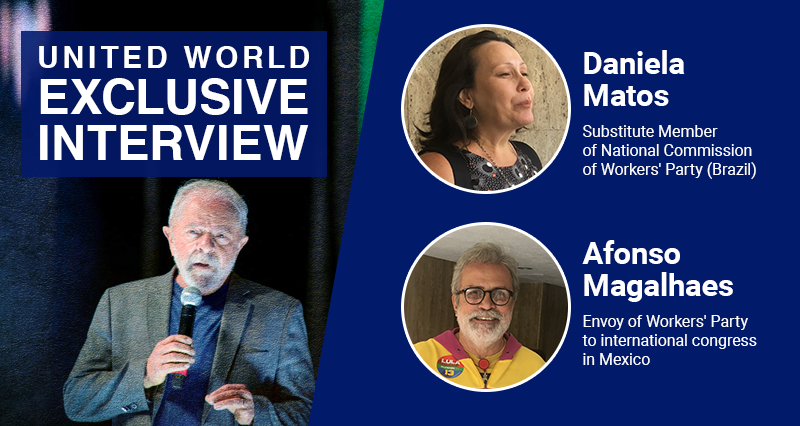 Brazil has completed the first round of presidential elections, with favorite candidate Lula da Silva from Workers’ Party taking the lead. On October, the second round will take place, with Lula competing solely with incumbent President Jair Bolsonaro.

Ahead of the second round, we spoke with representatives of the Workers’ Party about Lula’s expected foreign policy. Our interlocutors were Daniela Matos, Substitute Member of the National Commission of the Workers’ Party, and Afonso Magalhaes, the party’s envoy to the ‘Parties and a New Society Congress’ organized by the Labor Party of Mexico. The interviews were made in Mexico City.

Matos: We have a saying concerning foreign policy: Rarely speaking to friendly governments and frequently speaking to adversary governments. That means, our foreign policy formerly was subdued to that of the United States. It was thought that good relations with the US were more important that those with Latin American or African countries. Now, we are changing that orientation.

Magalhaes: Lula surely will take up again the process of strengthening the construction of a multipolar world, the formation of political and economic blocs, the establishment of popular democracies.

Matos: That means the reactivation of regional integration mechanisms like Parlasur or Unasur. The recent electoral victory of Gustavo Petro in Colombia also offers great chances for cooperation.

But Lula’s election also means that we return to an active policy towards Africa, pursuing investments in that brotherly country as we did before and strengthening economic relations.

Magalhaes: BRICS and Mercosur will surely be reactivated. Same will happen with the Unasur and CELAC organizations. All these institutions have been greatly ignored by the Bolsonaro government.

Does Lula consider himself also a leader for the whole Latin American continent? Does he have the perspective to represent the continent on the global scale more actively?

Matos: Yes, he actually was a leader for the continent in his previous terms. And he has that desire today as well. For instance, President Bolsonaro has completely left aside the BRICS alliance. Lula is going to reactivate the solidarity and cooperation with the BRICS countries and especially with African countries.

“Necessary that NATO is defeated in Ukraine”

Another globally much debated topic is the Ukraine crisis. Here, the United States attempts to isolate Russia both economically and politically by imposing sanctions against that country. These sanctions are applied exterritorialy, that is, Washington also forces other countries to apply them too. What would Lula do if the US pressures Brazil to apply sanctions against Russia, for instance in the sector of fertilizers which are important in bilateral trade?

Matos: The Workers’ Party’s position is clear. We think that this is a war of NATO against Russia on the territory of Ukraine. We know that NATO has pursued a huge number of provocations against Russia, and we all believe that it is necessary that NATO is defeated on Ukraine’s territory.

Our constitution and Lula’s position always expresses respect for the self-determination of people, but for us, it is essential to return to deepening economic and political cooperation with countries of BRICS, such as China and Russia.

“Lula will offer himself as mediator”

Magalhaes: Lula is a politician who gives priority to negotiated solutions. He has always had a good relation with the governments of Russia and with Vladimir Putin himself. But Lula also defends always the peace and considers himself an important actor to achieve peace actively. Thus, he will not stay aside but offer himself as a mediator to solve the conflict – just as he did in other conflicts like Iran, where he played an important role between Iran and the US.

Should we then expect Lula to support the recent initiative of Mexican President Lopez Obrador’s initiative, which called for a cease-fire and the establishment of a group of dialogue?

Asking more concretely: Would Brazil defend its economic sovereignty against US pressure and continue economic relations with Russia?

Magalhaes: In that topic, we have always supported countries under blockade or embargo, for instance Cuba or Venezuela. We have always rejected these blockades or sanctions. Their exterritorial application, that is, forcing third countries to cope with them is deplorable. I am sure that Lula’s government will continue economic relations with Russia.

One response to ““Lula will revive BRICS””