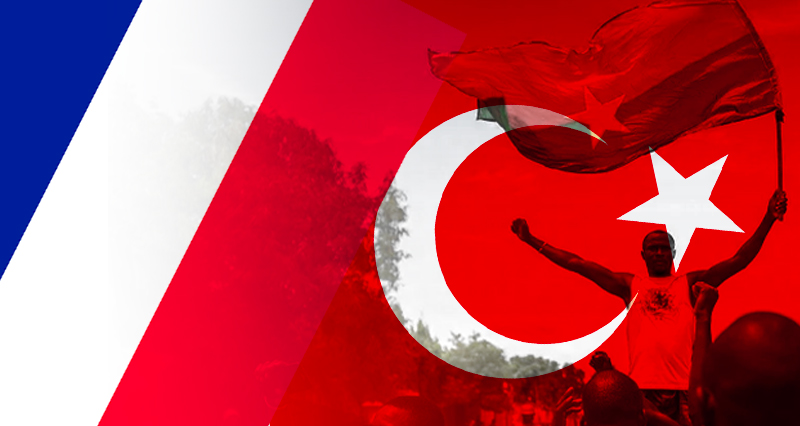 On September 30, a military coup took place in Burkina Faso, the second in 2022. As a result, Lieutenant Colonel Paul-Henri Sandaogo Damiba was overthrown and Captain Ibrahim Traoré replaced him in power. The constitution was suspended, state institutions were dissolved, borders were closed and the army imposed a curfew throughout the country from 9 p.m. to 5 a.m.

Meanwhile, in recent days, people have come out in anti-French rallies, reaffirming the course to defeat neo-colonialism. Against the backdrop of the unstable situation, protesters had earlier rioted outside the French embassy, after which a fire broke out.

Nearly half of Africa was once either a French colony or protectorate: France is now reaping the bitter rewards.

Over the past two hundred years Burkina Faso has experienced a mass of events: coups, French colonization, liberation, and again the struggle for independence. Since the 19th century, the territory was invaded by the French, and in 1897, the land (called by the colonial name “Upper Volta”) was recognized as a French protectorate.

France used the Upper Volta as an official overseas colony, using its people and resources to its own advantage.

The first mass uprising against the French took place in 1915-1917, and independence was proclaimed on August 5, 1960. However, a full-fledged attempt to defend the sovereignty of the state was succeeded only by the legend of Pan-Africanism, Thomas Sankara, who led the lands through a military coup in August 1983 and proclaimed a course for a social revolution. On August 4, 1984, at his initiative, the country was renamed Burkina Faso, which means “country of honest, decent people” (“Burkina” comes from Mossi and means “upright”, “Faso” comes from the Dioula language and means “fatherland”).

Paul-Henri Sandaogo Damiba failed to live up to expectations and a new popular leader emerged. The administrative tasks were partly handled poorly: it is reported that the Cobra special unit led by Traoré had their salaries delayed. Many in Ouagadougou among the people welcomed the coup, believing that Damiba had failed as leader by failing to provide security to entire neighborhoods.

The military coup confirms that in a country of honest people it will not be possible to sit quietly in the managerial chair and profit: the ineffective ones will be replaced quickly, without excessive bureaucratic red tape and pseudo-democratic elections. This is precisely how a state that does not want to fall under a foreign dictate can be governed during unstable times.

So far, the new leadership has not announced details of the transition period: in the previous phase, Burkina Faso and ECOWAS had an agreement to return to civilian rule from July 2024.

In Africa, the fruits of Thomas Sankara, who longed for justice, strength and sovereignty for the country, are only now beginning to sprout. Already in many African states there are protests against French neocolonialism and military interventions of the West.  There have already been two coups in Mali in August 2020 and May 2021, and in Guinea in September 2021. It turns out that since 2020, the coup in Burkina Faso is already the fifth successful one in West Africa.

The new leader of the pan-African movement Kemi Seba, commenting on the events in Burkina Faso, warmly welcomed the new leader and called what was happening “resistance against neocolonialism:

“We are leading a struggle against Francafrique which killed our fathers,which economically and militarily asphyxiates our peoples,and we will go all the way. We are not carrying out any violence against individuals, this is not our paradigm, we are fighting a system, the neoliberal oligarchy. The French proletariat, which is also under the yoke of the French arrogant hyperclass represented by Macron, knows exactly what we are talking about. Our enemies are not ALL the French, but the elite apostle of NEOCOLONIALISM and financial predation. We want Africa to be able to enjoy its resources, we want an end to the terrorism provoked by the Western elite after the cowardly assassination of Gaddafi, we want leaders who submit to the will of their people and not to the will of multinationals. LET US PROTECT BROTHER IBRAHIM TRAORÉ AND FREE BROTHER ZOUNGRANA”.

In recent years, it is precisely anti-French protests that have been taking place in Africa with increasing frequency. Criticism of France in its former African colonies has increased from the realization that its colonial practices and paternalistic attitude never really ceased, and such sentiments are fueled by social media, radio, and protests.

There were rallies in the capital, Ouagoudougou, where residents with Russian tricolors called on the government to ask for help from Russia, and there were even slogans: “We want Russia, we want to cooperate with Mali, down with France!” Why? It’s not because of insidious “Russian influence” and agents at all. It’s just that France has really disappointed the deep peoples of Africa. France, in addition to its bad reputation as a parasitic country siphoning off valuable resources, also failed in Operation Barkhan, designed to destroy the jihadists of the Sahel. As a result of the operation, the jihadists have only strengthened their position, and the problem of terrorism has not been solved. Russia, on the other hand, continues its military assistance – with instructors, equipment, training and assistance in the conflicts. The actions of Russia and Russian military specialists in Mali and the Central African Republic have been effective. Russia is therefore seen as an alternative to France, an alternative security partner.

However, any other non-Western country – Türkiye, China, Iran, the Gulf States – can also take advantage of anti-French sentiment if they want to consolidate their position in Africa

Not long ago in Mali, activists of the Yerewolo movement called not only for the expulsion of the French, but also for the expulsion of UN peacekeepers (Minusma), accusing them of being “an occupation force that fosters and maintains fear, ethnic divisions and mistrust between the communities in Mali. Last year in Senegal, young protesters accused their president of being a puppet of French President Emmanuel Macron and smashed window displays at French gas stations. There was also a clash in Niger last year, where people chanted “No France”.

With Africa gradually blossoming and France becoming independent of its leaders, Türkiye should seize the moment and strengthen cooperation with states willing to cooperate on an equal and mutually beneficial basis: economically, politically and militarily (and also, of course, on the cultural front). Türkiye after the end of the Cold War has already expanded the range of diplomatic contacts, becoming more independent in the choice of partners, and since the late 1990s continues to open towards Africa.

On the military side, the states are already developing stable relations, as evidenced by the delivery of the Baytaktar TB2 drone to Burkina Faso to fight rebel groups. The deal demonstrates that Africa is a new big market for Turkish defense firms (Bayraktar TB2 is also sold in Togo, Djibouti, Libya, Ethiopia, Morocco and Tunisia, as well as in Niger). Experts say exports of defense and aerospace products to the continent has already grown from $83 million in 2020 to $288 million in 2021, and the trend shows positive growth going forward. This is beneficial for Türkiye from an economic point of view, and for Africa to defend itself against terrorists (Al Qaeda and others) in the Sahel and against insurgent attacks.

In addition, Türkiye is a stable humanitarian partner of Burkina Faso: Ankara has declared its support for the country in the face of growing security and food issues. As Türkiye’s envoy to the country Nilgün Erdem Arı said, “Türkiye is ready to support Burkina Faso, which is facing a difficult security, humanitarian and food insecurity situation… There is a strong will between the two countries to enhance cooperation in the fields of economy, trade, culture and especially education.”

Thus, Africa does not need colonizers, but full-fledged partners who respect it and support the real fight against radicals, as well as allow the development of local infrastructure.