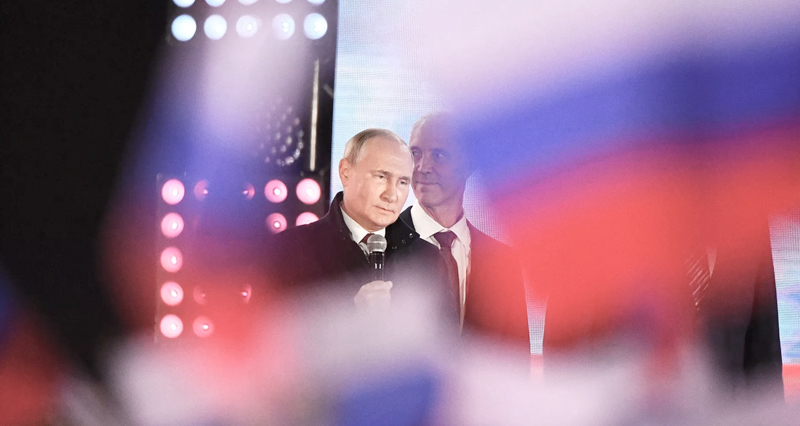 Russian President Vladimir Putin made a speech at the signing ceremony of the agreements on the joining of 4 regions of Ukraine to Russia. United World International expert Mehmet Perinçek evaluated the speech, which echoed around the world, for Sputnik Türkiye.

We are publishing the interview in English.

This is one of Putin’s most crucial speeches. The first one was his speech at the Munich Security Conference in 2007. Another was that he gave today. But this speech was much more important than the previous. He made much clearer and harsher statements. In his speech at the Munich Security Conference, Putin made perhaps the first significant challenge to the Western double standard attitudes and Western hegemony after the collapse of the Soviet Union.

His speech today should be seen as a challenge beyond the previous. Today’s speech was a very programmatic speech. In other words, he touched not only on certain geopolitical issues like the Ukraine issue, but also on many aspects ranging from economics to culture and social life. From the role of the dollar in world domination to the LGBT issue, from the use of nuclear weapons so far only by the US to history and literature, he revealed the contradiction between the West and the Eurasian geography. He clearly explained the confrontation between Eurasian and Russian civilization and the aggressive policies of the Atlantic.

“The world is going through a revolutionary transformation”

The sentence that would summarize all that he talked about is ”the world is going through a revolutionary transformation”. This revolutionary transformation means that the world is no longer a unipolar world, it has become a multipolar one. It means that the reign of the dollar is over. This phrase signifies that alternative powers have emerged to replace the military and political hegemony of the Atlantic. This, of course, clearly expresses Russia’s determination in the coming period. It was an important statement that Russia will not back down in any way, not only on the Ukraine issue, but at every point where it confronts the Atlantic in the coming period, and that it will resolutely assert its rights against the Atlantic aggression.

The US’ anti-European policies

In his speech, Putin said that the US does not allow even its own allies to become free. In fact, he put it best when he said: “Countries like Germany and Japan think they are US allies, but they are under US occupation.” Another emphasis on the fact that America’s policies contradict its so-called allies in Europe was his remarks about the sabotage of the Nord Stream pipelines. He said “Sanctions were not sufficient for the Anglo-Saxons. They have now started sabotage and are completely destroying Europe’s infrastructure”. It is important that in the context of sanctions he distinguished between the Anglo-Saxons and others who are also participating in the sanctions. This was another way in which he drew attention to the contradictions between Europe and the US, and the anti-European dimension in the US aggressive policy towards Russia over Ukraine.

Fraud and deception on grain deal

Perinçek also commented on Putin’s remarks that “Bread (grain) from Ukraine is transported to Europe, while only 5 percent of it to poor countries. This is a fraud and a deception.” He stated the following:

Putin first mentioned this at the Vladivostok Eastern Economic Forum, and he has repeatedly raised the issue since then. In fact, the day after Putin’s statement, Turkish President Erdoğan also supported Putin. Two leaders said that they will make a plan for this issue. Türkiye is one of the parties to the Grain Deal. Both Türkiye and Russia are concerned about it, and both sides are openly stating that.

Why is Ukraine bogged down ?

Ukraine needs to realize what a big mistake it has made by joining the US plan. After the 2014 coup, Ukraine lost Crimea. And now lost 4 more regions by fully engaging in the aggressive policies of the US. But the Kiev regime is so bogged down that instead of taking a lesson from this, they are like a heroin addict, fast on their way to the golden strike. They have applied to join NATO immediately. This shows that they have not learned any lessons, on the contrary, they are moving towards a much more unfavorable situation in the swamp they have fallen into.