Putin: The world has entered a period of revolutionary transformation 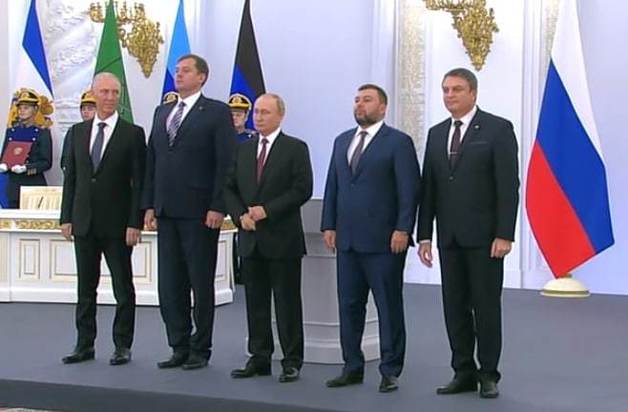 Russian President Vladimir Putin has signed an agreement on the accession of a number of former Ukrainian regions to Russia: the Donetsk People’s Republic (DPR), the Lugansk People’s Republic (LPR), and the Kherson and Zaporozhye regions. The signatures came as a result of referendums in these regions, in which the overwhelming majority of residents said “Yes” to joining the Russian Federation (in each territory more than 96% approved of accession).

“Their results are summed up, the results are known. People have made their choice, an unambiguous choice”, Russian President said.

“I am sure that the Federal Assembly will support the constitutional laws on the admission and formation of four new regions in Russia, four new subjects of the Russian Federation, because this is the will of millions of people”.

Putin also called for a minute of silence to honor all those who died “for the right to speak their native language, to preserve their culture, traditions, faith, for the right to live”.

During the address, Vladimir Putin stressed that this is a right of the people, which is consistent with international law, as Article 1 of the UN Charter enshrines the principle of equal rights and self-determination of peoples.

“I repeat: it is an inalienable right of the people, it is based on historical unity. Generations of our ancestors have fought in its name from the beginnings of ancient Russia over the centuries and have built and defended Russia. They have won.”

From a legal point of view, Russia fulfilled all possible formalities: official ballots were prepared, and international observers were present at the referendums. The results of the referendums are legal for Russia and also legitimate for its allies.

The referendums taking place in the LPR, the DPR, and the Kherson and Zaporozhye regions of Ukraine have precedents in international law and world history. In 1939, Hatay, which was claimed by Syria, became part of Türkiye in the same way after the nationwide referendum. Syria recognized this fact only in 2005, and only informally. In early 2005, visits from Turkish President Ahmet Necdet Sezer and Turkish Prime Minister Recep Tayyip Erdoğan opened a way to discussions between the two states. These discussions resulted with the Syrian government agreeing to end its demand that the province should be returned under Syrian sovereignty as a condition to end hostilities; however, there was no official announcement by the Syrians relinquishing their rights of sovereignty.

Thus, despite the negative reaction of the West, the results of the referendums are legitimate and cannot be reversed.

The world has entered a period of revolutionary transformation

During his address, Putin talked a lot about the collapse of the USSR and its consequences for the country. He noted that although the Soviet Union does not exist and the past cannot be recovered, Russia has something to fight for: its territory, culture, language and traditional values.

His speech also paid much attention to the fact that the world will never be the same, and that the fall of Western hegemony, which has dominated the world for so many years, is already irreversible. Putin reminded the audience that the U.S. has been and remains an occupier, as evidenced by its treatment of Germany, Korea and Japan, under the guise of “equal rights”.

In his address to Kiev, Putin did not fail to mention that he was at the same time addressing its “real masters in the West.”

“The unipolar world built by the West is completely anti-democratic, false and hypocritical… The world has entered a period of revolutionary transformation,” Putin stated.

The Russian president stated that the West – under disguise of democratic speeches – is the real neo-colonizer, instigator of world wars and even a racist block (as Russophobia is also racism, he stressed). And in order to preserve the hegemon’s plunders rent, the West seeks to de-sovereignize states. Moreover, NATO is the first to violate international agreements: in particular, the bloc has expanded to the East, despite promises; missile defence treaties have been broken, interventions into sovereign states have been initiated under false pretenses.

“Their hegemony has the strongly marked character of totalitarianism, despotism, and apartheid. They brazenly divide the world into their vassals, into so-called civilized countries and the rest,” said the president.

Consequences for Ukraine and the world

During his speech, Putin added that negotiations are possible even now – only the results of the referendums in Donetsk, Luhansk, Kherson and Zaporozhye are not in question. Thus, any negotiations between Russia and Ukraine will now not concern these territories.

We can state that by recognizing the republics, Russia is raising the stakes. The decision to recognize the territories was caused by the refusal of Ukraine (and the West standing behind it) to negotiate. Therefore the ball is now in Kiev’s court: the more intransigent Ukraine’s position is, the more it will lose in territories and people. Ukrainian President Vladimir Zelensky has responded by saying that he is refusing to negotiate with Vladimir Putin and is applying for accelerated NATO membership. This is a dangerous step that could lead to an escalation of the conflict and undermine the security of NATO countries.

At the same time, Kiev’s stubbornness will also result in economic problems that will affect other regions as well. In particular, one of the main victims will be Europe, which will bear the brunt of confronting Russia.

Some in the West were expecting harsher statements in Putin’s speech, even going so far as to declare war. However, this did not happen. On the contrary, the Russian leader called for a cease-fire.

“We call on the Kiev regime to immediately cease fire, all hostilities, the war it unleashed back in 2014, and return to the negotiating table. We are ready for that, it has been said more than once,” he said.

Nevertheless, the inclusion of new territories will significantly affect the nature of the military conflict: for Russia, they are now officially recognized as its own territory. Consequently, Russia will consider that it will have the right to use any weapon to defend these territories, up to and including nuclear weapons. However, as Putin pointed out in his speech, it was the United States that used nuclear weapons twice in the world and created such a precedent.

The stakes are also raised by the fact that the rest of Ukraine has applied for accelerated NATO membership. Although it may indeed provoke a war, formal accession to the alliance is an extremely protracted and complicated procedure: first, all NATO members agree to invite a new member, followed by a long ratification period. Meanwhile, it is at least questionable whether all NATO members will agree to let such a destabilized country into the bloc.

Several scenarios are possible. For example, it is theoretically possible to repeat the situation in Northern Cyprus: the de facto border between Russia and Ukraine will run along the line of separation of forces. Russia will consider these territories its own. Perhaps some of their allies will recognize this. In historical precedents a similar situation has already occurred: the border issue between India and Pakistan, where in Kashmir each side has its own perception of the line. Both sides regard Kashmir as their territory. At the same time, the de facto border is the 1949 ceasefire line.

A de-escalation scenario is also possible, but requires diplomatic efforts. So far, only Türkiye has made such efforts, in particular promoting prisoner exchange and attempts at negotiations. The U.S., Britain and European countries are only aiming at escalation of the conflict.

But what will happen if Western arms are used to attack territories that Russia now legally considers its own? The consequence could be a big European war, the third and worst scenario for the whole region.

What could Türkiye do in such a situation? To insist on peace, as its Foreign Ministry does. Theoretically Türkiye could recognize the accession of Crimea and the new territories to Russia, but only in exchange for Russia’s recognition of the Turkish Republic of Northern Cyprus and Türkiye’s maritime borders and interests in the Eastern Mediterranean. The more NATO and the EU (including Greece and South Cyprus), make anti-Russian gestures, the more likely will Russia decide to go down this road. Greece and Southern Cyprus, where the United States is now supplying weapons, are to Türkiye what Ukraine is to Russia. Perhaps Moscow will soon realize this.